Over the last four years, New York City’s foster care system has been transformed by an apparently simple and appealing innovation called kinship foster care. This new initiative now threatens to turn a vital child-protection service into a supplementary welfare program, squandering resources meant for profoundly troubled families, marooning children in foster care far longer than is appropriate, and threatening the integrity of the system itself.

The new program, called kinship foster care, is simple in principle: Instead of placing abused or neglected children with strangers, the city searches for relatives—usually grandmothers or aunts—willing to care for them. The city inspects and certifies these relatives’ homes, provides social services, and oversees the children’s welfare. In turn, kinship foster parents receive the same financial support as regular foster care parents.

What sounded simple in theory, however, has turned out to be problematic in practice. Kinship care has been one of the driving forces behind explosive changes in the size and nature of the system. In 1986, there were 16,000 children in foster care, 90 percent of whom were under the supervision of private agencies. Today there are almost 50,000 children in foster care, nearly half in programs run directly by the city, and payments to foster care parents have nearly tripled to $790 million. (About a third of that comes directly out of the city’s pockets, with federal and state aid supplying the rest.) And while the number of children in regular foster homes has increased by more than 50 percent since 1987 (the first full year of the kinship program), the number of children in kinship homes rose more than 400 percent, from about 4,000 to more than 21,000 today, more than there were in all of foster care five years ago.

“No one expected this at all,” notes William Grinker, commissioner of HRA during the Koch Administration. “The estimates were that there would be at most only 1,000 families involved.” Most troubling, many more of today’s foster kids, especially those in kinship care, appear to be staying in foster care indefinitely, without much prospect of either reunification with their parents or permanent adoption.

Kinship care grew in part because the need for foster care increased with an epidemic of drug use among women of child-bearing age. The boom in crack babies created the “boarder-baby” scandal of the late Eighties, in which newborns remained in hospitals, or were crowded into makeshift dormitories, while awaiting foster care placement. To resolve the boarder-baby crisis, the city raised foster child payments for newly placed children by making many more of them eligible for the “special services” rate of more than $800 per month per child. At the same time, however, under threat of a lawsuit filed by the Legal Aid Society, the city issued new regulations guaranteeing kinship foster parents the same payments as other foster parents. With powerful incentives in place, the number of children in kinship care began to rise quickly.

Many of the crack babies brought two or three older siblings into foster care at the same time. That might seem like a reasonable outcome, except that in many cases the children had already been living with the relatives. As Grinker notes, the city began “creating a system that pays families for doing what they were already doing anyway.” Though “grandfathering” is forbidden by federal regulations, the Task Force on Permanency Planning noted that in 39 percent of the cases it studied, children had been placed with relatives before entering foster care; in 12 percent of the cases, children had been living with relatives for a year or more before becoming foster kids.

Kinship care became, at least in some cases, “a backdoor way to raise welfare,” according to Grinker. For even though the city has tightened up eligibility for the “special services” rate, regular foster care rates are much higher than the payments for which most kinship guardians would otherwise be eligible under the Aid to Families with Dependent Children program. The allowance for each child under AFDC is roughly $110 per month, far less than the minimum of $386 a month available to foster parents. In the task force study most kinship guardians had four or more children under their care. A working grandmother caring for four school-age grandchildren would be eligible for only $440 a month from AFDC, compared to a minimum of $1,820 a month under the kinship foster care program, plus $1,636 a year clothing allowance. For teens, the grandmother receives $526 per child, while the “special services” foster care rate pays $845 per month per child.

An extra $2,000 or so a month in tax-free income is not pin money by anybody’s standard. Word began to get out on the street, and judges began to notice a rising volume of foster care cases in which money, rather than protection, appeared to be a prime motive for keeping the kids in foster care. “I notice many cases where the kids have been in placement for a year or two, and the mother has already done everything the agency asked,” notes Judge Susan Larabee of the Bronx Family Court. “The caseworker can’t articulate any reason why the mother is a danger to the children. But the children’s lawyers are the ones asking for them to remain in foster care, and they are quite frank: It’s the money.” Larabee, who handled 351 neglect and abuse cases in the first three months of 1991, estimates that she sees cases involving questionable use of kinship care at least once a week, and sometimes more. “It’s naive to think people won’t try to get more money for their families,” she maintains.

No one knows how many children were illegally grandfathered into the program nor in how many cases mothers and grandmothers may be living together and still collecting kinship Foster Care, but Judge Larabee is not the only family court judge to notice the problem. One Manhattan judge told the task force the story of a 14-year-old girl in kinship placement. The social workers maintained that the grandmother had said the mother had disappeared. When the judge interviewed the child in chambers, however, a different story emerged.

“Do you care for your mother?” the judge asked.

“Do you ever see your mother?”

“Yes!” the girl answered, “Every day. My mother lives with my grandmother.”

In another case, a drug-exposed infant was born; its 13-year-old sister had lived with the grandmother all her life, but the neglect petition for foster care was drawn for both children.

Kinship care appears to discourage either of the two statutory goals of a foster care case: family reunification or adoption. In a New York State Department of Social Services report, Fred Wulczyn noted that 88 percent of children placed in kinship foster homes in 1987 were still in foster care two years later, compared to only about 40 percent of children placed in regular foster homes. High payments may be discouraging mothers who ought to reclaim their children from doing so. “With welfare, we drove fathers out of the home,” says Grinker. “Now we are going to drive the mother out, too.” But when kinship kids remain in foster care indefinitely, they drive up costs and divert resources from kids who genuinely require the temporary protection foster care was meant to provide.

Moreover, caseworkers are reluctant to push for adoption in kinship cases. Caseworkers are required to set goals for foster children every six months. Among kinship kids, according to the Task Force, the most common goal was return to parent, and this goal was continued year after year, even in cases where the mother had disappeared or was incarcerated long-term, although the law requires that after two years the goal be changed from return to parent, to adoption. “Agencies don’t try to get these kinship kids a home, because the caseworkers consider them already ’at home,’” agrees John Courtney, assistant executive director for foster care at Little Flower Children’s Services, one of the largest private foster care agencies in the city.

The conventional wisdom is that Grandma will not want to get involved in proceedings to cut off her daughter’s parental rights. But Judge Larabee disagrees. “I’ve done a number of kinship adoptions. I think many relatives would be willing to adopt with good social work.” According the Task Force report, “Although people asserted frequently that bias against the adoption of relatives’ children is a cultural issue, the caseworkers had explored adoption in a few cases and found relatives willing to adopt, if it became a possibility.” The many grandmothers who have themselves been abused by their addict daughters might be more than willing to cooperate with authorities and pursue adoption in order to protect their grandchildren.

No one appears to know exactly how much kinship care costs the city: Budget practices make it almost impossible to determine how much of the Child Welfare Agency’s administrative and personnel costs could be attributed to the program. Over the long run, the costs will spiral, eating up an ever larger share of the foster care budget, because children remain in kinship foster homes much longer than in regular foster care. The misuse of kinship foster care diverts the Child Welfare Agency’s manpower and administrative resources from children genuinely in need of the city’s protection.

If the Child Welfare Agency made it a policy to encourage kinship guardians to adopt, many of the problems raised by the program might be resolved. The city would be relieved of the administrative burden of following thousands of cases in which children had found adequate homes with relatives, leaving more time to supervise other kids and guardians in the system. And though the savings to the city would be great, the financial penalty for many of the guardians would not be high: After kids have been in foster care 18 months, they qualify, as hard-to-place children, for subsidized adoptions at three-quarters the foster care board rate.

Adoption would also remove these children from the custody of the commissioner of HRA, transferring full authority for education and medical decisions to the relatives, where it belongs, and force families toying with the foster care system for their own purposes to fish or cut bait.

Misuse of kinship foster care is difficult to detect. There is nothing to stop a young woman from going to court, telling the judge she cannot care for her child, placing the child with her mother, living at home, and splitting the proceeds, or at least enjoying the benefits of a higher standard of living. Nothing, that is, except the integrity of the foster care system, which is being stretched by compassionate social workers, lawyers, and judges anxious to help low-income families. By failing to enforce regulations for kinship homes and routinely extending kinship care, the Child Welfare Agency encourages relatives to view kinship foster care as primarily an income-supplement program-an offer of free cash that few families can refuse. 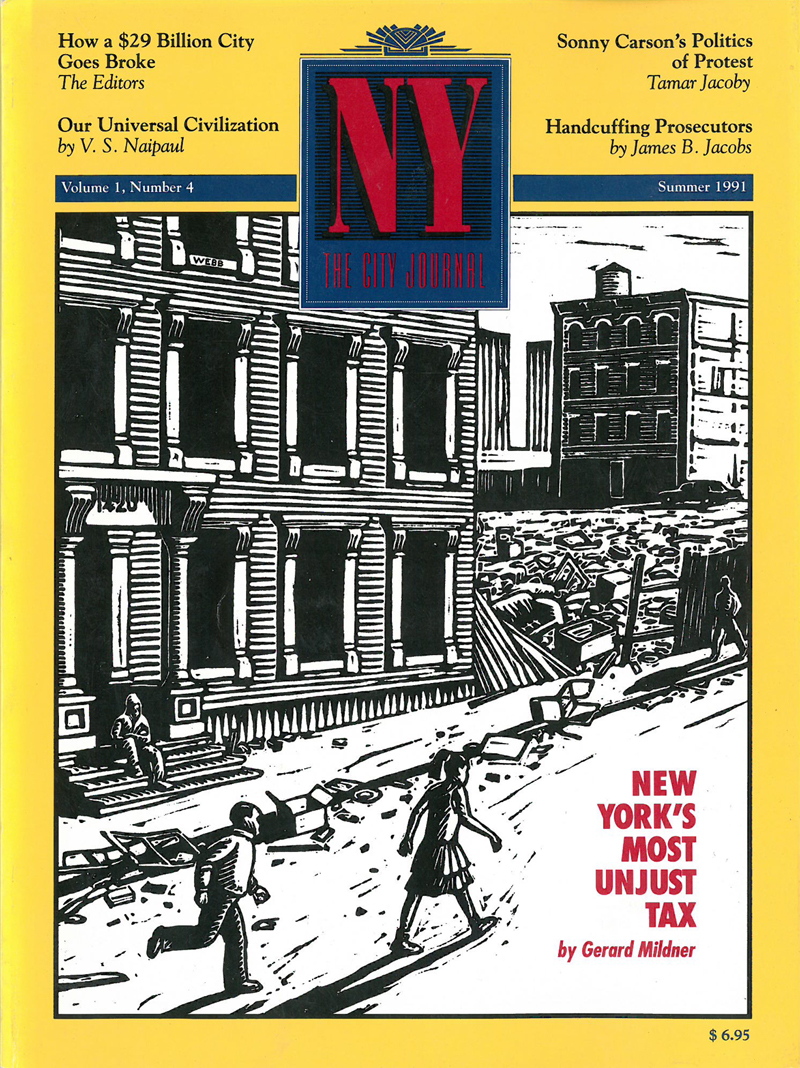 Why Marriage Is Good For You

Maggie Gallagher The data are clear: you’ll live longer, stay saner, get richer, and be happier.
from the magazine

Tomb With a View

Maggie Gallagher
from the magazine