Since 2004, I’ve been directing The Republic, a voluntary weekend program for 14-to-18-year-olds in Angra do Heroísmo, Azores, that involves seminars about Greek classics, monthly long walks, and public readings. Though I originally conceived of The Republic as a conventional effort to get these students ready for the challenges of university academic work, I soon decided that its true mission should be to prepare them for living. The Republic is not about academic grades but real life. Along with great literature, nature makes a wonderful teacher, especially when these teenagers have to make important decisions in challenging outdoor situations. For the students, The Republic is a four-year intellectual and physical adventure; for me, it has been a renewable blessing, one for which I feel continual gratitude.

The program is divided into four classes—Barbarians (ninth grade), Helots (tenth grade), Argonauts (11th grade), and Hoplites (12th grade), with reading lists for each year. In the third year, we devote two seminars to Thucydides’ spectacular account of the Spartan Brasidas’s military campaigns in 424–422 b.c. From Pylos, in the western Peloponnese, to Amphipolis, in Thrace, Brasidas achieved a stellar reputation as a diplomat and general. Every year, on the first Saturday of February, we cross Terceira Island on an 18-mile night walk named after him. In the preceding weeks, to prepare, Helots and Barbarians, who had been reading and discussing the Iliad and the Odyssey, were introduced to Thucydides, Brasidas, and the geography of the Peloponnesian War. Argonauts and Hoplites contributed with their stories about the longest and most feared night of The Republic. The walk has become the stuff of legend, a kind of badge of honor in our program. Seven students from Lisbon’s D. Filipa de Lencastre and António Arroio schools and twelve from Oeiras Internacional School (OIS) joined us. Lennard Girard and Jemma Montefiore, teachers at OIS, accompanied the latter group.

Donald Kagan called Brasidas “the greatest of Spartan commanders, perhaps in all Spartan history.” Indeed, Thucydides shows Brasidas acting quickly and audaciously at night against Megara, Amphipolis, Torone, and Potideia. Brasidas clearly believed that operating at night offered tactical and operational advantages. But what happens at a physical and psychological level during those dark hours? We speak at length about this to prepare for Brasidas’s Walk.

Night, students quickly learn, changes everything. After the first four miles to Altares in the northern part of Terceira Island, there is no street lighting. Dawn was six hours off. Flashlights helped somewhat. At about two o’clock in the morning, we crossed knee-deep peat moss, making everyone tired and wet. “I died there,” a student told me later. “It felt so different and awkward to walk on that type of ground. I thought I was going to sink. My shoes were great but my feet were soaked and cold.” Then the terrain changed again when we reached Pico Gaspar, a small volcano in the center of the island. We stopped. The Hoplites had to reconnoiter. They had been here three times before but needed to adjust their senses and find the narrow northern path to the top. The volcano is different on every visit. Training and experience had taught the Hoplites that at night, things change quickly. Cues were crucial in their attempt to adapt. They took their time. It was their decision to make. 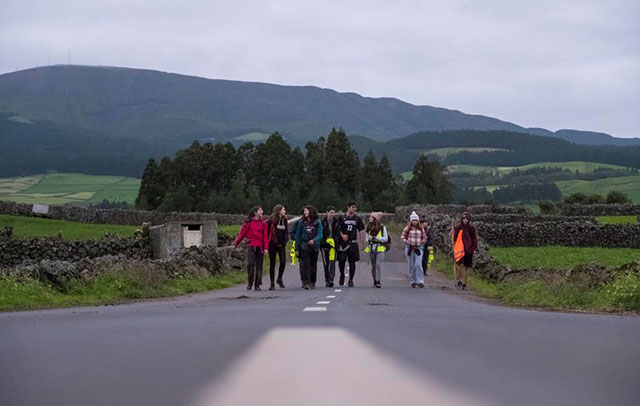 “We couldn’t see a thing!” they told me afterward. “If it wasn’t for the shape of the volcano, we wouldn’t have recognized the place. It was so different at night. The grass was tall and wet, there were lots of holes, brambles all over the place, and we fell several times at the start. We talked and explored but had doubts about the right path until the end.” But they found it, and the rest of us followed. Girard and Montefiore helped them negotiate the climb to the top. Balance, agility, physical coordination, strength, and cooperation were essential on this section of the walk.

Things got dark and claustrophobic when we crossed the woods. For this part of the journey, students handed in their flashlights and mobile phones. Then, slowly, they found their way through the trees and mud in complete darkness. I could almost feel them trying to syncronize their brains with the strange environment around them. Communication between them increased and improved markedly. They understood how easy it is for one to get lost in the dark.

On Terceira Island, our night had started in high spirits. Music and adrenaline were in the air. Beatriz Mamede, Class of 2018 and a future law student, played songs from Xutos & Pontapés, a Portuguese rock band. Others chose hip-hop and “deep house” music. A student from Lisbon played The Greatest Showman soundtrack. Helena Lanova, a gifted violinist, spoke about the beauty of Mahler’s Fifth Symphony. Groups formed; conversations started; chocolates were exchanged. Girard, Montefiore, and I felt compelled to restrain their high spirits, given what lay ahead. They were puzzled. The Brasidas Walk didn’t seem like it would be particularly challenging.

Six hours later, just before dawn, things had changed dramatically. Reality was quite different from what they had anticipated. With a few exceptions, everyone was worn down by the constant movement, darkness, and lack of sleep. “I learned that it is really possible to sleepwalk,” one Argonaut told me. “There were times I no longer knew what I was doing. I just closed my eyes and walked. My feet were killing me.”

“I was so tired,” said another. “Dawn was so difficult. It wasn’t night and it wasn’t day. I just wanted to sleep. Now I understand why Brasidas attacked at night. But how can one fight at this hour?”

“I realized I was listening to Disney songs,” noted a student known for a sense of humor. “Need I say more?”

“The night took away all the adrenaline,” reminisced a young Barbarian. “Daybreak brought no relief because I realized we were still far away from the end. I rested by the road whenever I could. I was so drained I just didn’t care anymore.”

Courage, resiliency, and adaptation take practice. Thucydides’ account of the Peloponnesian War demonstrates how crucial the social, economic, and political contexts are for making informed political choices. Understanding this is vital for the Hoplites, Argonauts, Helots, and Barbarians of the Republic, most of whom will pursue science, technology, engineering, and math (STEM) degrees at the undergraduate and graduate level. They belong to the Google Generation and are fully digital. But as Joseph E. Aoun writes in his book Robot-Proof: Higher Education in the Age of Artificial Intelligence, we all need a new type of literacy. Data and information are not enough for a good education in a free society. 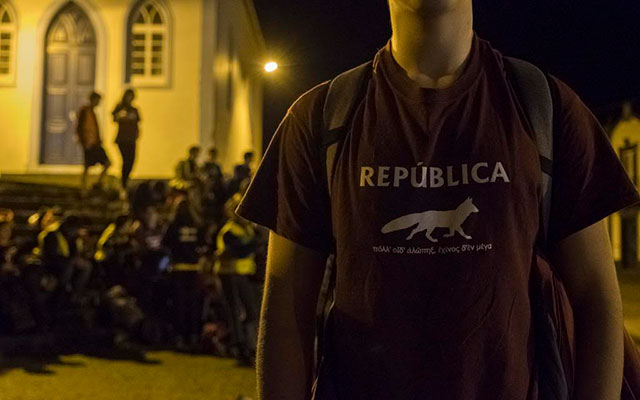 Enter Thucydides, who makes clear that Sparta was different from all the other Hellenic city-states. This had important consequences for the city’s grand strategy. As Paul A. Rahe has written, Spartan policy in the sixth century b.c. was “to keep their Argive enemies out, the helots down and the Arcadians, above all others, in.” The rise of Athens in the first half of the fifth century led Sparta to rethink its strategy and enlarge its network of allies to Corinth and Thebes, outside the Peloponnese.

When war with the Athenians nevertheless came in 431 b.c., Sparta resorted to an offensive strategy to annihilate the enemy and win quickly. Victory, however, proved elusive. Led by Pericles, Athens employed a strategy of exhaustion to make clear to the Spartans that they didn’t have the geography, money, or power to prevail in a protracted war. Athenian victory at Sphacteria in 425 b.c., deep into Sparta’s rear in Messenia, astonished the Hellenic world. “To the Greeks this was the most surprising event of the whole war,” wrote Thucydides. “They had thought that the Spartans would never surrender their arms, in starvation or any other extremity, but would use them to the last of their strength and die fighting.”

Brasidas’s brilliant 424–422 b.c. campaign in Thrace, right at the heart of the Athenian empire’s sea lines of communication and resources, was an attempt to chart a new grand strategy for Sparta and undermine the international legitimacy of the Athenian empire. Victory over a city like Athens, the general argued, would be possible only if Sparta adapted internally and externally. Initially, the majority of Spartans supported him, and Brasidas’s diplomatic and military accomplishments among Athenian allies in Thrace were indeed remarkable. Thucydides, whom Brasidas defeated at Amphipolis in the winter of 424/423 B.C., pays him the highest compliment: “He was the first Spartan sent out to them, he established a reputation for decency in all his dealings, and left them a firm expectation that the others too were of similar character.” Alas, they were not.

Brasidas died in combat in Amphipolis, a victory for Sparta, and he was buried in the city as a hero. Soon afterward, however, Sparta reverted to her traditional grand strategy and sued for peace. War was becoming an acute threat to its internal stability and hegemony in the Southern Peloponnese. Athens, also weakened by war, agreed to terms. Brasidas had understood that his strategic option was losing support in Sparta. Was his final daring run against Cleon, the Athenian commander, in Amphipolis a form of suicide?

It was now seven o’clock in the morning. We had been walking for eight hours. Small groups scattered the road. Angra do Heroísmo, our final destination, was still five miles away. I looked around and saw exhausted faces. I’m sure I looked the same. I am 55. My only advantage is an awareness of the tides at night. Experience taught me that the morning is the most dangerous time of Brasidas’s Walk. Some students feel that they have done enough and are tempted to quit. “We’re going to run a bit,” I told the small group around me. They gave me a worried look but followed when I started to jog. A quarter of a mile later, the jog became a run. “Challenge accepted,” shouted one of the students in the leading group.

We ran with abandonment downhill with our gear and backpacks. Farmers and cows looked at us, puzzled. We pushed harder and ran for another half mile. We stopped at Guerrilhas’s small crossing, gasping for breath, and waited for the others. They laughed at what they had just done. “This is madness,” an Argonaut said.

Perhaps. But it is a special kind of madness—the feeling of being free. I’m grateful for it. I hope that the memory of Brasidas’s Walk will serve this year’s Hoplites, Argonauts, Helots, and Barbarians in real life—as it has served some of their predecessors in The Republic. Now, they have an idea of what night and nature can do to their minds and bodies. They have read Thucydides. And they have done some living, too.

Miguel Monjardino is Visiting Professor of Geopolitics and Geoestrategy at the Catholic University of Portugal in Lisbon and a foreign-affairs columnist of Expresso.

Miguel Monjardino China’s rise has led to pat citations of the Athenian historian, but one must truly study his work to understand it.
eye on the news

Miguel Monjardino Reflections from Europe on Trump, the Western alliance, and the future
from the magazine

Wilfred M. McClay To do so, we must learn, or relearn, the story that connects us with our predecessors, and once again make that story our own.
eye on the news