Beginning in December 2014, Bill de Blasio’s mayoral administration placed significant restrictions on how New York City corrections officers can penalize and restrain violent criminals in city jails, ostensibly to ensure the safety and well-being of inmates and guards alike. But the mayor’s policies seem to have made jails less safe for all concerned, as an examination of the data regarding inmate violence reveals. In 1998, when more than 17,500 prisoners were packed into New York City jails on any given day, inmates committed 6,458 violent assaults. By 2017, the average daily inmate population had dropped to just 9,500—yet the behind-bars violent-assault total nearly doubled, to 12,650.  Much of that rise happened over the last three years, during which violent assaults jumped 43 percent, even as, during that same period, the number of corrections officers increased, from 8,922 to 10,862.

In a jail system with fewer inmates and more guards, what explains the spike in inmate violence? Part of it, anyway, can be attributed to de Blasio’s “focus on equity”—a phrase that appears in the 2017 Mayor’s Management Report more than two dozen times, including at the top of the section covering the city’s Department of Correction (DOC). Equity concerns apparently guided the implementation of reforms regarding punitive segregation (known commonly as “solitary confinement”) and guards’ use of force.

In December 2014, the DOC took punitive segregation off the table for 16- and 17-year-olds—a move inspired, the mayor said, by the story of Kalief Browder, whose case is often cited by jail reformers and the Black Lives Matter movement. In June 2016, the DOC extended the ban to cover 18-year-old inmates. Later that year, the DOC ended punitive segregation for all inmates 21 and younger. As part of the settlement of an inmate lawsuit brought against the city (Nunez v. City of New York), the DOC announced, in November 2015, a new use-of-force policy to address an alleged “culture of violence among correction officers on Rikers Island,” according to the Observer. The new policy placed restrictions on “painfully escorting or restraining inmates without reason, and striking inmates in the groin, neck, kidneys or spinal column.” It also banned “‘high-impact’ force: blows to the previously mentioned areas as well as the head or face, kicking an inmate, and the use of choke holds, carotid restraint holds or neck restraints.”

The Corrections Officers’ Benevolent Association vigorously opposes the new policies, arguing that they have resulted in more attacks on guards. In a recent article, union president Elias Husamudeen argues that exceptions should be made to allow for punitive segregation for young violent offenders. “The majority of violence in our jails is committed by violent inmates who are 21 and under,” he writes.

In the press release announcing the extension of the ban on punitive segregation to inmates up to age 21, de Blasio stressed that the policies were adopted “with safety for staff and inmates foremost in mind.” However, the trend line of inmate violent assaults is pointing in the wrong direction, and it shows a troubling acceleration of a preexisting (but less drastic) upward trend in jailhouse violence. 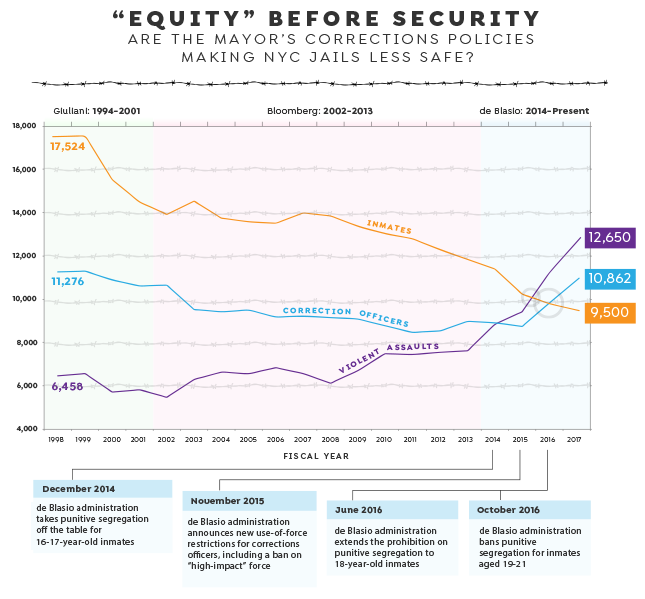 Former DOC commissioner Martin F. Horn believes that the policy shifts and the recent spike in inmate violence are connected. “It’s certainly part of the story,” he says, adding that de Blasio and his team “may have tried to accomplish too much, too fast.” Indeed, the mayor’s own Management Report admits as much: “From July 2016 through February 2017, [the George Motchan Detention Center] experienced higher rates of fights than the corresponding months during the previous year, in part as a result of reducing and eventually eliminating punitive segregation, as well as the co-location of young adults who have historically been involved in disproportionately more violent incidents.” A recent vicious attack at the George Motchan facility left a corrections officer with a fractured spine after being jumped by four inmates—all documented gang members under 20 years old.

Another factor that could be leading to more jail violence is the experience level of the corrections workforce. Horn suspects that a combination of prior hiring freezes, retirements, and a recent influx of new officers has resulted in a higher-than-ideal percentage of corrections officers and supervisors with less than three-to-five years on the job. This problem should have been anticipated; during Horn’s term as commissioner, his team produced “charts projecting a huge surge in attrition in the middle 2010s.”

While the most recent Mayor’s Management Report admits that reducing punitive segregation appears to correspond to a rise in inmate violence, the report argues, circularly, that the successful diversion of nonviolent offenders from jails has concentrated the population of violent inmates, thus leading to more violence: “There is an increasing share of people in custody who face felony charges and have gang affiliations. These inmates are significant drivers of jail violence.” However, the actual size of the high-risk pool hasn’t significantly changed. More guards are available to deal with a high-risk population that is essentially the same size as it was before the low-risk offenders were diverted.

The core function of city government is to maintain security. In city jails, that task falls to New York’s Boldest, but the mayor’s progressive policies have altered the conditions in which they work—and data show that these policies have failed. Will de Blasio heed the counsel of those doing the job and reverse course? Not as long as he puts “equity” before security.

Rafael A. Mangual is the deputy director of legal policy at the Manhattan Institute for Policy Research, where he writes and researches in the areas of criminal justice reform and crime.

What George Soros Gets Wrong

Rafael A. Mangual “Progressive” approaches to law enforcement carry a steep price for the victims of violent crime.
eye on the news

What We Know about the Crime Spike

James A. Gagliano Media coverage leads many Americans to believe that fatal police shootings are far more common than they are.
eye on the news