Fifty-one years ago, in July 1967, in response to an explosion of rioting in poor black urban neighborhoods around the United States, President Lyndon B. Johnson created a National Advisory Commission on Civil Disorders, to be headed by Illinois governor Otto Kerner. The Kerner Commission issued its report seven months later, on February 29, 1968, in what would be the peak year for such disturbances—289, by one tally. From 1964 to 1972, a staggering total of 752 riots occurred, resulting in 228 deaths, 12,741 injuries, 69,099 arrests, and 15,835 incidents of arson.

Most government reports gain brief notice and then languish on a shelf, never again to be examined, except perhaps by historians. The Kerner Report, by contrast, sold more than 2 million copies, putting it on bestseller lists. More important, it became a liberal policy guide, advocating government programs to provide services to the urban poor, police reforms (including an end to white male–only hiring), and billions of dollars in housing programs to end residential segregation.

In assessing the causes of the riots, the Kerner Report famously declared that “white racism is essentially responsible for the explosive mixture which has been accumulating in our cities since the end of World War II.” It warned that a failure to change policies and implement its liberal prescriptions would “make permanent the division of our country into two societies: one, largely Negro and poor, located in the central cities; the other, predominantly white and affluent, located in the suburbs and in outlying areas.”

In retrospect, it’s clear that the report’s explanation of the riots and its prediction about increased racial segregation were wrong. Census data refute the grim forecast. From 1970 to 2010, according to population researchers Jacob Rugh and Douglas Massey, data for 287 metropolitan areas showed steady declines in residential segregation over each of the four decades. While some of the report’s policy prescriptions were adopted, it’s unlikely that these changes were responsible for the decrease in urban segregation. More likely explanations include sharp declines in black poverty rates, reductions in violent crime (especially in black communities), a reverse-migration of blacks from northern cities to the South, massive inflows of immigrants, and inner-city gentrification. Maybe none of these developments could have been predicted in 1968, but in an era in which the old Jim Crow system was already crumbling, it would have been more plausible to forecast a future of less residential segregation, not more.

The Kerner Commission had a blind spot when it came to positive changes in white racial attitudes and black socioeconomic progress. White racism was in sharp decline in the 1960s. Whites overwhelmingly supported the most significant civil rights legislation since Reconstruction, as well as Johnson’s War on Poverty, aimed largely at helping African-Americans. By 1963—before the era of riots—83 percent of whites favored equal-employment opportunities for African-Americans, and 64 percent said that they would not object to having a black neighbor. Indeed, 62 percent of black interviewees in 1968 said that there had been “a lot” of progress in the previous ten or 15 years in eliminating race discrimination. Throughout the sixties, whites became steadily more liberal in their racial attitudes. Two-thirds of whites supported laws to prevent employment discrimination and to spend more money for jobs, schools, and housing for African-Americans. Forty percent endorsed laws against housing discrimination.

Nevertheless, the Kerner Report called urban black communities “ghettos” to emphasize blacks’ limited opportunities for relocation, and it blamed the existence of these neighborhoods on white racism. “White institutions created [the ghetto],” the commission declared flatly, “white institutions maintain it, and white society condones it.” The report also implicated white prejudice in refusing to rent or sell housing to blacks in white communities as another reason for the persistence of residential segregation. The precise role of this factor in the creation of racially segregated neighborhoods is hard to gauge, though, because of the difficulty of determining whether white prejudice or black poverty and preferences were responsible. Many blacks did not want to move into white neighborhoods, “far from the institutions and life of the black community,” as August Meier and Elliott Rudwick put it in their classic text From Plantation to Ghetto. On the other hand, 68 percent of whites surveyed in 1968 thought that blacks “miss out on good housing because white owners won’t rent or sell to them.” While this suggests widespread bias in housing, it also demonstrates whites’ acknowledgment of the situation. The Kerner Commission’s racism charge also may have been an allusion to so-called white flight from the cities to the suburbs, the motivations for which were sometimes racial but often were based on a desire to escape the deteriorating environment of the central cities. 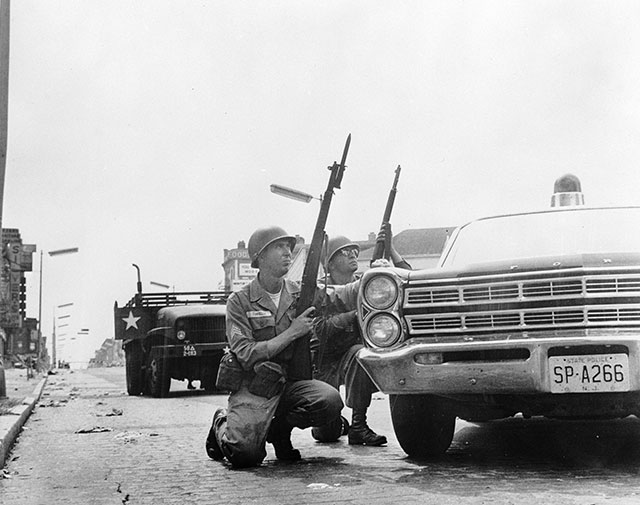 Setting aside the Kerner Report’s assumption that American “institutions” were run by and for whites, it’s hard to accept that these institutions, much less whites generally, maintained and approved of black slums. The creation of large-scale black urban communities was the result of many factors, including, of course, the desire of millions of Southern blacks to move north. Scant evidence exists that whites “condoned” black ghettos, though they may not have known what to do about them.

As for black living conditions, the Kerner Commission emphasized the “severe disadvantage” of blacks compared with whites, finding that “[l]ittle basic change in the conditions underlying the outbreak of disorder has taken place.” This assessment ignored the impressive black economic progress that took place throughout the 1960s. The drudgery of the black tenant farmer was a thing of the past. By 1970, 28 percent of African-Americans held white-collar jobs. Black family income doubled between 1960 and 1970, though it remained at 64 percent of white income partly because of the rise of the black single-parent family. Throughout the sixties, black male earnings increased more than 4 percent per year, while white earnings went up 3 percent annually.

As the economy expanded, black unemployment fell dramatically. In 1960, the black-male unemployment rate was 7.8 percent; by 1970, it had dropped to 4.2 percent, only 1.6 times higher than the white-male rate. Black poverty levels, though more than three times those of whites, also declined sharply. In 1959, 55 percent of blacks lived below the poverty line; in 1970, that figure had fallen to 34 percent, and to only 20 percent in the northeastern states (where most of the riots occurred). Moreover, a burgeoning black middle class had formed, as indicated by homeownership, which, for blacks in 1960, reached nearly two-thirds of white ownership rates. By 1970, African-Americans owned 42 percent of the housing units in which they lived. In short, when the urban disturbances took place, the black economic picture, while not rosy, certainly was not bleak. Black progress was, by almost any measure, considerable, though compared with that of whites, there remained a long way to go.

Close analysis reveals that adversity was not a cause of the riots. For American communities in the late 1960s, the only important predictor of rioting was the presence of an African-American population—regardless of socioeconomic conditions. As Seymour Spilerman, the first to prove this statistically, put it: “the larger the Negro population, the greater the likelihood of a disorder. Little else appears to matter.” Spilerman assessed eight measures of deprivation, including unemployment, family income, and education, in the context of disorders in 673 cities between 1961 and 1968. None of the deprivation factors was positively or strongly related to these episodes. By contrast, the size of a city’s black population correlated robustly with rioting.

The irrelevance of socioeconomic conditions to the riots represents a major stumbling block for those still holding to explanations that focus on black adversity. One could claim, of course, that virtually all blacks were so low on the socioeconomic scale that every city with a significant African-American population was susceptible to disorder. But riots failed to materialize in many cities. Spilerman found that 75 percent of the 673 cities he studied had zero disorders. And even within riot-torn cities, an estimated 85 percent or more of the black population took no part in the disturbances.

The Kerner Commission hinted at, but never pursued, the most likely explanation for the disorder: “the unfulfilled expectations aroused by the great legislative and judicial victories of the Civil Rights Movement and the dramatic struggle for equal rights in the South.” Those expectations were overwhelmingly economic. Martin Luther King himself fused the civil rights movement with efforts to promote black gains in the workplace. Coming to the aid of striking black sanitation workers in Memphis, King declared: “Now our struggle is for genuine equality, which means economic equality.” And President Johnson, in an extraordinary speech at Howard University, declared that the “next and the more profound stage of the battle for civil rights” would seek “not just equality as a right and a theory but equality as a fact and equality as a result.” This sort of talk by national leaders raised expectations beyond anything that government and the law were capable of providing. It is much easier to legislate rights than jobs or wealth. Civil rights laws could ensure that blacks may be seated at lunch counters, but they could not guarantee that blacks would own or manage those establishments.

In one sense, the Kerner Report reflected the liberal optimism of its era: federal programs to provide job training, social welfare, and slum clearance would right the wrongs of racism, it was widely believed. But in its bleak analysis and failure to account for the profound changes that had already been set in motion, the report also signaled the liberal pessimism that has become predominant on racial matters ever since. It’s easier to see, looking back 50 years later, that the United States was headed in the right direction. The great crusade for civil rights not only drove down residential segregation; it also created opportunities for genuine African-American socioeconomic advancement. Yet the Kerner Report remains somehow deathless, its erroneous predictions taken as prophecy, its misguided prescriptions still blocking more constructive approaches to the problems that remain.

The Utility of Incarceration