Dasani Coates, the 11-year-old homeless child profiled in Andrea Elliott’s highly praised five-part New York Times feature, arrived on stage at Wednesday’s inauguration ceremonies to serve as a poignant symbol of—in Mayor de Blasio’s words—“the economic and social inequalities that threaten to unravel the city we love.” But far from providing a window into inequality, the Times series, “Invisible Child,” is better understood as a beautifully reported but muddled revival of decades-long evasions about underclass poverty.

Dasani’s story is moving but hardly new. Anyone who lived in New York—or D.C., Detroit, or Chicago, for that matter—in the 1980s and early 1990s or who has dipped into books like Adrian Nicole LeBlanc’s Random Family knows the general outline. Chanel, Dasani’s mother and herself the daughter of a welfare-dependent drug addict in Brooklyn, has six children by three different men, a long history of debilitating drug use, an explosive temper, and numerous arrests. Her husband, Supreme, has brought his own drug addiction and two more children by a deceased wife into the mix; Elliott makes vague reference to previous children as well. At some point, Supreme worked as a barber, but as far as we can tell, Chanel has never held a job. In truth, she isn’t much of a mother, either. She is often “listless from methadone”; the family’s room is filled with “piles of unwashed clothes.” Dasani appears to be the primary caretaker of her seven siblings. She wakes up early to change and feed her baby half-sister and get the other children ready for school; understandably, though her school is only two blocks from the shelter, she is chronically late. What role, if any, her parents play in this morning chaos known to every mother and father, rich and poor, is left unsaid.

Elliott is an honest enough reporter to admit “parental dysfunction.” But, as she told Times public editor Margaret Sullivan, she wanted to center her story on a child in order to avoid “the politics of blame”—referring, presumably, to those who have found fault with Chanel and Supreme’s many precursors. True to the progressive spirit, Elliott implies that the structural forces arrayed against Chanel and Supreme are so great that the two are powerless to help their children. (It should be mentioned that in Elliott’s nearly 30,000 words, she makes not a single reference to Dasani’s genuinely invisible father.)

But on several occasions, “Invisible Child” unwittingly reminds us that there might be ways out of the family’s misery. Chanel inherits $49,000 on her mother’s death; within a short time the money is gone, and she can’t figure out where it went. A local charter school, the lifeline for many other poor parents and children, advertises its “rigor and excellence”; Elliott sniffs that it sounds “exclusive.” In the wake of welfare reform—howlingly protested by the New York Times, by the way—Chanel’s mother, Joanie, “turned her life around,” landing a $22,000-a-year job cleaning subway cars. Calling her first day of work the “the happiest day of her life,” she was able to save enough for “a cozy apartment in Bedford Stuyvesant” and to earn a pension that would be inherited—and apparently squandered—by Chanel.

Like most progressives, Elliott seems immune to the lessons of Joanie’s success. If Chanel and Supreme both worked full-time at minimum wage, she tells us, their combined salaries would come to only $2,300 per month—just enough to cover “the average rent for a studio in Brooklyn.” Not only does she wildly exaggerate rental costs (the New York City Department of Housing and Preservation reports median rent for all vacant apartments, not just studios, in 2011 as $1,100), but her calculations also don’t take into account the Earned Income Tax Credit; Social Security; food stamps; nutrition programs for women, infants, and children; and Supreme’s widower benefits, among other public sources of aid. It might not add up to much, but it would mean giving life to what Elliott calls “abstractions like . . . self-reliance.”

Elliott is less equivocal in casting blame when it comes to problems outside the personal control of her impoverished subjects. In the case of the Auburn Family Residence, where Dasani, her seven siblings, and her parents sleep on six decaying mattresses, she makes a successful case for outrage. Leaking pipes, armies of mice, and creeping black mold add the finishing touches to the freezing 520-square-foot space. The women and children use a communal bathroom, with toilets frequently clogged with vomit and feces; sometimes strange men come around peeping, or worse. Security guards and caseworkers keep busy by humping their clients while food workers serve rancid meals. The contrast between the horror of the Auburn shelter and Dasani’s own spirited intelligence and guileless devotion to her family explains the understandable outpouring of sympathy that has followed the series’ publication.

Elliott’s other target—inequality, or “a neighborhood’s profound divide,” as she calls it—reveals the ideology that guides her project. She often refers to Brooklyn’s growing affluence with barely disguised distaste: the gleaming residential towers, the wine store with its sommelier tastings, and “the whims of the wealthy.” The reality is that inequality is a mixed blessing for Dasani. It’s true that before gentrification, Fort Greene was more equal: everyone was poor. Many residents also faced the chronic threat of violence—one scourge, at least, from which Dasani and her family appear relatively free. More important, underclass poverty of the sort that threatens Dasani and her siblings preceded incoming mayor Bill de Blasio’s “tale of two cities” by decades. Ironically, by blurring Bloomberg-era inequality with the perpetual carelessness of Chanel and Supreme, the Times diminishes those workers who are genuinely struggling with stalled median wages, working poverty, and poor skills.

The reason for this confusion is clear: in the progressive mind, there is only one kind of poverty. It is always an impersonal force wrought by capitalism, with no way out that doesn’t involve massive government help. Progressives blame lack of compassion—and the city’s failure to provide more services—for tragedies like Dasani’s, but they’re mistaken. It in no way excuses the appalling conditions at Auburn or the incompetence of Homeless Services to note that, even if she were living in a four-bedroom apartment, Dasani’s situation would remain awful. The shelter did not cause her mother’s drug problems, violent temper, or indifference to her children’s development and education. Living in an apartment, Dasani will still be late for school because she’s busy feeding and clothing her seven siblings while her jobless parents nod off on methadone.

What Dasani’s story really proves is what progressives don’t want to admit: how tough it is to free a child from the “choices” of her parents. “When they’re happy, I’m happy,” the remarkable Dasani says. “When they’re sad, I’m sad. It’s like I have a connection, like I’m stuck to them like glue.” That’s the thing about kids. Even the best social services cannot unglue them.

Kay S. Hymowitz is a City Journal contributing editor and the author of Marriage and Caste in America: Separate and Unequal Families in a Post-Marital Age. 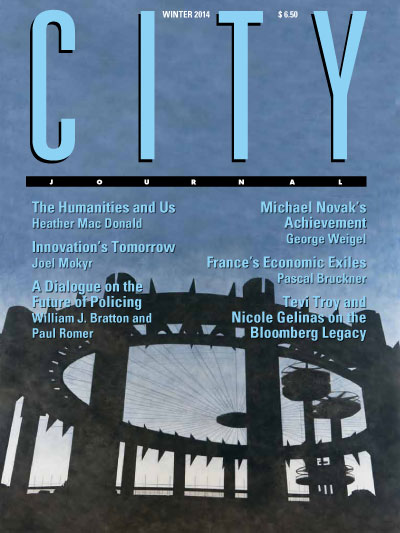 Kay S. Hymowitz “Woke” critics express outrage that men stay away from a movie with little to offer them.

Kay S. Hymowitz As the Golden Globes host, he rightly debunked the loudest, most self-inflated hypocrites around.
More on