A Day to Remember

The right notes for it would have been the singing of blackbirds and the ringing of the blacksmith’s anvil. But, as the world soon knew, the music of that sunny morning was the guns. They had never spoken before with so huge a voice. Their sound crossed the sea. In Southdown villages the school children sat wondering at that incessant drumming and the rattling of the windows. That night an even greater anxiety than usual forbade wives and mothers to sleep. The Battle of the Somme had begun.

The purpose of the “The Big Push,” as the British called it, was straightforward: to draw German forces away from Verdun and to break the stalemate on the Western Front by inflicting a massive blow against the German defenses in Picardy along an 18-mile front, from Gommecourt in the north to Montauban in the south. As it happened, the Somme’s first day remains the worst that the British army ever suffered. Very little went as planned, and what Churchill referred to as its “melancholy and prodigal slaughter” still staggers the imagination. On that first day of July, the British lost nearly 20,000 men, with 40,000 wounded or missing.

Many fine historians, including Denis Winter, Trevor Wilson, Robin Prior, John Keegan, Michael Howard, Gary Mead, and Hew Strachan have produced fascinating studies of the Somme. Now, in Elegy, another good one, Andrew Roberts, has written a masterly and moving account of the Somme’s first day to honor its centennial. Elegy is an evenhanded, elegant overview that does justice at once to the complexity of the battle and the bravery of the men who fought it. Drawing on rich historiography, Roberts recreates not only the battle’s harrowing first day but also the strategy, tactics, and preparations that went into its planning and execution. He also makes incisive use of contemporary accounts, including Siegfried Sassoon’s Memoirs of an Infantry Officer (1930) for the British experience of the battle, and Ernst Jünger’s novel Storm of Steel (1920) for the German experience.

The British encountered a battlefield altogether different from what they expected. Assured that the seven-day, pre-battle bombardment would knock out enemy defenses, they were met, instead, by German machine-gun fire at every turn. The deep German dugouts withstood the bombardment almost entirely intact, and when it ended, the Germans simply put their machine guns in place and fired at will at the pitiably exposed, advancing enemy. The British also had to contend with the German wire, which the bombardment’s shrapnel left uncut. Those who were not immediately hit were pinned down or forced to find shelter in shell-holes. 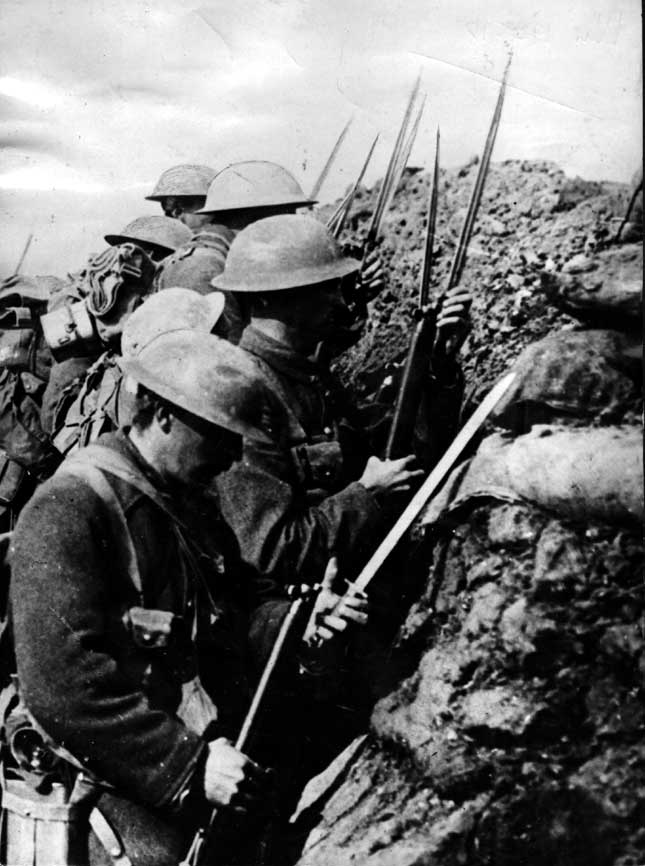 Tragic irony abounded. Generals Sir Douglas Haig and Sir Henry Rawlinson, the battle’s chief architects, assumed that the obliterated enemy trenches would need to be rebuilt. This was their justification for saddling each infantryman with over 60 pounds of equipment. That few made it past their own trenches, let alone the German ones, made this a particularly galling miscalculation.

Rawlinson also instructed officers to have their men walk, not run, across no-man’s-land, on the assumption that there would be no need for haste before German defenders who had been rendered defenseless. This order was countermanded only after waves of troops had been mown down. Moreover, Rawlinson was convinced that the Germans who did survive would make easy targets because of the higher ground the German positions commanded. Yet it was precisely this higher ground that enabled the enemy to see and react to the British infantry’s every movement. As Roberts observes, “From the German trenches at . . . Beaumont Hamel today, it is easy to spot with the naked eye individuals standing where the Newfoundlanders’ trenches were sited.” The Newfoundlanders, whose ordeal opens the book, suffered some of the worst losses of the day: 89 percent were killed or wounded, 684 in all, including all 26 officers.

There were exceptions to the general debâcle. The Ulstermen of the 9th Royal Inniskilling Fusiliers, fighting on what was then the 226th anniversary of the Battle of the Boyne, were awarded four Victoria Crosses for their work taking Schwaben Redoubt, along with 400 prisoners. But they encountered cut wire, and, in any case, they lost 5,104 men, more than a third of the division. Moreover, they could not hold the ground they won: the failure of other divisions to match their advance, not to mention the German counterattack, made sure of that. When Haig heard of the Ulstermen’s gains, he advised that they “advance to the enemy’s second line,” to which Roberts mordantly responds: “The fog of war was rarely foggier.”

Seeing the pre-battle bombardment from the air, in which 1,627,824 shells were fired, Cecil Lewis, the famous ace, and, later, author of Sagittarius Rising (1936) was convinced that “Nothing could live under that rain of splintering steel.” This was why so many were convinced of the likelihood of the bombardment’s success, and why Haig held an Indian corps of cavalry in reserve in anticipation of the breakthrough he was certain would ensue. What went wrong? In addition to the depth of the German dugouts, the hastily assembled ordnance was often defective, detonating prematurely or not at all. Yet even well-made ordnance could never have knocked out the German trenches. Haig’s 400 heavy and 1,000 field guns were simply insufficient for so large a front. 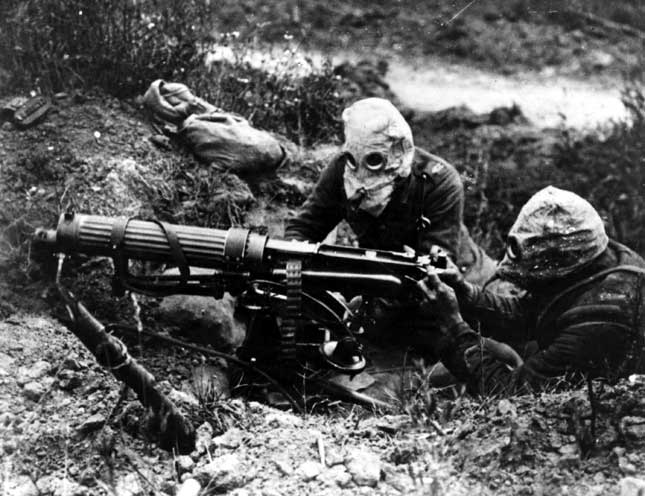 The casualty toll for the British was 35,494 wounded, 19,240 killed, 2,152 missing, and 585 POWs. Nearly half of the 120,000 men who went “over the top” became casualties. These numbers have to be seen in terms of the numerical superiority the British enjoyed: their 143 battalions were pitted against 32 German battalions, which made the scale of defeat all the more stunning. Speaking of the crucial contribution that Hiram Maxim’s invention made to the battle, Roberts parodies Churchill: “Never in the field of human conflict could so many be killed so quickly by so few.” (The Germans lost “only” 12,000 men.) Certainly, it was providential that Lord Kitchener never lived to see the fate of his New Army. As one wag put it: “Two years in the making and ten minutes in the destroying: that was our history.” Still, as one German eyewitness wrote, the Somme’s first day was “an amazing spectacle of unexampled gallantry, courage and bull-dog determination on both sides.”

Robert brings equanimity and shrewdness to his reading of a battle that remains highly controversial. Though appreciative of Haig’s deficiencies—his uncritical confidence in his artillery and intelligence, his excessive planning, his reliance on group think, which was indicative of his lack of confidence in both his officers and his infantry—he still gives grudging praise to a man who learned from his mistakes and did the best he could with an admittedly poor hand. In this regard, Roberts rejects Erich von Ludendorff’s claim that “The English Generals are wanting in strategy. We should have no chance if they possessed as much science as their officers and men had of courage and bravery. They are lions led by donkeys.” As Roberts says at the outset, “If there was a way of fighting the First World War that did not involve trying to smash frontally through formidable enemy defenses, neither side discovered one.” Nevertheless, Roberts shares Ludendorff’s high opinion of the courage of the British infantry, agreeing with what one of Frederic Manning’s characters says in that wonderful novel of the Somme (Hemingway’s favorite), The Middle Parts of Fortune (1929): “They can say what they bloody well like . . . but we’re a fuckin’ fine mob.”

When it comes to Haig, no one could improve on Churchill’s amusing portrait in Great Contemporaries (1937), where he finds the perfect analogy for the man cordially known as “The Butcher,” likening him to “a great surgeon before the days of anesthetics, versed in every detail of such science as was known to him: sure of himself, steady of poise, knife in hand, intent upon the operation; entirely removed in his professional capacity from the agony of the patient, the anguish of relations, or the doctrines of rival schools . . . He would operate without excitement, or he would depart without being affronted; and if the patient died, he would not reproach himself. It must be understood that I speak only of his professional actions. Once out of the theatre, his heart was as warm as any man’s.” 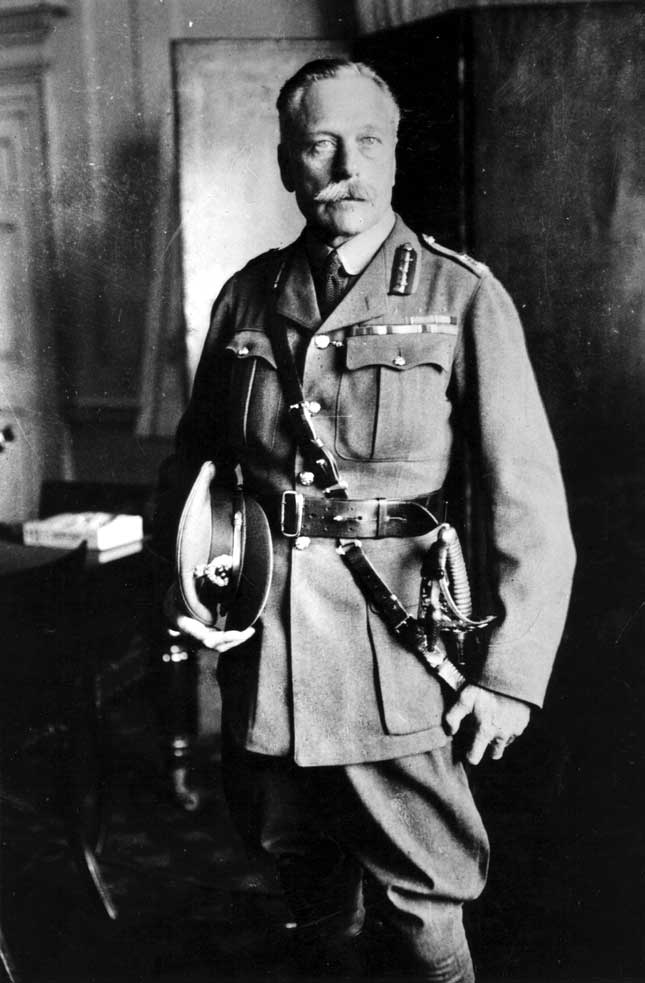 Roberts is adamant that Haig’s most notorious battle, for all its horrors, was not futile. Despite Britain’s taking 450,000 casualties when it was finally over in November 1916, the battle forced General Erich von Falkenhayn to withdraw heavy batteries from Verdun and wrested the initiative away from the Germans. The Somme might not have broken the stalemate on the Western Front, but it paved the way for that otherwise elusive breakthrough. Roberts also appreciates how Churchill and Sir Alan Brooke applied the lessons of the Somme to their strategic conduct in World War II, in which, as Robert says, they “put off the return to the Continent for four years after the retreat to Dunkirk, preferring to fight in North Africa and Italy, rather than risk a direct assault on France and Germany,” which would only have entrapped them in precisely the same war of attrition that bedeviled the Allies on the Western Front. (“Attrition,” as John Keegan wrote in The Face of Battle, “is a game at which two can play.”) 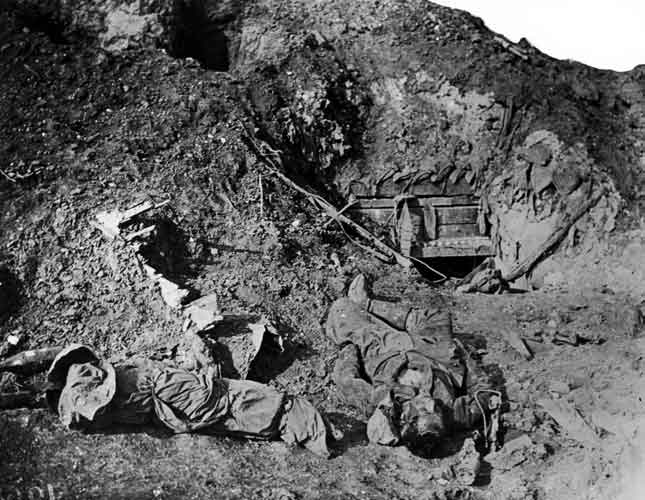 What finally makes Robert’s book special is that it never loses sight of the human dimension of the war. The voices of the soldiers whom the Somme changed forever are heard on nearly every page. Blunden, concluding his broadcast, gave voice to a truth that has not always been acknowledged: “What men did in the battle of the Somme, day after day, and month after month, will never be excelled in honour, unselfishness and love.” Roberts, in his solicitude for the men who underwent this terrible trial, and in his judicious, revelatory scholarship, proves himself a worthy historian of their embattled good faith.

Edward Short is the author, most recently, of Adventures in the Book Pages: Essays and Reviews.

Top Photo: Scottish troops advancing in the attack near Arras, during the Battle of the Somme (Photo by Hulton Archive/Getty Images) 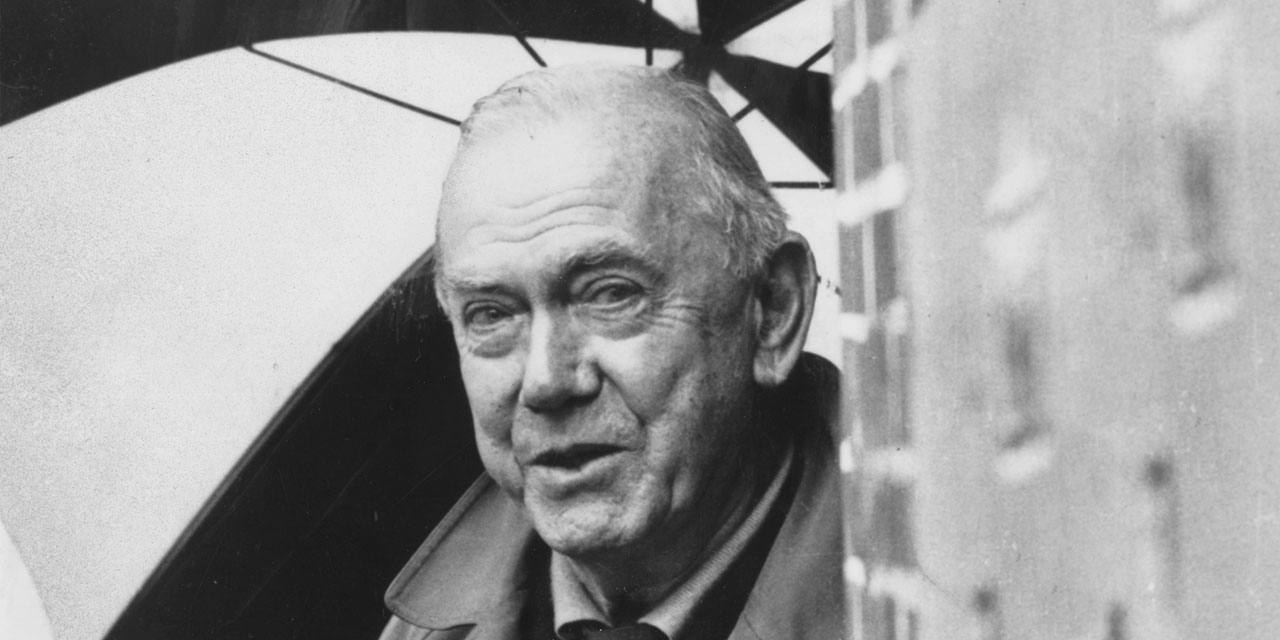 Edward Short In brisk, cinematic prose reminiscent of the author’s own, Richard Greene shows his subject both fair criticism and sympathy. 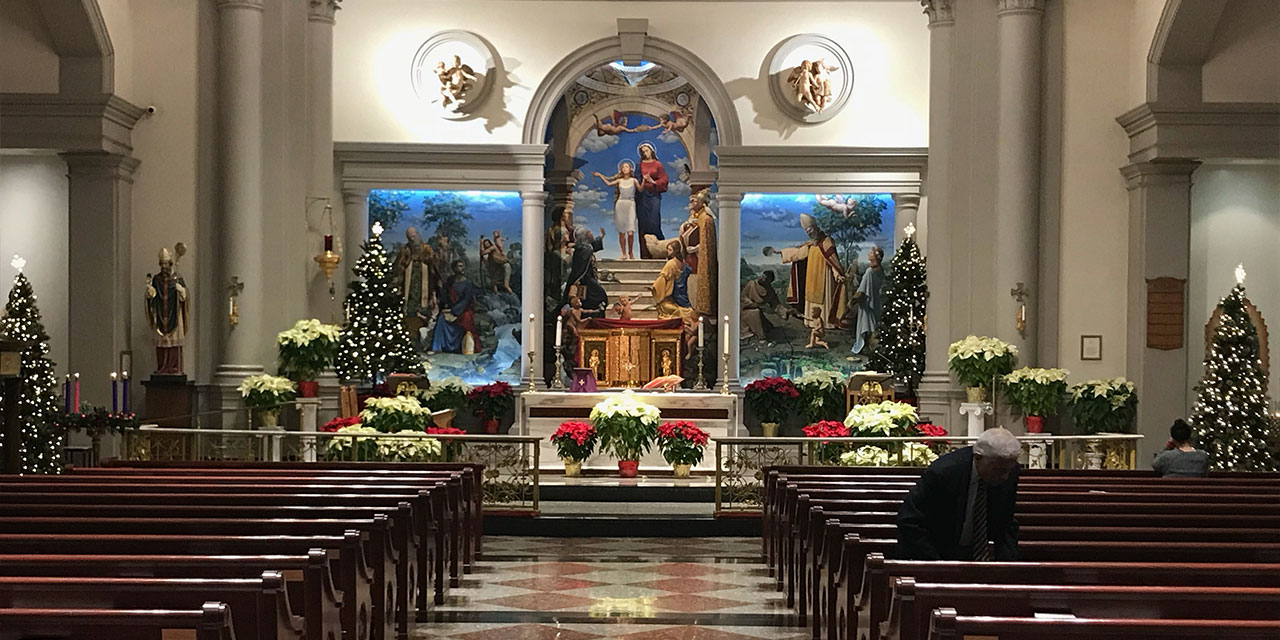 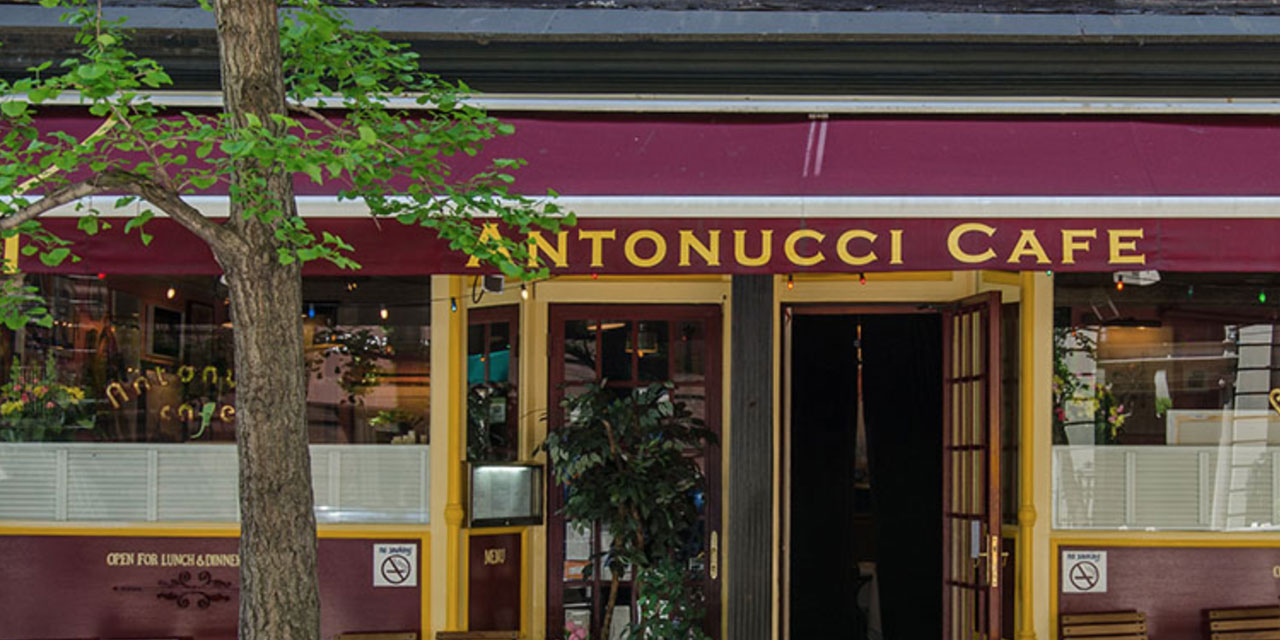