From Culture to Cupcakes

Even before its students rioted in the streets, distressed that right-wing provocateur Milo Yiannopoulos would dare to open his mouth in their presence, the University of California at Berkeley presented a visual illustration of the academy’s decline from a place of learning to a victimology hothouse. Within walking distance on the Berkeley campus are emblems of both a vanished academic world and the diversity-industrial complex that has ousted it.

A first-time visitor to the Berkeley law school would be startled by the two long quotations, in Bauhaus-era typography, that adorn its otherwise brutalist facade, so anachronistic has their rhetoric become. On the left is a passage by Supreme Court Justice Benjamin Cardozo, from a 1925 speech at the Albany Law School:

You will study the wisdom of the past, for in a wilderness of conflicting counsels, a trail has there been blazed. You will study the life of mankind, for this is the life you must order, and, to order with wisdom, must know. You will study the precepts of justice, for these are the truths that through you shall come to their hour of triumph. Here is the high emprise, the fine endeavor, the splendid possibility of achievement, to which I summon you and bid you welcome.

As if that were not antique enough, on the right side of the entrance are words from Oliver Wendell Holmes, whose seat on the Supreme Court Cardozo filled in 1932. The passage comes from an 1885 address to the Suffolk Bar Association:

When I think thus of the law, I see a princess mightier than she who once wrought at Bayeux, eternally weaving into her web dim figures of the ever lengthening past—figures too dim to be noticed by the idle, too symbolic to be interpreted except by her pupils, but to the discerning eye disclosing every painful step and every world-shaking contest by which mankind has worked and fought its way from savage isolation to organic social life.

No law school today, if erecting itself from scratch, would think of parading such sentiments on its exterior. They are as alien to the reigning academic ideology as the names of the great thinkers, virtually all male, carved into the friezes of late-nineteenth-century American campus buildings. Cardozo’s and Holmes’s invocation of “mankind” is alone cause for removal, of course, but equally transgressive is their belief that there is wisdom in the past and not just discrimination. They present learning as a heroic enterprise focused not on the self and its imagined victimization but on the vast world beyond the self, both past and present. Education is the search for objective knowledge that takes the learner into a grander universe of thought and achievement. Stylistically, Cardozo’s elevated tone is as old-fashioned as his complicated syntactical cadences; his exhortation to intellectual mastery is too “masculinist” and triumphal for today’s identity-obsessed university.

To Cardozo’s ornate grammatical style, Holmes adds poetical imagery combining classical mythology with historical legend; this allusive rhetorical tradition has disappeared from public discourse. Holmes’s Whig view of history as an upward progression violates the current academic obsession with the alleged ongoing oppression of the “other” in Western society. Both thinkers’ celebration of the law overlooks the teachings of critical race theory, which purports to expose the racial subtext of seemingly benign legal concepts. And they fatally omit any mention of “inclusion” and “diversity.”

There’s not a trace of the heroic on the Berkeley law school’s website today; the closest it comes to any ennobling inspiration is the statement: “We believe that a Berkeley Law degree is a tool for change, both locally and globally.” What the study of the past can offer is left unspecified.

But this bland expression of progressive ideology is positively Miltonic compared with the bromides on display just meters away from the law school. UC Berkeley’s Division of Equity and Inclusion has hung vertical banners across the main campus reminding students of the contemporary university’s paramount mission: assigning guilt and innocence within the ruthlessly competitive hierarchy of victimhood. Each banner shows a photo of a student or a member of the student-services bureaucracy, beside a purported quotation from that student or bureaucrat. No rolling cadences here, no mythical imagery, no exhortations to intellectual conquest. Instead, just whining or penitential snippets from the academic lexicon of identity politics. “I will acknowledge how power and privilege intersect in our daily lives,” vows an Asian female member of the class of 2017. Just how crippling is that “intersection” of “power and privilege”? The answer comes in a banner showing a black female student in a backward baseball cap and a male Hispanic student, who together urge the Berkeley community to “Create an environment where people other than yourself can exist.”

A naive observer of the Berkeley campus would think that lots of people “other than himself” exist there, and would even think that Berkeley welcomes those “other” people with overflowing intellectual and material riches. Such a misperception, however, is precisely why Berkeley funds the Division of Equity and Inclusion with a cool $20 million annually and staffs it with 150 full-time functionaries: it takes that much money and personnel to drum into students’ heads how horribly Berkeley treats its “othered” students.

A member of the student-services bureaucracy reinforces the message of continual oppression on her banner. “I will be a brave and sympathetic ally,” announces Bene Gatzert of University Health Services. Cardozo and Holmes saw grandeur in the mastery of the common law; today’s campus functionary sees herself in a heroic struggle against the ubiquitous forces of white-male heterosexual oppression. The au courant concept of “allyship” divides the campus into the oppressed, their allies, and the oppressors. If you are not in either of the first two categories, you’re by definition in the third. “Allies” are needed if oppressed students at UC Berkeley—the country’s most elite public university, endowed with libraries and laboratories that are the envy of the world—are simply to survive their ordeal.

One of Berkeley’s likely oppressors offers a suitably groveling banner: “I will think before I speak and act,” promises a white male student from the class of 2016. Ordinarily, such a vow of self-control might seem like a bourgeois virtue worthy of Ben Franklin. In the current academic context, however, it means: “I will mentally scan the University of California’s official list of microaggressions before I open my mouth to avoid expressing an offensive belief in colorblindness, meritocracy, or the value of hard work.”

The head of the bureaucracy that created the banner campaign weighs in with her own banner. “Respect the full humanity of others,” urges Na’ilah Suad Nasir, the $215,000-a-year vice chancellor for equity and inclusion. This admonition would be appropriate when trying to mediate, say, between warring tribes given to slaughtering one another’s members. But the diversocrat assumption that Berkeley’s pacific students, raised from nursery school on the pablum of tolerance and diversity, are at risk of seriously violating one another’s humanity, beyond the ordinary slights of everyday social interaction, is absurd. What this seemingly gratuitous admonition really means is: “Do not violate any politically correct taboo around race, gender identity, or any other favored category in the armamentarium of narcissistic grievance.”

Equally officious is the charge to “Keep an open mind and listen with integrity,” from Joseph Greenwell, the associate vice chancellor and dean of students. The nauseatingly pop-psychological coinage of “listening with integrity” is a tip-off that student-services bureaucrats think of themselves as leading an encounter session, not an institution of higher learning. Students arrive at Berkeley shockingly ignorant of the most basic rudiments of history and Western culture. Berkeley’s adults should feel haunted by the need to cram as much knowledge as possible into their students’ empty noggins before they depart. But the only reference in the banner campaign to the academic resources lying open to those knowledge-deficient students is: “Take advantage of the American Cultures curriculum,” from a Hispanic student in the class of 2015. Needless to say, American Cultures is Berkeley’s diversity requirement: “a more inclusive curriculum that reflect[s] the diverse racial groups of the U.S.,” in the words of the official website, and that allows “collaborative social justice projects alongside community organizations.” A more appropriate admonition for an incoming student would have been: “Take some American history before you leave.”

Holmes and Cardozo invited students to the life of the mind. The diversocrats who have commandeered the American university invite students to a cultural reeducation camp where they can confess their political sins or perfect their sense of victimhood. The post-Trump nervous breakdown was a direct consequence of the diversocrats’ reign; reaction to his election will only solidify their power.

Heather Mac Donald is the Thomas W. Smith Fellow at the Manhattan Institute, a contributing editor of City Journal, and the author of The War on Cops. 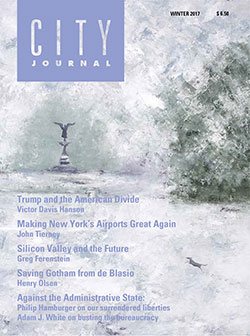