Bullets and Baseball on the Fourth of July

On Tuesday, July 4, 1950, a New York Giants baseball fan named Bernard “Barney” Doyle was sitting in the grandstands at the Polo Grounds in uptown Manhattan, waiting for a Giants–Dodgers doubleheader to begin. Doyle, a 53-year-old ship’s carpenter and freight worker from New Jersey, had attended early mass that morning to give himself plenty of time for the drive into the city. The showdown between crosstown rivals was sure to be a sellout.

Seated next to Doyle, who had earned a niche in sports history managing the early career of heavyweight boxing champ James J. “Cinderella Man” Braddock, was 13-year-old Otto Flaig, a neighbor’s son. At 30 minutes past noon, as the Dodgers took the field for batting practice, Doyle leaned forward in Seat 3 of Row C in Section 42 and started to say something to young Otto. But before he could speak, he lurched backward in his seat, stone dead.

At first, the ballpark cops suspected a heart attack. Then they noticed the hole in Doyle’s left temple. The game went on as Doyle was carried out of the stadium, though several members of the overflow crowd were said to have scuffled over his empty seat. An autopsy showed that the Giants fan from Jersey had been struck by a .45 caliber bullet. Otto Flaig, who had missed death by inches and whom the cops said complained about missing the doubleheader, did not hear any shots. Neither did anyone else in Section 42. The bullet, detectives quickly realized, must have been fired from Coogan’s Bluff, the rocky escarpment that rose above the western end of the Polo Grounds.

Sometimes called “Tightwad Hill” because thrifty Giants fans atop the precipice preferred a partial view of the ballfield to the price of a ticket, Coogan’s Bluff was home to several apartment buildings on Edgecombe Avenue, which runs along the ridgeline. For two days, detectives scoured the neighborhood and the apartments before a tip led them to a 14-year-old boy named Robert Peebles. They found various weapons in the apartment where Peebles lived, and he confessed to firing the fatal shot. Six months earlier, he told the police, he had found the .45 in Central Park, with one bullet remaining in the magazine. He had been waiting to celebrate the Fourth with a bang. After climbing to the roof of 515 Edgecombe Avenue, he looked down on 49,000 fans jam-packed into the Polo Grounds, aimed the pistol into the air, and pulled the trigger. A few seconds later, 1,200 feet away, Barney Doyle fell dead. Peebles said that when he heard what happened, he threw the gun away. It was never found.

The NYPD considered the case closed, but others had doubts. Speculation abounded that an adult friend or family member had fired the deadly shot and had talked Peebles into accepting the blame. As a juvenile offender, the boy served just two years in reform school.

On July 5, the Daily News ran a front-page photo of Doyle, slumped dead in Seat 3. Several police officers can be seen around him, but most of the fans in Section 42 seem to have their eyes on the game. The Giants and Dodgers split the holiday doubleheader, and the peculiar incident faded from the press. There were other things to worry about: bus and subway fares had just gone from seven to ten cents, and in Washington, emergency meetings were under way—North Korean forces were racing south, brushing American troops aside. Congress was getting ready to reinstate the draft.

The Fourth of July bullet from above was quickly forgotten, except by Giants owner Horace Stoneham, who is said to have brooded for years about Doyle’s strange demise and the run-down buildings on Coogan’s Bluff. Some Giants’ fans still wonder if Doyle’s death played a role in persuading Stoneham to move his team to San Francisco in 1957, but that seems unlikely. The Doyle incident was a once-in-a-lifetime kind of thing.

And yet, on the evening of Thursday, July 4, 1985—35 years to the day after Doyle’s death, and one mile east of the housing project that replaced the Polo Grounds in 1968—a pregnant 34-year-old woman from Bronxville, Joanne Barrett, walked into Yankee Stadium with her husband Kevin and their two sons to watch the Yanks play the Minnesota Twins, before a somewhat rowdy holiday crowd of 35,000. The Barretts took their seats in Section 7, Row D, Box 613.

In the sixth inning, with the Yankees leading 3-2, Mrs. Barrett heard a loud “pop” and felt a sudden jolt of pain. A hole in her right hand left no doubt that she had been shot. The game continued undisturbed as stadium police fanned out through Section 7, looking for both the shooter and the bullet. They never found the former, but the latter—a copper-colored slug that broke a bone in her hand—turned up three days later in Mrs. Barrett’s handbag. 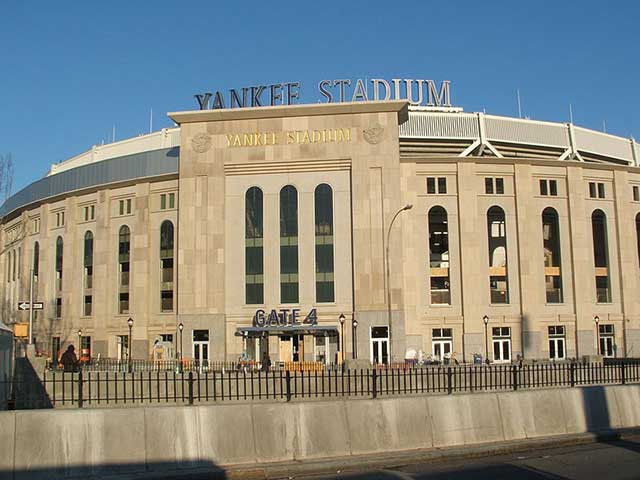 It’s now been 33 years since bullets and baseball last rendezvoused in New York on the Fourth of July. It’s entirely possible that these grim events were just twice-in-a-lifetime longshots.

Today, Barney Doyle rests in peace in Holy Cross Cemetery in Bergen County, New Jersey. Otto Flaig, his young companion who had the good fortune to be in Seat 4 on that fateful day at the Polo Grounds, also lies at rest in New Jersey. Flaig put that traumatic day behind him and went on to a successful career in law enforcement, becoming the police chief in Teterboro. He often shared his close escape at Coogan’s Bluff with the young people of his town, urging them to be good citizens and never play with guns. He died at 55 in 1992.

By all accounts, Joanne Barrett made a complete recovery. The Yanks, however, may not have fared as well. She sued the Bronx Bombers for $50 million ($8.1 million compensatory, $41.9 million punitive). It’s not known how the legal proceedings turned out, but one can hope that goodwill prevailed all around.

Perhaps Mrs. Barrett’s pain was eased somewhat by the concerned call she received from Yankees owner George Steinbrenner. The Boss, as he came to be known, was the Horace Stoneham of his day, and he worked hard to rebuild his famous franchise. In 1975, he renovated the old Yankee Stadium, squeezing a few more useful years out of “the House that Ruth Built.” Today the old stadium is gone, replaced by athletic fields and a new stadium next door, both of which stand in the shadow of the high escarpment that carries the Grand Concourse northward through the Bronx. The bullet that hit Joanne Barrett’s hand during that holiday game in 1985 must have been a double downer to the Yankee boss. George Steinbrenner was born, you see, on the Fourth of July.