On Election Day, Californians voted on Proposition 30, an initiative that would save the state’s education system (according to the governor, state legislators, and teachers’ unions) by giving it an influx of at least $6 billion. If the proposition failed at the polls, its proponents warned, various school services would have to be cut, and schools would have to shave up to 15 days from the school year. Nonsense, said the proposition’s detractors; the state could find the money elsewhere if the initiative didn’t pass. And if it did pass, they added, the new money would probably never see the inside of a classroom; instead, it would be used to shore up (temporarily) the state’s hugely underfunded teacher-retirement system. Prop. 30 did pass. As a result, Californians now have the highest state sales tax in the country—7.5 percent, up from 7.25 percent. And the state’s top marginal income-tax rate has leaped from 10.3 percent to a nation-leading 13.3 percent.

Even if the extra money reaches the classroom, it’s not clear that it will do any good. The tired mantra from teachers’ unions, school boards, and education bureaucrats is that money spent on education is an “investment” that will pay off in greater student achievement. As the data show, that claim is fallacious. The Cato Institute’s Andrew Coulson notes that over the last 40 years, the country’s education spending has almost tripled, while its scores on the National Assessment of Educational Progress (NAEP) have remained flat.

In California, education spending has doubled over the last 40 years. The state’s teachers are the fourth-highest-paid in the country, with an average salary of $67,871, not counting their generous pensions. What do we have to show for it? On the most recent NAEP, California’s fourth-graders ranked 45th in the nation in mathematics; in science, they ranked second to last, topping only Mississippi. Over the same 40-year span, California’s average SAT scores have dropped about 5 percent.

One of Prop. 30’s vocal critics is Gloria Romero, a former state senator and now the California director of Democrats for Education Reform. The proposition is “a bandage on the current system,” she told the San Jose Mercury News. “We got no reform for the investment.” The same article quoted Stanford professor Eric Hanushek, an education expert, who worries that, with more tax revenue now assured, California will do little to address underlying education problems: “I’m concerned now that we’ve gotten past the fiscal cliff, we’re going back to business as usual.”

California will see substantive change only when the public school system is truly reformed. That means doing away with seniority and tenure for teachers (Romero’s recommendation) and letting schools fire their worst teachers (Hanushek’s). It also means giving parents choices about where to send their children to school. Throwing more money at a failing system will produce only a more expensive failing system in a rapidly failing state. 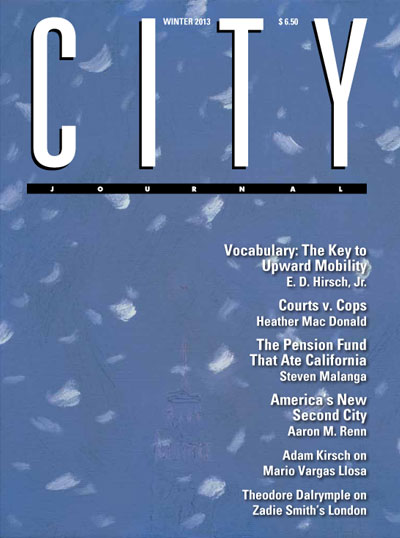 Larry Sand California’s ethnic-studies mandate for K‒12ers is dead for now, but cultural Marxism is flourishing.
More on