Following President Trump’s declaration on Twitter Wednesday that transgender people would not be permitted to serve in the armed forces, protesters converged on Times Square. Assembling in front of the Armed Services Recruiting Station, several hundred people cheered as local elected officials and LGBT activists denounced both the decision and President Trump generally.

Most of the crowd held small printed signs reading, “Resist”; others waved the familiar “NO!” signs from the Revolutionary Communist Party-backed Refuse Fascism movement. A few handmade signs stood out in the relatively compact crowd, in particular one that read, in black against a red background, 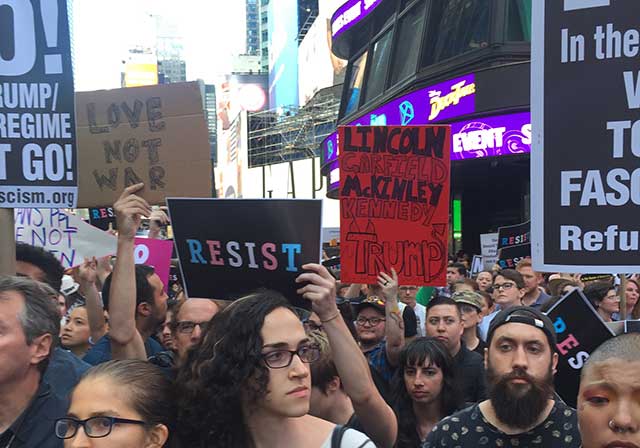 The first four names on this list, of course, are the presidents murdered in office, in chronological order; the last embodies the seeming wish of many on the American Left that someone put him on it for real. As seen in the picture accompanying this article, Trump’s name is embellished with horns and a tail, and flames indicate that the president is roasting in hell: the protester left little room for interpretation.

The sign was held aloft for the duration of the event, in full view of the crowd, the media, the NYPD, and at least a dozen elected officials, but garnered no comment or acknowledgement. Perhaps historical literacy is so low that the sign’s meaning eluded most people, but it’s more likely that the pitch of outrage is keyed so high in leftist political rhetoric that the message on the sign was basically unremarkable—uncontroversial, even.

Consider what now passes as respectable dissenting opinion. New York City comptroller Scott Stringer issued a press release this week announcing that “Republicans just made the U.S. Senate a death panel,” because they voted to permit debate on changing Obamacare, which is in a state of critical failure. The evening before the president’s announcement, Melissa Mark-Viverito, speaker of the city council, tweeted, in response to nothing in particular, “Just sickened by this maniacal, self-absorbed, narcissistic, sadist, misogynistic, so-called President. Your days are numbered, FOOL.” Given Mark-Viverito’s open support and affection for convicted political terrorists like Oscar Lopez Rivera and Isabel Rosado Morales, it is hard to read “your days are numbered” as only figurative.

Public advocate Tish James spoke at the rally, and, in view of the sign calling for his death, led chants in favor of resistance to Trump. James first ascended to office in 2003, after her predecessor, Council Member James E. Davis, was shot to death by a rival at City Hall. One would have hoped that James would thus be attuned to ugly, violent political discourse, but she chose to ignore its presence.

Council Member Corey Johnson, speaking at Wednesday’s protest, said that Trump’s announcement “is not just an attack on trans service members; this is an attack on the entire United State military by this president.”Another city legislator, Jumaane Williams, tweeted a picture of the rally, including the sign calling for Trump’s assassination, with the inscrutable comment, “At 42nd street rally against @realDonaldTrump #transmilitaryban. You cannot hate nearly. #istandforhumandignity”—presumably meaning that there is no limit to the amount of hate that one should feel toward the president.

When asked about the hateful message of the protester’s poster, Williams responded, “I don’t approve of that sign.” Corey Johnson also expressed concern when asked about it, saying, “I do not support any political violence, against anyone.” Such disavowals are welcome, of course, despite their perfunctory, after-the-fact nature. But the question remains why hundreds of protesters, and at least a few dozen politicians, political aides, and advocates, did not take a moment to disavow it to the person in Times Square openly calling for President Trump’s violent death.

A Rare Chance of Bipartisanship

Christos A. Makridis Republicans and Democrats should come together to reauthorize the Violence Against Women Act.
eye on the news

A Culture of Corruption