“Social responsibility” is an obligatory invocation for self-styled progressives in any field, so it’s tempting to roll one’s eyes at architect James Stewart Polshek’s early and repeated use of the term in his new autobiography-cum-monograph, Build, Memory. He is, after all, essentially a Democratic house architect, designer of the William J. Clinton Presidential Center and Park. But architecture is an intensely social art, and Polshek’s keen attention to human concerns—in both the selection and execution of projects—actually justifies his use of the phrase. 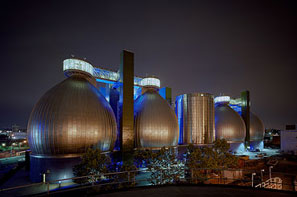 A contemporary of Richard Meier and Frank Gehry and boasting a comparably sized body of work, the 84-year-old Polshek is rarely mentioned in the same breath as these global “starchitects.” Indeed, his approach to architecture is—in his own words—a rejection of “the all-encompassing maestro designer.” Throughout his career, Polshek steered clear of both the harsh certainties of modernism and the frivolity of postmodernism, developing his own distinct style. Unlike his high-profile peers, Polshek was willing to adapt to the needs of an unusual range of clients. And if his work never quite hit the aesthetic highs of some of his contemporaries, it also avoided their tendency to produce franchise-like variations on familiar themes.

Most of the 16 works in this volume are public works, though Polshek’s notion of what constitutes a public work is expansive. The William J. Clinton Presidential Library, the Rose Planetarium at the Museum of Natural History, and the National Museum of American Jewish History are profiled here, as one would expect, but so are a wastewater treatment plant, an Indiana mental health center, an embassy in Oman, and several projects that principally involved renovations of existing structures—the Brooklyn Museum, Carnegie Hall, and the Santa Fe Opera, among others. Entries are accompanied by numerous photographs, both of the structures and their inspirations, and accessible accounts of Polshek’s thinking about each.

The presence of renovations and alterations on the list is no accident. Most architects wouldn’t want to share credit with John Russell Pope in their own monograph, but Polshek is happy to do so. As architectural historian Helen Searing has noted, “In standing back—renovating existing buildings where he must subordinate his own personality to that of previous architects, and designing additions, where he must tackle the stressful task of welding old and new—Polshek stands out in his profession.” Each renovation presented the architect with an opportunity to rationalize structures that had grown unwieldy through later additions, incomplete visions, or flawed prior makeovers. Unusual among architects for a previous stint in medical school (placing him in the small physician-builder company of Imhotep and Claude Perrault, the designer of Perrault’s Colonnade at the Louvre), Polshek turns repeatedly to medical metaphors, describing his renovation efforts as “an act of healing.” His approaches are diverse: restoring original spaces where possible, grafting modern additions where needed. He crafted an elegant and modern Zankel Hall out of the Carnegie Hall basement and replaced the Brooklyn Museum’s entrance stairway with a curved, angled pavilion designed to ease entry while reinforcing the geometry of the museum’s dome. Polshek’s Rose Planetarium at the Museum of Natural History—with its planetary orb encased in a glass cube—was also an act of mediation. While he replaced the previous Hayden Planetarium, he took substantial care to locate the new facility within the footprint of the original.

A similarly forthright style animates Polshek’s industrial commissions, which reflect his belief that even the most unappealing of public necessities offer an opportunity for quality design. The Newtown Creek Wastewater Treatment Plant—those curious “eggs” visible from the Long Island Expressway—took a form as playful as its function is malodorous, with a color scheme chosen to emphasize the difference in the functional utility of each structure. Glistening pearl-onion domes interlace with artstore-fresh orange and green blocks in what Polshek calls “something of a Lego plant for grown-ups.” The huge New York Times printing facility along the Whitestone Expressway is a similarly thoughtful arrangement of a routine space. Here again, Polshek aimed for a design that reflects the building’s function. He arranged the complex in a series of blocks tracking the linear process from paper storage to delivery docks, with cutouts from these blocks offering a view of the printing presses within.

Polshek’s structure for the Clinton Library, a glass cantilever, was designed to look like a bridge (though a skeptic would note that it leads nowhere). The National Archive insisted that the building be located as far away as possible from an Arkansas River flood plain. Polshek also wished to avoid walling off the museum from views of Little Rock. To satisfy these competing goals, Polshek put the parts of the building containing Clinton’s archived papers farthest from the river and the remainder of the museum on a cantilever permitting clear views along the river. He addressed concerns about a harsh Western sun by constructing a “porch”—two separate glass walls to mute light and save energy. The result, by the admittedly low standards of presidential libraries, is dynamic and appealing. Polshek’s other institutional architecture displays an easy grace. He is especially adept at organizing interior space. His atriums in the Scandinavia House, National Museum of American Jewish History, and Newseum inject light into interior functions and chambers.

Polshek’s enduring enthusiasm for his works is infectious, even in cases where they don’t seem obvious successes. If this is “social responsibility,” then let’s have more of it.

Anthony Paletta Despite some puzzling choices, Philadelphia’s Museum of the American Revolution presents a compelling picture of our national origins.
books and culture

Anthony Paletta A new book collects the unrealized dreams of an architect known as an anti-urbanist.
More on