An Amalgam of the Magnificent and Quirky

Along Chambers Street in lower Manhattan, just north of City Hall, stands the Tweed Courthouse. When it first opened in the early 1880s, known as the New York County Courthouse, it was considered a monument to public corruption. To build it, William “Boss” Tweed and his Tammany Hall cronies looted millions from the city treasury via an extensive kickback scheme.

Today, it has another distinction: it is one of New York’s great public buildings not open to the public. The city’s Design Commission used to offer walking tours for Tweed similar to the ones that it currently conducts at City Hall, but the program has since been discontinued. The de Blasio administration would do a public service by relaunching these tours.

The Tweed Courthouse has been unbeloved throughout most of its 137-year history, leading to misguided modifications and resulting deterioration. In the early twentieth century, the city covered up architect Leopold Eidlitz’s polychrome brickwork throughout the five-story main rotunda with gray paint. In the 1940s, a WPA project widened Chambers Street to make another lane for traffic headed to the Brooklyn Bridge, necessitating the removal of Tweed’s front staircase, an essential element of the original design. And extensive cultural vandalism-by-neglect took its toll on the building’s tiled floors, Corinthian columns, and marble cornice. Discussions about razing the building continued through mayor Abe Beame’s administration in the 1970s. Ironically, it was the city’s decrepit finances that spared the building from demolition. 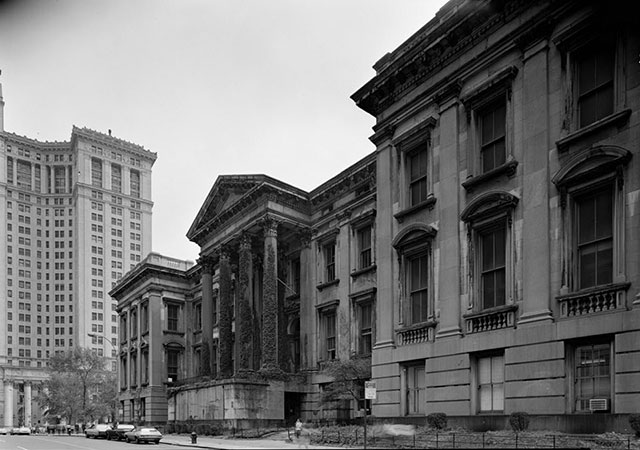 New York tolerated the building’s deterioration because of its notoriety. In addition to its connection with the Tweed Ring’s misdeeds, the Tweed Courthouse was the setting for many chapters from Tammany’s outrageous history. In the 1870s, Boss Tweed himself was put on trial while the building was only half-finished. It was used by the Lexow Committee, convened in the 1890s to investigate police corruption and Tammany Hall. George Washington Plunkitt (1842-1924) was a longtime Tammany functionary whose philosophy—including such gems as “I seen my opportunities, and I took ‘em”— was related in the most famous book ever written about urban machine politics: Plunkitt of Tammany Hall. Plunkitt’s “office” was a bootblack stand in the Tweed Courthouse.

The courthouse’s aesthetic reputation has long suffered from its association with public corruption. Writing in the 1920s, Tammany historian Morris Robert Werner called it “a gloomy, meandering mess of unattractive rooms designed in the worst taste and executed with ugly materials.” In Tigers of Tammany (1967), Alfred Connable and Edward Silberfarb dismissed it as a “grim, gray building” that was “not beautiful nor does it appear to be expensive.”

More recent generations of New Yorkers have given the building another look. Both the exterior and interior were landmarked in the 1980s. Rudolph Giuliani’s administration directed a $90 million restoration. Among other improvements, the Chambers Street staircase was reinstalled and Eidlitz’s brickwork was uncovered, giving those entering, for the first time in generations, the full burst of color that Eidlitz had intended would greet them. (The effect is enhanced by the fact that, at first, you can only glimpse the central rotunda. It pulls you in, suggesting its virtues before revealing them.)

Tweed’s style eludes categorization. The Landmarks Preservation Commission describes it as “the product . . . of two of the most disparate 19th century architectural movements, the mid-century commercial Italianate, and the later highly theoretical Victorian Romanesque.” The “theoretical” style was that of Eidlitz, a native of Prague who worked with Henry Hobson Richardson on the State Capitol in Albany. Eidlitz took over the courthouse’s design after the death of John Kellum, Tweed’s first architect, when construction was still years away from completion—an obvious hazard when a project takes 20 years, as Tweed did. (Twenty-first century New York did not invent interminable mega-projects.)

Eidlitz had connections to the reformers who brought down Boss Tweed, which helped him secure the commission. His chief contributions to the building—a south wing facing City Hall and the rotunda—were designed in what we might call a “deliberately non-contextual” manner. He set his “Victorian Romanesque” work against Kellum’s, as if he were a twenty-first century architect commissioned to install a glass addition onto a masonry-clad museum built 100 years before. The south wing not only juts out from the rest of building; its windows also have entirely different features from, and don’t square with, the windows in the back of the north section’s east and west wings. Kellum adorned the interior with extensive cast-iron ornamentation; Eidliz thought it looked cheap. His brickwork may seem ostentatious, but he saw in it a dignified simplicity because he used it in parts of the building essential to its structure, such as the arches in the rotunda. He felt that his ornamentation had an “honesty” that Kellum’s lacked. Eidlitz biographer Kathryn Holliday sums up his approach as “an essay in brick and stone that attempts to shame the tawdriness of the adjacent cast iron.” 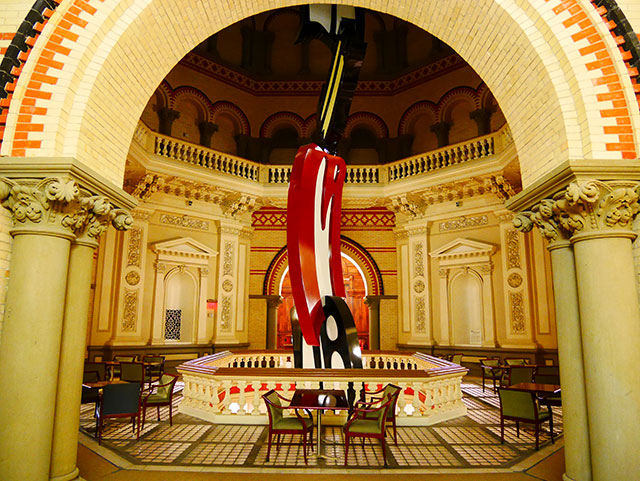 Eidlitz’s alterations made Tweed Courthouse a Frankenstein-like building at war with itself. In 2003, the city installed a massive Roy Lichenstein sculpture (“Element E”) that reaches up through the center of the rotunda. It’s hard to decide whether this does or doesn’t fit in, when so much of the rest of the building is so ungepatchket. Tweed’s architectural quality remains difficult to assess.

Hence, the value of a walking-tour program. Learning about the Tweed Courthouse’s amalgam of the magnificent and quirky is not enough. You need to see it. Walking tours are an essential part of New York’s cultural life, which the de Blasio supposedly wants to enhance. Failing to include a Tweed walking tour in its “cultural plan” was a missed opportunity for the administration, but one which it could reverse during the upcoming budget cycle. The cost would be minimal—somewhere in the low five figures—just enough to cover expenses relating to promoting the tours and training docents to lead them. The docents themselves could be unpaid volunteers, as are those leading the City Hall tours.

The larger lesson of this work of architecture—one that it shares with the city’s decades-long crime decline, rise in student test scores, and repopulation of many neighborhoods given up for dead—is that everything’s not always downhill. Sometimes, the mistakes of the past can be reversed through the rediscovery of the wisdom of the more-distant past. What better lesson for our times, when so many on the left and the right assume that the natural drift of human affairs is toward decline?

Stephen Eide is a senior fellow at the Manhattan Institute. 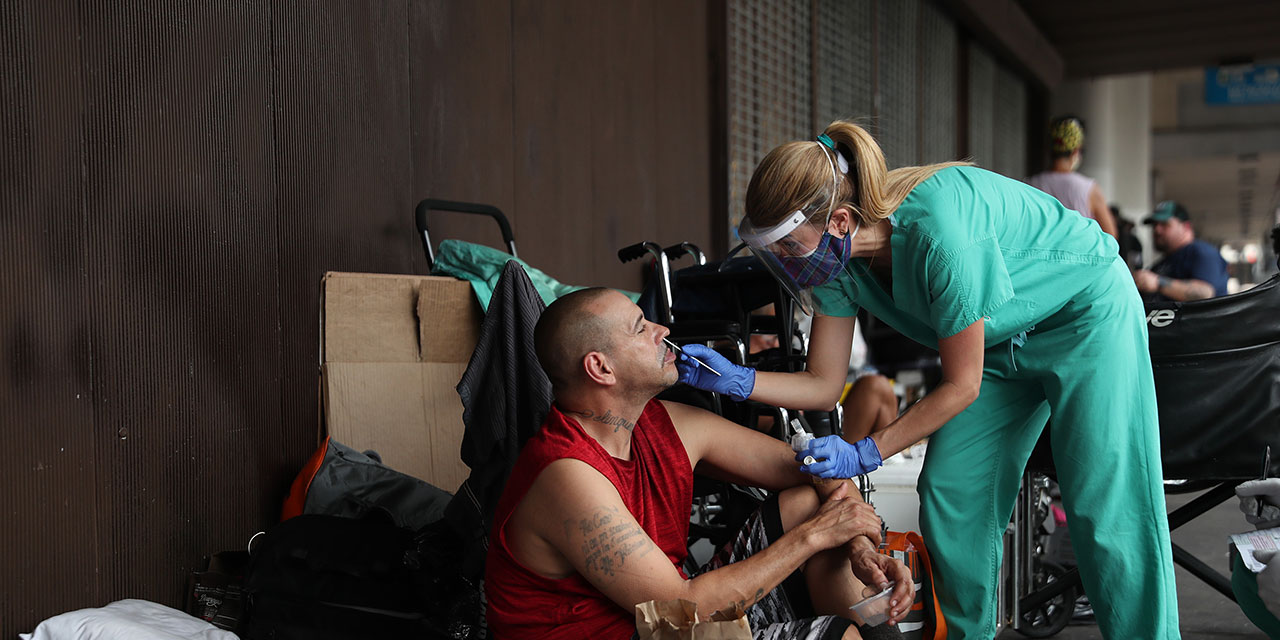 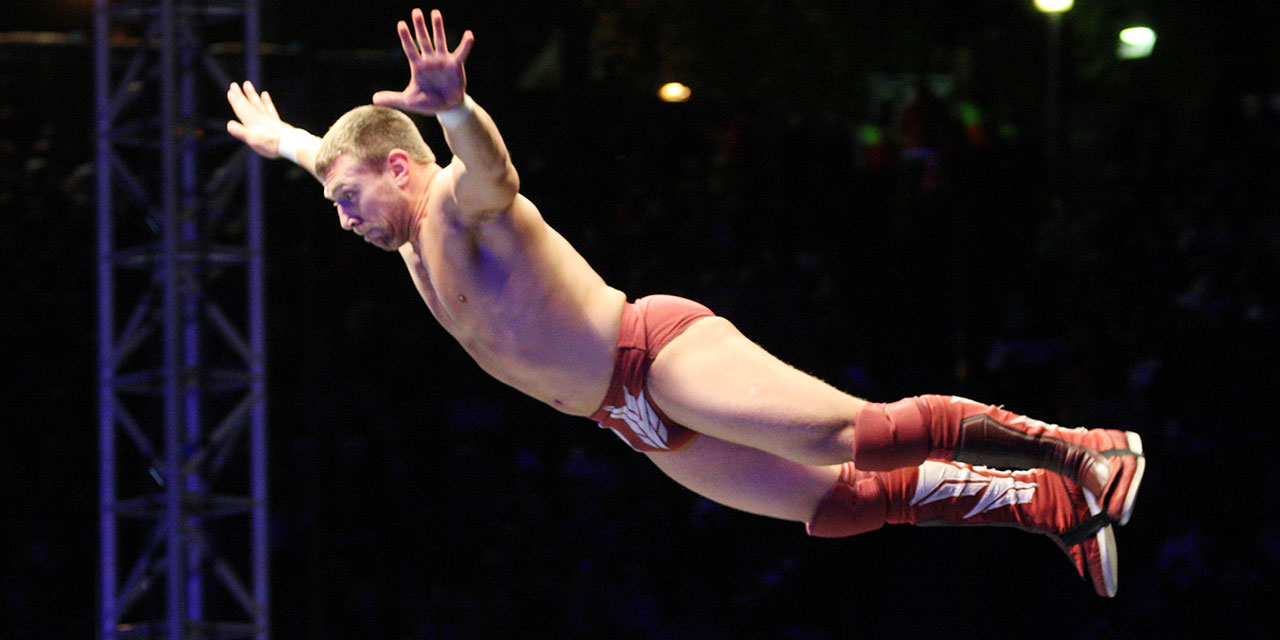