Alexis de Tocqueville is celebrated for his classic study of American civilization at the beginning of the nineteenth century. The author of Democracy in America was only 25 when he visited the United States, but he had a wide-ranging intellect, a keen sense of observation, and a journalist’s knack for eliciting the opinion of others. Consequently, one can pick almost any subject-slavery, religion, education-and find that he had something interesting to say about it. It is hardly surprising, then, to discover that Tocqueville, the political scientist and comparative sociologist, was also an urban critic.

Tocqueville and his friend and traveling companion, Gustave de Beaumont, disembarked on May 9, 1831, in Newport, Rhode Island. Tocqueville found the harbor town “very attractive” (it still is), and wrote to his mother that Newport was “distinguished by a cleanness that is a pleasure to see and that we have no conception of in France.” (Today it is Paris that surprises Americans by its tidiness.) It is Tocqueville’s letters and the 14 notebooks that he kept during his travels, more than his famous book, that are the best source for his opinions about American cities and towns.

In general, he was impressed by small towns. While traveling through Massachusetts, he recorded: “Almost all the houses are charming (especially in the villages), and there prevails a height of cleanliness which is something astonishing.” It was not only the architecture that impressed him. Tocqueville considered the New England town an exemplary democratic institution, since it involved a large number of citizens in managing their own affairs; he called the town “the ultimate individual [emphasis in original] in the American system.” He was also astute enough to observe that the political independence of these small communities lay in what he called their municipal spirit. “Americans love their towns,” he wrote, “for much the same reasons that highlanders love their mountains. In both cases the native land has emphatic and peculiar features; it has more pronounced physiognomy than is found elsewhere.” Here, more than a century before Capra’s It’s a Wonderful Life, is clear evidence of the widely held American affection for the small town.

Most New England towns remained small-they rarely had more than two thousand residents, which undoubtedly facilitated their self-government. But such small settlements were no longer typical of the United States. A very different sort of town was coming into being in the American interior-the boom town. Tocqueville passed through a number of such places: Rochester, whose population had increased from 150 to 15,000 in only a decade; Memphis, only four years old but already a busy cotton port; and Louisville, where a local merchant proudly told him that the town had grown from 3,000 inhabitants to 13,000 in only seven years. But the fastest-growing inland river port was Cincinnati, where Tocqueville and Beaumont spent three days in December 1831.

When Tocqueville arrived, Cincinnati was only 43 years old, but thanks to the opening up of the Ohio to steamboat traffic in 1816, it was a busy city of about thirty thousand people. “Cincinnati presents an odd spectacle,” he recorded in his notebook. “A town which seems to want to get built too quickly to have things done in order. Large buildings, huts, streets blocked by rubble, houses under construction; no names to the streets, no numbers on the houses, no external luxury, but a picture of industry and work that strikes one at every step.” Tocqueville’s reservations are understandable; the town had little in the way of civic refinement. A regular grid of intersecting streets divided the land into square blocks and demonstrated no regard for topography or for the great river. It is not surprising that the founders of the city wasted no effort on niceties of urban design; they were property developers and, like most nineteenth-century American towns, Cincinnati was founded strictly as a real-estate venture.

Tocqueville and Beaumont spent slightly less than nine months in North America (they also went to Canada), and they visited all the major eastern seaboard cities-New York, Philadelphia, Boston, Baltimore, Montreal-although they missed those two attractive southern colonial towns, Charleston and Savannah. Montreal reminded Tocqueville of an ugly French provincial town, but he liked Boston-”a pretty town in a picturesque site on several hills in the middle of the waters.” Boston, unlike Cincinnati, had created a civic waterfront (the only American city to do so), shortly before Tocqueville’s visit-Quincy Market, which opened in 1825. The Massachusetts city was the cultural center of the United States; it was, for example, the heart of the Greek Revival that was sweeping the nation. The young French aristocrat (Tocqueville was technically a baron, although he refused to use the title) appreciated Boston society, which he compared favorably to the upper classes in Europe. “One feels one has escaped from those commercial habits and that money-conscious spirit which makes New York society so vulgar,” he wrote in a letter.

Tocqueville spent a total of two months in New York, since it was the base from which he and Beaumont set out on their several trips, but he never warmed to the city. In a letter to his friend, Ernest de Chabrol, he described the island site of New York as “admirable,” but complained about the lack of noteworthy public monuments and added that “it does not resemble in the least our principal cities in Europe.” “To a Frenchman the aspect of the city is bizarre and not very agreeable,” he wrote to his mother. “One sees neither dome, nor bell tower, nor great edifice, with the result that one has the constant impression of being in a suburb. In its center the city is built of brick, which gives it a most monotonous appearance. The houses have neither cornices, nor balustrades, nor portes cochères.” The only good thing he found to say about New York was that although the streets were badly paved, all had sidewalks.

Was it really that dismal? Probably. Large sections of New York had been destroyed during the British occupation by two disastrous fires, the population shrank to as few as ten thousand people immediately after the War of Independence, and the economy did not revive until about 1790. So what Tocqueville saw was a newly growing, newly built city; that, and the lack of an architectural heritage, would have given it a makeshift air. The monotony that he comments on was also the result of the Commissioner’s Plan of 1811, which divided almost the entire island of Manhattan north of Washington Square into a regular gridiron consisting of 155 cross-streets at two-hundred-foot intervals, crossed by a dozen north-south avenues more than seven miles long. The blocks were divided into 25-by-100-foot plots. It was a real estate agent’s dream, but it was not much more than that.

In 1811, when New York had fewer than 50,000 people, laying out such a vast gridiron must have appeared hopelessly optimistic. Even twenty years later, when Tocqueville stayed there, though the city had mushroomed to over 200,000, less than a third of the grid was filled in. Two hundred thousand does not sound like a major city today-it is smaller than Anchorage, Alaska-but in the beginning of the nineteenth century it signified an important city the size of Amsterdam, Vienna, or Berlin.

One should not imagine New York as a smaller, more livable version of today’s metropolitan behemoth. This was a premodern city that lacked most of the urban technologies we take for granted. There were no underground sewers to carry off household wastewater, for example. The fecal matter of 200,000 people was either collected by night-soil scavengers and carted to the countryside to be used as fertilizer, or deposited into pits and cesspools; kitchen slops were dumped into the street. Since there was no municipal water supply, backyard wells were easily contaminated. It is little wonder that the first cholera epidemic in the United States broke out in New York, in 1832. As Tocqueville noted, most streets were unpaved. The mud was mixed with horse manure and domestic refuse was scattered everywhere, for there was no garbage collection-which is why modern Manhattan streets are typically 6 to 17 feet higher than their original levels.

Altogether, urban life was uncomfortable and unhealthy-and dangerous. What seems to have struck Tocqueville most about the largest cities like New York and Philadelphia was the presence of a turbulent urban lower class, which he described as consisting of freed black slaves (“condemned by law and opinion to a hereditary state of degradation and wretchedness”), and poor immigrants, whom he considered to be motivated by self-interest rather than by citizenship. The urban rabble was a common feature of European cities and would hardly have surprised Tocqueville, but he foresaw (more or less correctly) that in a democracy, the large size of American cities and the volatile nature of the urban underclass (although he did not call it that) would eventually threaten republican institutions. He also predicted that the government would be obliged to create an armed force to suppress the excesses of the mob, which had already instigated serious riots in both New York and Philadelphia. He was right about that, too: in 1833 Philadelphia formed its first regular daytime police force, and 11 years later, New York followed suit.

It is understandable that a native Parisian was not impressed by unruly, mercenary New York. There was another American city, however, that might have elicited a more favorable opinion-Washington. After all, it was planned by Tocqueville’s countryman, Pierre Charles L’Enfant, and was intended to be a leading example of civic beauty. L’Enfant was an architect and engineer, and his plan incorporated such Baroque-inspired devices as broad diagonal avenues, civic squares, and monumental vistas. It was a visionary scheme that dwarfed anything being built in Europe, including even Peter the Great’s St. Petersburg, then taking shape on the Neva.

When Tocqueville and Beaumont visited Washington-they spent about two weeks meeting public officials and consulting government archives-the city was forty years old, but lacking a good port and commerce, it was growing slowly and held only about twenty thousand people. Since there was no indication in L’Enfant’s plan of how the city might expand in phases, construction was taking place in a scattershot fashion, with groups of houses here and there; it gave the impression, according to Tocqueville, of a town composed of five or six villages. Compared to the carefully drafted plans made first by L’Enfant and later by the surveyor Andrew Ellicott, the reality was almost comical. The mile-long mall was used as a cow pasture; the ronds-points scattered throughout the city, which were to commemorate the states of the Union, were planted with vegetables. The monumental avenues (130 to 160 feet wide) that L’Enfant had created to link important sites were there all right, but they were flanked not by buildings but by virgin forest or raw earth; the White House and the Capitol stood in forlorn splendor. There is disbelief in Tocqueville’s voice when he notes that “they have already rooted up trees for ten miles around, lest they should get in the way of the future citizens of this imagined capital.” In fact, the imagined capital would be splendidly realized (thanks to the 1901 McMillan Commission), and the future citizens of Washington would spread out far beyond ten miles around, but that was in a future that even the prescient Frenchman could not foresee. 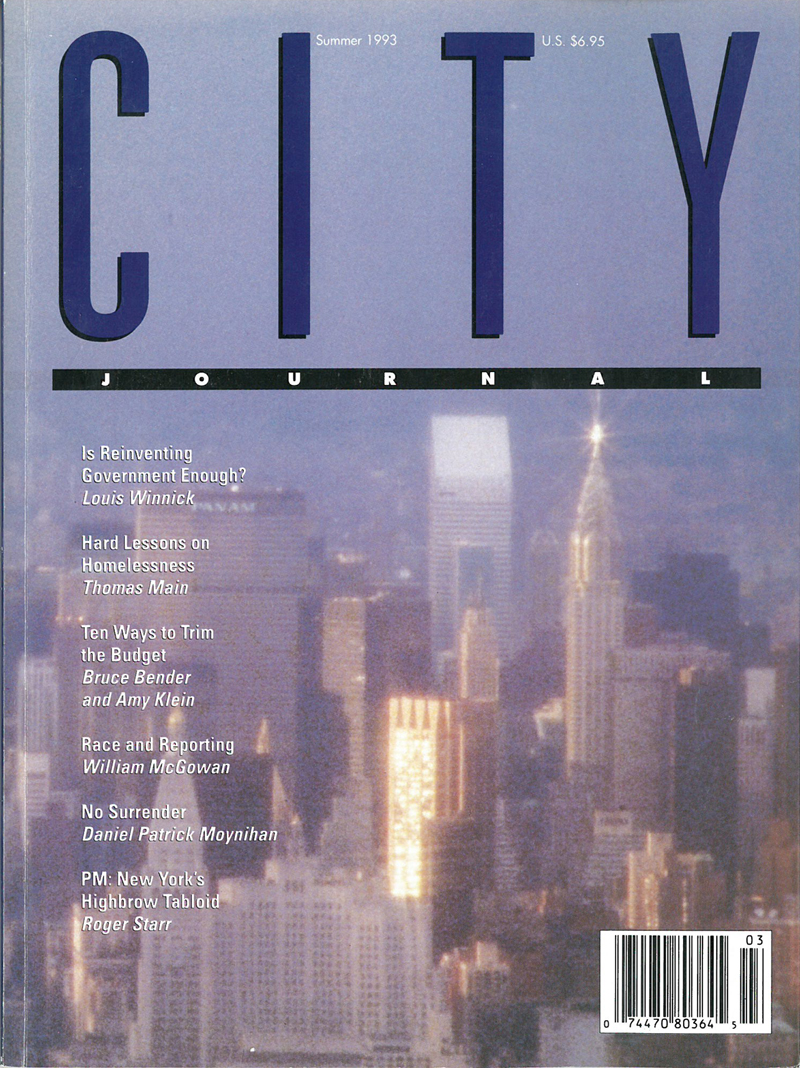