From an architectural standpoint, Scranton is one of Pennsylvania’s most beautiful cities. At the intersection of downtown’s North Washington Avenue and Vine Street, one sees a sublime panorama of Gothic, Romanesque, art deco, and neoclassical design. On Vine, the French Gothic Albright Memorial Library (1893), modeled after the Cluny Museum in Paris, stands alongside the temple-like children’s library (1915), once a Christian Scientist church. Across the street, Lackawanna College’s Angeli Hall (1896)—previously Scranton’s Central High School—commands the block. Southward, beyond the intersection, is Scranton’s Cultural Center at the Masonic Temple (1930), a stunning edifice designed by Raymond Hood, the architect behind Manhattan’s Rockefeller Center. Facing it, on Washington, is the city’s school district administration building (1910), a Victorian Gothic masterpiece. Long ago, these structures captivated one Scranton native, Jane Jacobs, whose early observations of the central city’s “sidewalk ballet” helped make her one of America’s most revered urbanists.

In her new book, Jane Jacobs’s First City, Glenna Lang reviews how, during the 1920s and 1930s, the northeastern Pennsylvania city nurtured Jacobs’s perspective on urban neighborhoods. Lang presents a charming, well-written account of Jacobs’s childhood, filled with exhaustive historical research, poignant interviews, and evocative descriptions of Scranton. As Lang shows, it was Scranton, not Greenwich Village, that inspired Jacobs’s influential Death and Life of Great American Cities, released 50 years ago this year. 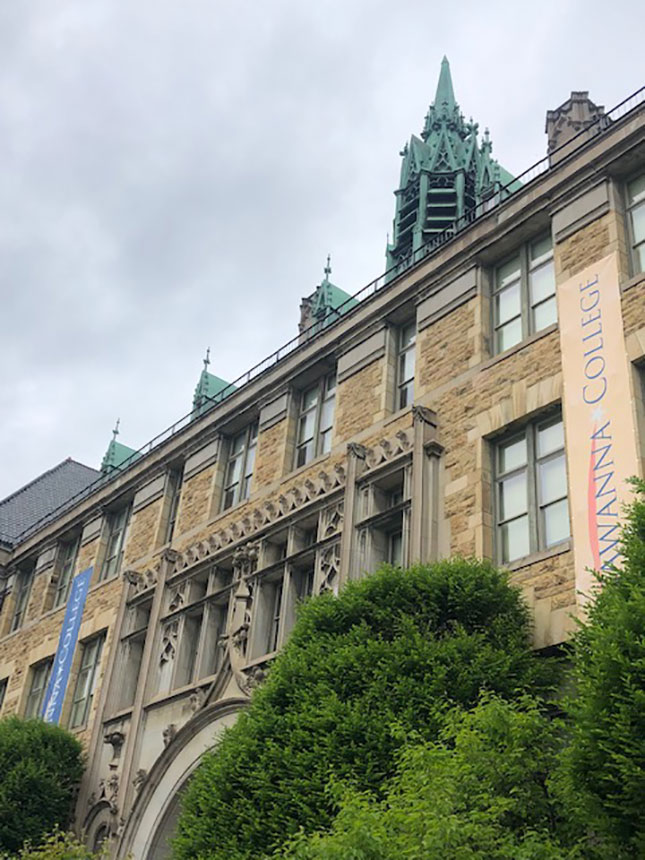 Jacobs, née Butzner, was born in 1916 amid what she considered Scranton’s halcyon years. A few years before, Jacobs’s Virginia-born father, a physician and civic leader, and her mother, who was related to Hazleton’s powerful coal-operating families, had settled in Scranton. During this period, as Jacobs noted in her 1970 book, The Economy of Cities, Scranton flourished because of growing exports, such as textiles, along with the production of “locally many humdrum former imports,” including beer, tombstones, and potato chips. At one time, Scranton was a top manufacturer of rails and steel, but more than anything, it was anthracite coal—found in the surrounding Lackawanna Valley’s “patch” towns or beneath an increasingly urban grid—that turned the city into an industrial and commercial empire.

Scranton’s coal production peaked during World War I, when Jacobs was an infant. It was a lively city with countless immigrants, boasting by 1920 a population of nearly 138,000. Lang quotes Scranton-born John Oliver La Gorce, once president of the National Geographic Society, who in 1919 observed, “Bees in a hive were never busier than the hustling, bustling go-ahead folk of the Electric City.” From an early age, though, a few Scrantonians understood the perils of resource-dependent growth. In his 1885 book, History of the Lackawanna Valley, Horace Hollister quotes William Walker Scranton—a member of the city’s founding family—who presciently warned then “that a great many of us here are going to live to see the time when the growth of this town, so far as it depends upon mining, is not going to increase.” Writes Lang: “Jane would have endorsed this admonition.”

Jacobs spent her earliest years in Green Ridge, the city’s premier residential neighborhood. In the late nineteenth century, members of Scranton’s elite had developed this upscale new section, which, in 1886, became connected to the downtown, thanks to America’s first electric streetcar system. Over time, Lang writes, “Green Ridge . . . came to be through a myriad of small decisions by many individuals looking to benefit from Scranton’s boom economy. No overarching plans or the concept of zoning restricted them.” In the 1910s, when the Butzners lived on the aptly named Electric Street, Green Ridge had become an ideal mixed-use neighborhood, one far different from later suburbs, which Jacobs viewed as lacking “the room for great differences among neighbors.” As Lang puts it, “Scranton’s finest suburb . . . encompassed a population with a range of incomes and backgrounds, living adjacent to commercial and industrial activities all within a quick ride or moderate walk to downtown.”

Jacobs’s formative years, though, were spent in the family’s beautiful Georgian home in Dunmore, a neighboring borough that remains almost indistinguishable from Scranton. Through interviews, Lang shows how all eyes were on Monroe Avenue. “The kids knew all the adults, and the adults knew all the children,” one native remembered. “My father . . . walked around the block every evening, stopping to chat with people sitting on their porches. Everyone sat on the porches.” That native’s sister added: “These are some of the things we’ve lost today, these connections.” 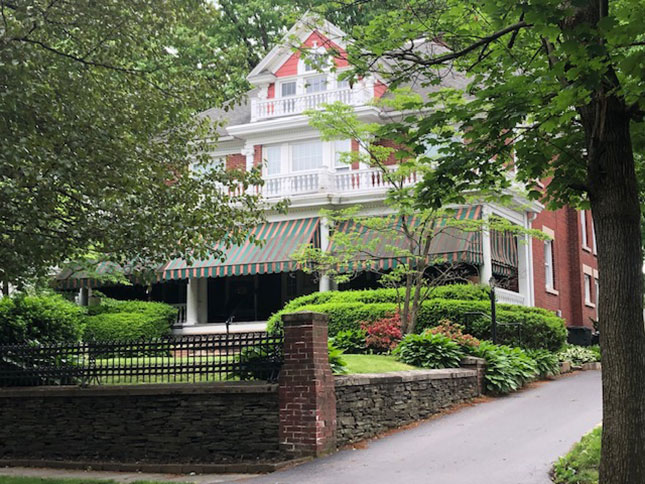 During her childhood, Jacobs would occasionally accompany her father on his calls with patients, from civic leaders to miners. “I saw quite a bit of Scranton that way,” said Jacobs. “He had all kinds of patients, of course, and he would tell us about them, so my two brothers and my sister and I got quite a picture of Scranton as a great mosaic.” Throughout the book, Lang vividly describes this mosaic, which counted a large Irish Catholic population in Green Ridge, along with Welsh Methodists in Hyde Park; German and Polish Catholic immigrants on the South Side; German Jews in the Hill Section, and a small African-American population in the Lower Hill Section. As Lang recounts, Dr. Butzner would also travel to the nearby Wyoming Valley, where Sicilian patients would sometimes pay him in homemade red wine.

Lang also devotes extensive attention to the role of Scranton’s schools in Jacobs’s early life, when she began writing. She references “the high value the city placed on education and, consequently, on the architecture of its school buildings.” Jacobs first attended George Washington School No. 3, “its ornate bull’s-eye dormers reminiscent of French chateaus,” where one former principal reminisced how “you could just concentrate on education. You know why? There were no unions, no bus, and no cafeteria.” Then, in 1928, Jacobs traveled by streetcar to downtown’s stunning School Administration Building, where she entered eighth grade at George Washington No. 1, the “model school of the city.” During lunchtime, Jacobs led her friends on “downtown exploratory jaunts,” which allowed her to observe Scranton’s “mixture of opulence and grit.” Eighth grade opened Jacobs’s “eyes to Scranton’s immigrant life and the way schools helped assimilate children of varied socioeconomic backgrounds . . . into the community and, eventually, the nation.” Shortly thereafter, Jacobs attended the “rigorous and acclaimed” Central High School, which published a subscription magazine.

Jacobs graduated from Central High during the Depression, when one teacher lamented that “Scranton’s greatest export these days is its young people.” By then, the descent of the coal industry, hastened by 1920s-era protracted strikes, heralded long-term regional challenges. But Jacobs initially stayed in Scranton, where she enrolled at the Powell School of Business and then apprenticed as a journalist at the Republican, viewed as the city’s GOP Protestant newspaper.

Jacobs moved to New York in 1934, but remained attached to Scranton from a distance. Her first book, Constitutional Chaff (1941), was dedicated to “1712 Monroe Avenue.” During World War II, as a writer for the trade magazine Iron Age, Jacobs “threw herself into an all-out campaign to save her home city.” She reported that federal government agencies had neglected Scranton when “helping to transform” struggling cities “into war boomtowns by sending them new industry and opportunities to employ their citizens.” Lang writes that Jacobs’s investigation led prospective employers to inquire about “employment, housing, and factory site conditions in Scranton and environs.” Decades later, in 1987, she campaigned to save a downtown block of dilapidated old buildings from demolition. Jacobs believed the proposed Steamtown Mall, completed in 1993, would cause “discouragement, loss of faith in the . . . downtown’s future, and a loss of care for downtown.”

At times, Lang overstates Scranton’s recent stagnation. Compared with many Rust Belt cities, Scranton is quite resilient, thanks to the city’s civic leadership and community-based economic-development measures. Some city neighborhoods have struggled, and numerous historic structures, including Scranton’s magnificent YMCA building, were lost to ill-advised “urban renewal” projects. But downtown Scranton remains a well-preserved hub of Gilded Age architecture, while the University of Scranton plays a crucial role in the central city’s vibrancy. Meantime, the shopping mall, now known as the Marketplace at Steamtown, is an ongoing adaptive-reuse project that attracts “eds-and-meds” tenants. And developers are reviving downtown’s older buildings with residential loft projects.

Green Ridge, where Jacobs spent her earliest days, remains an idyllic neighborhood. Generations of Scrantonians elect to stay for its social cohesion, cultural values, and beautiful homes—the porches and windows often affixed with elegant awnings. Here, one appreciates Jacobs’s prescriptions for urban vitality. As Lang writes, Jacobs “understood the worth of smaller, gritty cities and lessons we might take from them and from the shared values of the people in the time and place in which she had grown up.” Even now, amid so much uncertainty, parts of Scranton manage to preserve those values. “From splendid structures during Jane’s day and prior to it, we see that Scranton exhibited great pride, embraced culture, valued education, and cared for its people,” Lang writes. In many instances, the Electric City endures in spite of itself.

Charles F. McElwee is the editor of RealClear’s Public Affairs page on Pennsylvania. He is the 2020–21 John Farley Memorial Fellow, part of The Fund for American Studies’ Robert Novak Journalism Program. Follow him on Twitter at @CFMcElwee.