Several of America’s largest cities have witnessed a striking rise in homelessness—an image of public squalor that highlights deteriorating urban governance, order, and quality of life. But measuring the causes of this problem has been difficult, in part because of the difficulty of measuring the homeless population in the first place.

Researchers commonly rely on estimates provided by the Department of Housing and Urban Development (HUD) in its Annual Homeless Assessment Report to Congress. These estimates report point-in-time homelessness counts, taken in January, measured in geographic units called Continuums of Care (CoCs). While the data are imperfect and likely undercount the overall homeless population, they nevertheless provide an important benchmark to understand ongoing trends.

Aggregating these statistics to the metropolitan city level reveals that several large metropolitan areas—including Los Angeles, New York, and San Francisco—have seen substantial rises in their homeless populations from 2010–2020. In total, these three cities saw homeless counts increase over 50,000 over this period. The number of individuals seeking assistance in shelters has also risen, indicating a genuine homelessness problem. 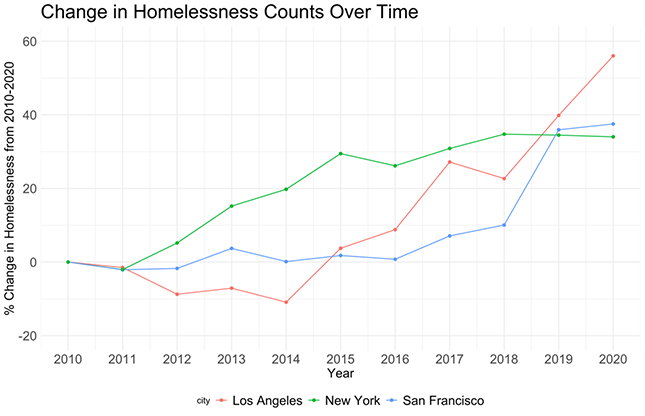 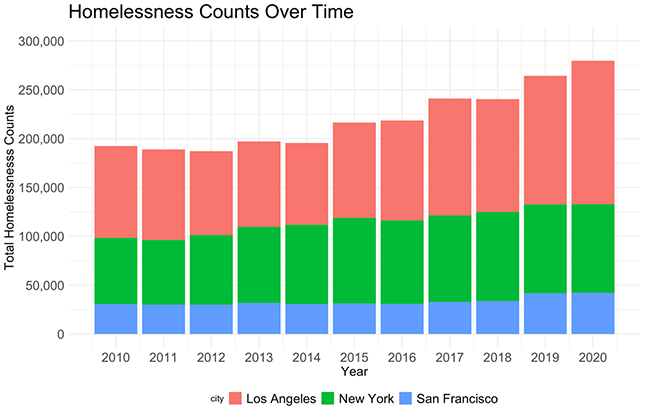 What can account for these trends? The origins of homelessness are complicated, frequently involving a combination of mental-health issues and substance abuse, combined with difficulties accessing adequate housing. Focusing on the housing issue in isolation does not always address issues with the homeless population, which are generally multifaceted. Still, rising housing costs are unlikely to help. As cities face escalating costs of shelter, more individuals are pushed into conditions of housing insecurity and precarious living situations. Shortages in available housing make it harder to address other challenges faced by homeless people, and high housing costs make it harder for homeless individuals to regain access to housing. The rapid rise in rents in these cities demonstrates the escalating costs of urban living. 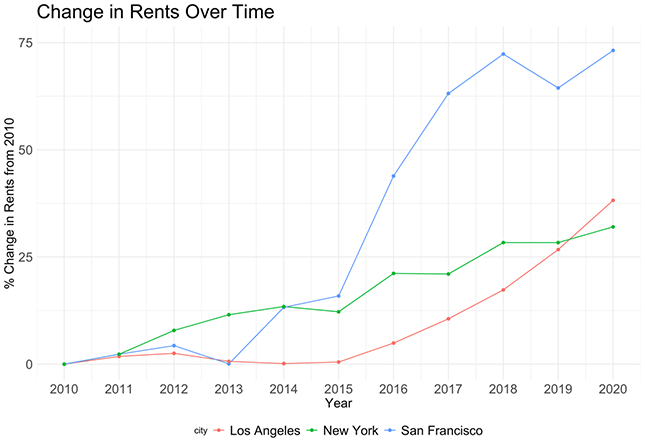 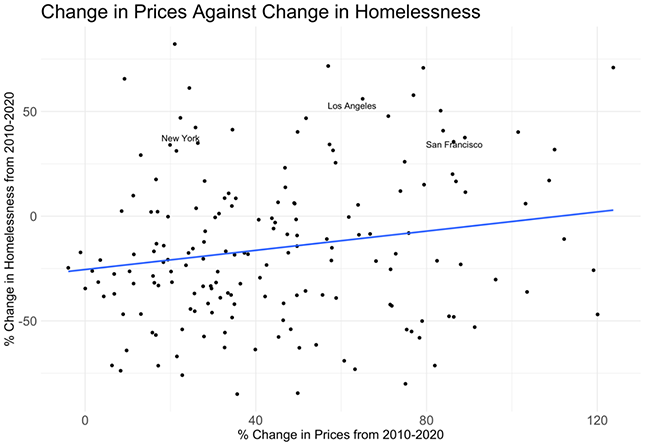 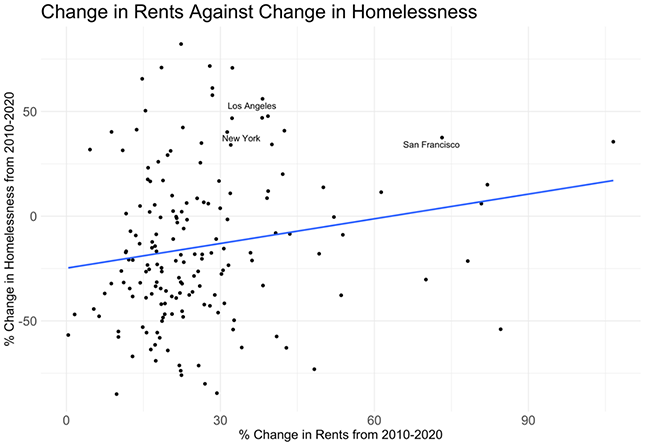 Homelessness remains a complicated phenomenon, but in the past decade it appears to have been aggravated by rising housing costs—meaning that housing policy has the potential to alleviate or aggravate the problem. Ensuring stable and affordable housing units can help families remain attached to housing units. Expanding the housing supply can’t address all of the problems faced by homeless individuals—but making housing more expensive is nevertheless likely to worsen these problems.

What has driven these increases in housing costs, and what can cities and municipalities do about it? Regulatory barriers to building housing robustly correlate with increases in both housing prices and rents from 2010–2020. Comparing regulatory difficulties in building with homelessness counts directly can be challenging because existing measures, such as the Wharton regulatory index used here, are an imperfect proxy for housing-supply regulation. Still, they reveal an upward-sloping relationship: meaning that areas with more housing regulation have seen greater growth in the homeless population. In turn, this implies that lowering regulatory barriers may address housing costs and potentially the size of the homeless population. 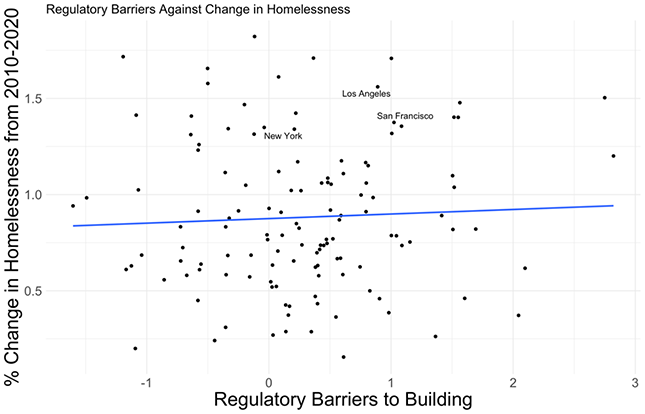 If they want to tackle the problem, regulators should consider changes that are likely to be binding. One of the most substantial shifts in housing regulation has been the virtual elimination of Single Room Occupancy (SRO) units. These units, including lower-priced hotels and YMCA locations, once provided many cheap dwellings to households facing dire financial circumstances. Typically, many units would involve shared bathrooms and other communal facilities, featuring dorm-style living. New York City once had as many as 129,000 SRO units, but that number fell to 25,000 by 1978, as well-intentioned but ultimately harmful changes to taxation and legislation facilitated the conversion of most of these units.

SRO units, to be sure, had downsides. The concentration of many low-income individuals in families in low-quality housing units generated substantial concerns about accommodation quality. Many SRO units would likely have been converted anyway—the growing economy led to steadily increased demands for building sizes. But despite their problems, SRO units nevertheless provided an important housing safety net, keeping many families housed who would otherwise have gone to the streets.

An important housing goal, as Eric Stern and Jessica Yager at the Furman Institute emphasize, should be to reintroduce micro units in the form of SROs. That can provide smaller and cheaper units to fill the demands of low-income individuals to live in housed units and keep people off of the streets. Such reforms could work by legalizing and encouraging the construction of new housing stock to fit the needs of people in desperate need of temporary shelter.

An ultimate resolution to homelessness requires careful attention to many fronts. But it is essential not to accept the status quo in which cities remain areas of both enormous opportunity and severe destitution. Addressing the high costs of housing that push too many people into these dire straits is an important tool.

Arpit Gupta is an adjunct fellow at the Manhattan Institute.

Making Sense of the Housing Market

Arpit Gupta With remote work the new normal, cities must adapt to remain competitive.
eye on the news

Wrong Time for an Amnesty

Dave Seminara Will Democrats push to reward illegal immigrants with citizenship?
eye on the news

Theodore Kupfer Early thinkers in the movement anticipated many of the concerns of today’s dissident Right.
Saved!
Close