When all the votes are counted, Republicans will have retaken the House of Representatives by at most an 11-seat margin. That narrow advantage is surprising, not only because of pre-midterm expectations but also because of Republicans’ strong performance in the House “popular vote.” Though returns from California are still coming in, the GOP seems likely to win roughly 51 percent of all House votes to Democrats’ 47 percent.

What explains this disparity? Veteran political analyst Michael Barone points to various demographic and geographic changes: lowered Democratic turnout, the effects of redistricting, and a change in how much each party’s voters “cluster” within a district. To this, we might add that Republicans ran closer margins in blue-state races that they lost, contributing to their total count of votes without necessarily netting them more seats.

In fact, an examination of the data shows that relative to 2018 and 2020, Republicans outperformed themselves in the place they are weakest: cities. While they won few urban congressional districts, my analysis suggests that they did better than they have in recent history. If this is true, it suggests that the GOP is making inroads with Democratic voters increasingly disenchanted with the party’s governance. At the same time, it exposes Republicans to the same problems to which an urban base has long exposed Democrats.

To determine how urban a given congressional district (CD) is, I turned to prior work by journalists at CityLab and FiveThirtyEight, who produced measures of urbanization for the 2018, 2020, and 2022 elections. These measures use census data to estimate the density of people across a district, giving estimates of what share lives in a high- or low-density area, for example. They also cluster districts by density, labeling some “urban,” some “suburban,” and so on. These measures give us a rough estimate of the trend.*

To measure Republicans’ urban performance, I examined their net share of the two-way vote (i.e., the Republican share minus the Democratic share of votes for either of the two parties) and subtracted their average performance across all congressional districts in that year. This adjustment lets us see how much better a Republican did in a given district in a given year, relative to how Republicans performed against Democrats overall. 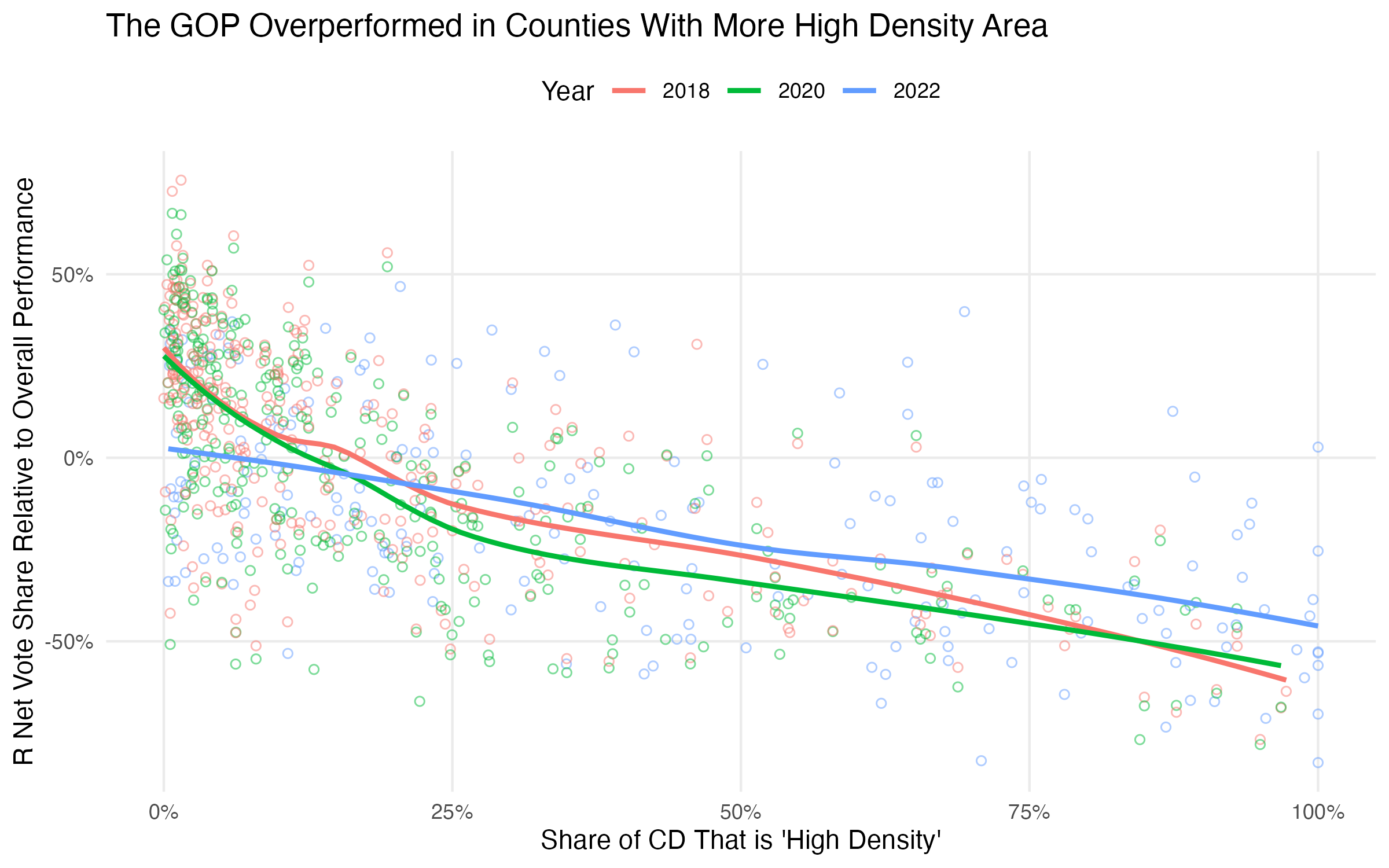 One simple way to visualize GOP relative performance in urban CDs is to compare it against the share of the CD that CityLab and FiveThirtyEight label as high density. The above plot does that, showing density versus GOP relative performance, and fitting trend lines for each year. In all three election years, the more high-density a CD is, the worse the GOP does. But in 2022, the GOP did notably better relative to the other two years in high-density areas.

This presentation gives the full sweep of the data. But another version might be more intuitive. Both the CityLab and FiveThirtyEight measures categorize CDs as urban, rural, suburban, or a mix of these. The next chart captures the mean and standard deviation of the relative net-vote share for districts that are unambiguously urban, rural, and suburban (in other words, ignoring “mixed” areas). 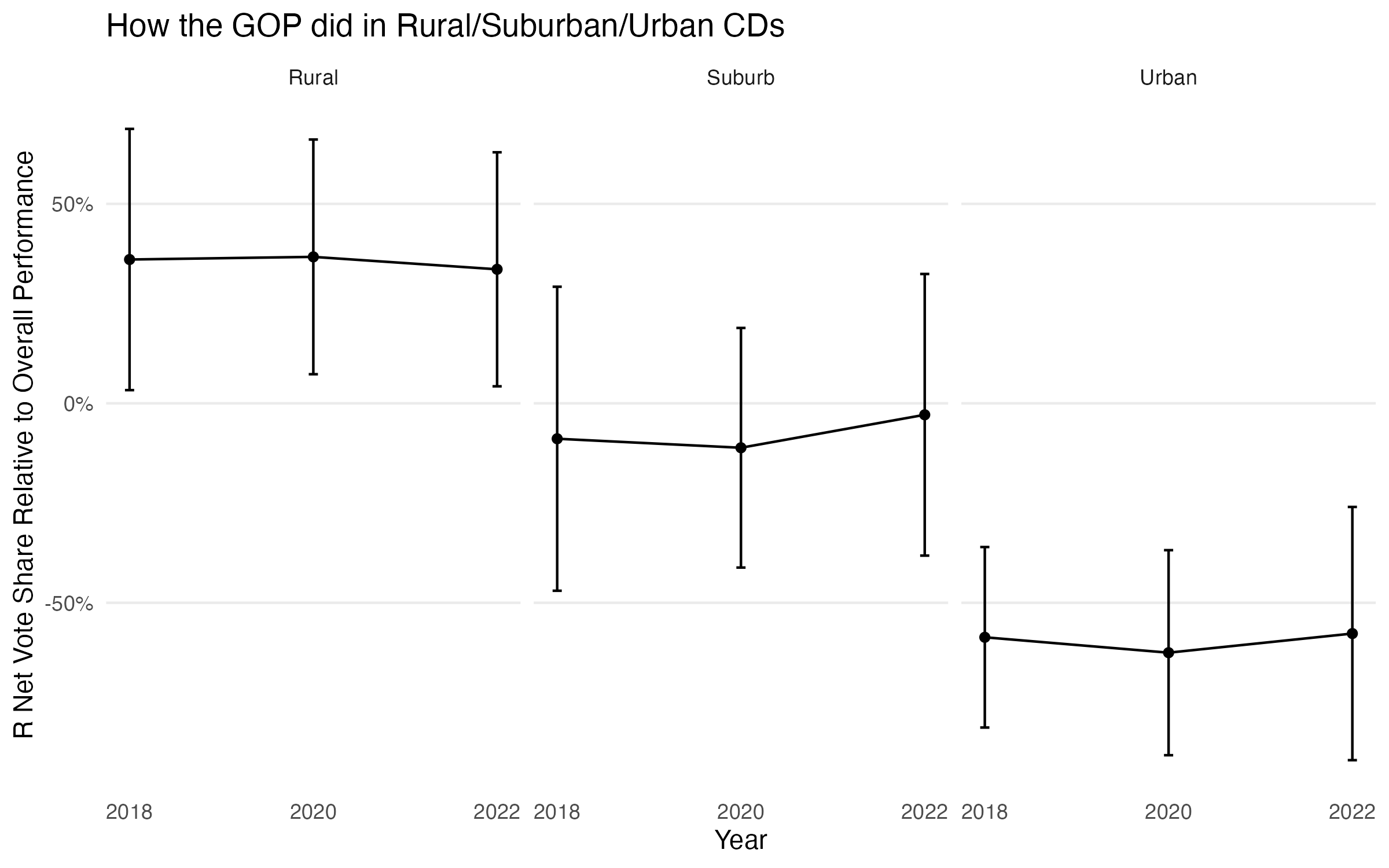 Republicans show big net shares in rural areas and big net losses in urban ones. But the size of that gap closed in 2022. In urban districts in 2018, Republicans ran about 63 percentage points behind Democrats, adjusting for overall performance. In 2022, that gap shrank to 55 percentage points.

One other way to validate this trend is to zoom in on the most urban districts and look at voting patterns there. Both CityLab and FiveThirtyEight listed as most urban the CDs that cover a few metropolitan areas: San Francisco, Los Angeles, Chicago, Boston, New York City (including north New Jersey), and Philadelphia. Aggregating CDs to the city level, among other things, allows us to avoid the problems imposed by redistricting (because the same CD now has a different area). 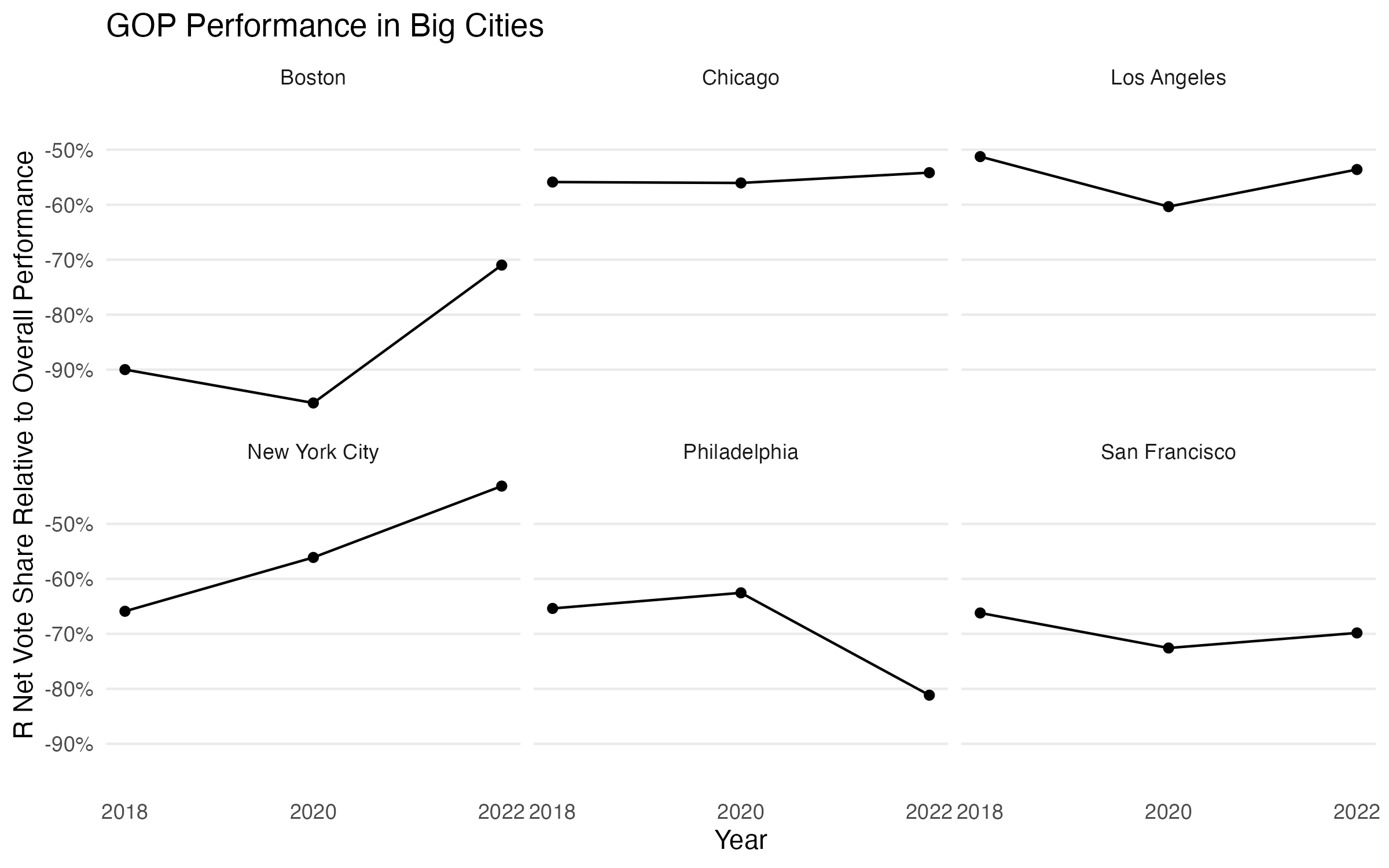 This last chart examines relative net GOP vote share in each of these areas. Clearly, the urban gain is not uniform: it’s most obvious in New York City CDs. But the GOP improved on the recent past in Boston and saw small gains in Chicago and, relative to 2020, Los Angeles and San Francisco.

A more thorough analysis would involve extending these data prior to 2018 (and, ideally, using just one harmonized measure of urbanization). But from just the observations above, what can we conclude?

One takeaway is that the GOP pitch worked slightly better in cities than it has relative to the past. Maybe rising concerns about crime and quality of life swung some voters toward the Republican option. Of course, those small swings don’t matter within House races—losing by 50 is not meaningfully different from losing by 60 in a winner-take-all system. But chipping away at Democrats’ urban base can matter in statewide races, where a few thousand votes can make all the difference.

If the GOP starts making gains in the cities, it will encounter the clustering problem that has long bedeviled the Democratic Party. As Stanford’s Jonathan Rodden explains in Why Cities Lose, the Democratic voter base is drawn increasingly from highly urban areas. Because of the first-past-the-post nature of the American system, this distribution means that Democratic voters are overly concentrated and yield fewer seats than they would if evenly spread across the country. Strong popular-vote counts and middling electoral performances are the consequence.

That risk to the GOP is a long way off. For now, it seems that Republicans may have done something better in urban areas. It’s worth investigating what that was.

*Data note: Two factors complicate comparisons between 2022 and 2018/20. First, redistricting means that the same district may in many cases cover a different area, with a different urbanization. Second, the CityLab and FiveThirtyEight measures do not estimate urbanization the same way. I have here assumed comparability of the two measures, so it’s possible that my observation is attributable to the change. However, the clear pattern in the unambiguously urban CDs suggests that that is not the case.

Hate Crimes Can Be Solved or Stopped Like Any Other Crimes

Charles Fain Lehman A foiled plot in New York shows that old-fashioned policing is the best solution to the problem.
eye on the news

Charles Fain Lehman The GOP underperformed despite, not because of, being tough on crime.
eye on the news

The Case for Optimism on Affirmative Action

Charles Fain Lehman With the Supreme Court seemingly poised to strike down the policy, why are some on the right skeptical about what comes next?
More on