Who knows exactly when the “truth wars” started, but we can be sure that they have reached a crescendo. In a recent essay, historian Timothy Snyder argued that truth is under attack in America. If it succumbs, he argues, fascism will follow because, without truth to adjudicate disputes, only force remains. Never mind that actually existing fascism was a theory of political truth, and that dictators such as Mussolini and Hitler saw themselves as foes of liberal relativism. Snyder has a point. Americans are engaged in a protracted conflict to determine what they should collectively hold as true, and they are failing in the quest.

Last month, we saw how the Trump experiment came to an end. The illusion that the election had been stolen and that armies of patriots would rise to rectify the injustice was tested in the storming of the Capitol. It collapsed like a thunderclap. Many who had embraced Trump’s web of fictions suddenly abandoned ship. It helped that the fantasy was so extreme it could never have survived the test of reality.

The main issue was left unresolved, however, and on this point Snyder is wrong—endearingly so. The test of reality consisted in establishing that the story Trump had created was not real, but it didn’t succeed in affirming any truth capable of replacing it. Over the next few weeks, some politicians and commentators proceeded to call for a national crusade to outlaw falsehood and unite every American around shared facts. Social networks even attempted to ban users and platforms accused of spreading disinformation, but to no avail. The nation remains sharply divided on precisely the question of what the facts are.

The second chapter of the “truth wars” is now taking place in financial markets. When an army of Reddit traders launched a surgical attack on Wall Street, their motives were twofold. First, they wished to show that financial markets had long ago become disconnected from reality. A new generation of traders, many raised in crypto markets, understood this better than anyone. Financial assets have no intrinsic value. They are worth what people are willing to pay. The Redditors would argue that it was always thus, but that the truth was carefully hidden by those who, powerful enough to create their own version of reality, were able to impose it on everyone else. That takes us to their second motive. The GameStop gambit amounts to a declaration of class war on Wall Street. This war is about not just wealth and power but also about what lies at the root of both: the ability to create new truths. In contemporary capitalism, economic relations rest upon actual control over the “memes” of production.

Think about it as a clash between two versions of the world. Or, more graphically, imagine that you are looking at a simulated landscape in which two computer programmers are fighting to redesign what you see on the monitor. The pixels keep changing from moment to moment. One second, the landscape looks like a mountain scene; then the mountains grow smaller and smaller until the landscape becomes a grassy plain. There is some back and forth until one of the programmers gives up and the other’s vision wins.

The same applies to stocks—or “stonks,” as the Redditors call them. Short sellers borrow and sell shares in the expectation that the price will go down, so that they can buy them back at a lower price and return the borrowed shares. Are they making a bet on the fundamentals of the stock? Not always, and not exactly. Reflexivity is a powerful market force: by selling stocks, you bring the price down in the short term, and if other market players get spooked by the drop, they will sell, too, and the process feeds on itself.

The opposite can also happen. If other players decide to buy, the price will rise, and investors who are short must scramble to buy shares and cover their positions to limit losses. Called a “short squeeze,” this was the predicament in which Melvin Capital, the hedge fund on the wrong side of the GameStop short, found itself after the Redditors planned and executed a buying spree. There is no buying force in financial markets—there probably is no force in the universe—more powerful than panicky buying by those forced to cover short positions. And since the traders were buying options rather than stocks (call options allow you to leverage your investment), dealers had to buy more and more shares as the price rose in order to keep their books hedged. With so many buyers chasing so little liquidity, prices exploded—a “gamma trap” on top of the “short squeeze.” Both fall into the category of a self-fulfilling prophecy. By the time Melvin woke up to its desperate position, the world had changed.

In the world of stocks, typically you would need a rare and unexpected event for a short squeeze to happen, something like a new patent or a takeover offer. But in the world of “stonks,” you just need the will. When the plan first emerged on Reddit, a trader going by the username Jeffamazon pointed out that GameStop might not be a “trash stock,” but he also noted that that was not really the point. The short sellers had artificially depressed the price; it could just as easily be artificially inflated. What mattered was that GameStop had an 85 percent–99.8 percent short interest, with only 50,000 shares available in liquidity, making the shorters extremely vulnerable to any changes in price. This was a contrarian bet, and the conspiring traders were ready and willing to apply the squeeze until Melvin was swamped by its losses. Reports in the media this weekend claim that Melvin lost 53 percent of its investments, a $4.5 billion loss. Analytics firm S3 said that GameStop short sellers have incurred losses of nearly $20 billion so far this year. As Jeffamazon put it in the original Reddit post, “There is literally no historical precedent for this. I just know things are about to get very insane.” He concluded, “the only way to beat a rigged game is to rig it even harder.”

What happened next was extraordinary. The foundations of the whole system suddenly seemed to wobble. Commentators rushed to condemn a group of investors for the sin of not caring about the inherent value of a company—as if the world hadn’t long ago forgotten what those words mean. After all, the U.S. stock market ended 2020 at all-time highs, even as the country entered a massive economic recession and close to half a million Americans lost their lives. Just as Twitter, Facebook, and Amazon had rushed to ban versions of the world they saw as dubious only a few weeks ago, financial institutions ranging from the Securities and Exchange Commission to the online trading platform Robinhood were now being called upon to restore order and truth. A trader at a large broker in New York, who amusingly requested anonymity, told the Financial Times that we used to live in a world where everyone watched Jim Cramer; now, he said, we live “in a world where it is coming from a lot of social media platforms. In many ways, it is a lot more democratized, but it is more difficult to understand how much of it is real.”

Robinhood temporarily halted buying in the short-squeezed stocks, perhaps to abide by capital requirements. But that only raises the question of why the system, even with no nefarious intent, always seems to work to preserve a particular class of investments from undesirable outcomes. In his interview with Elon Musk on Clubhouse yesterday, Robinhood CEO Vlad Tenev stumbled to explain what happened: there were several calls in the middle of the night from the National Securities Clearing Corporation requesting a $3 billion deposit, then lowered to $1.4 billion and finally to $700 million after Robinhood agreed to limit trade in the volatile stocks to position closing only. Musk then asked, “Who controls the clearinghouse?” Tenev could not give any answer. Citadel Securities, the electronic trading firm whose parent company had earlier provided rescue funding for Melvin, and that also does business with Robinhood, was forced to disclaim that it had “not instructed or otherwise caused any brokerage firm to stop, suspend, or limit trading or otherwise refuse to do business.”

Clearly, something fundamental has changed. Virtualism has won. The same processes that have been undermining the sense of a shared reality in American politics over the last few years are now doing so in financial markets. As the tech entrepreneur Sam Lessin pointed out, when wealth moved from physical assets to abstract digital records with no existence in physical space, economic elites acquired a new kind of power: the ability to shape reality and do it safe from prying eyes. Several hedge-fund managers told Reuters that the idea to short GameStop had long been a favorite at exclusive “idea dinners,” where fund managers swap their best trades. Now the mob has learned how to play the same game. The Redditors were not interested in GameStop stock insofar as it represented a company that sells items to turn a profit in the physical world. To them, the stock was merely a token to use in certain applications—for example, a short squeeze. And if enough people agree that this token is a store of value, then it becomes a store of value, even if by chance the underlying company were to disappear. Think of Bitcoin, a financial asset with no cash flows.

The Reddit traders—the mob—do not seem to have any philosophy of valuation. Does that make them immoral? Some, hilariously, have argued precisely that on network television. Albert Edwards, a global strategist at Société Générale, said that the Federal Reserve “should hang its head in shame” for having presided over scenes of “a retail mob feasting off each hedge fund kill.” Does this make the retailers naïve? Maybe, though many increased their net worth from $50,000 to $20 million or $30 million. What it really shows is that they understand the secret of modern capitalism—a secret that until now has been reserved for a happy few. 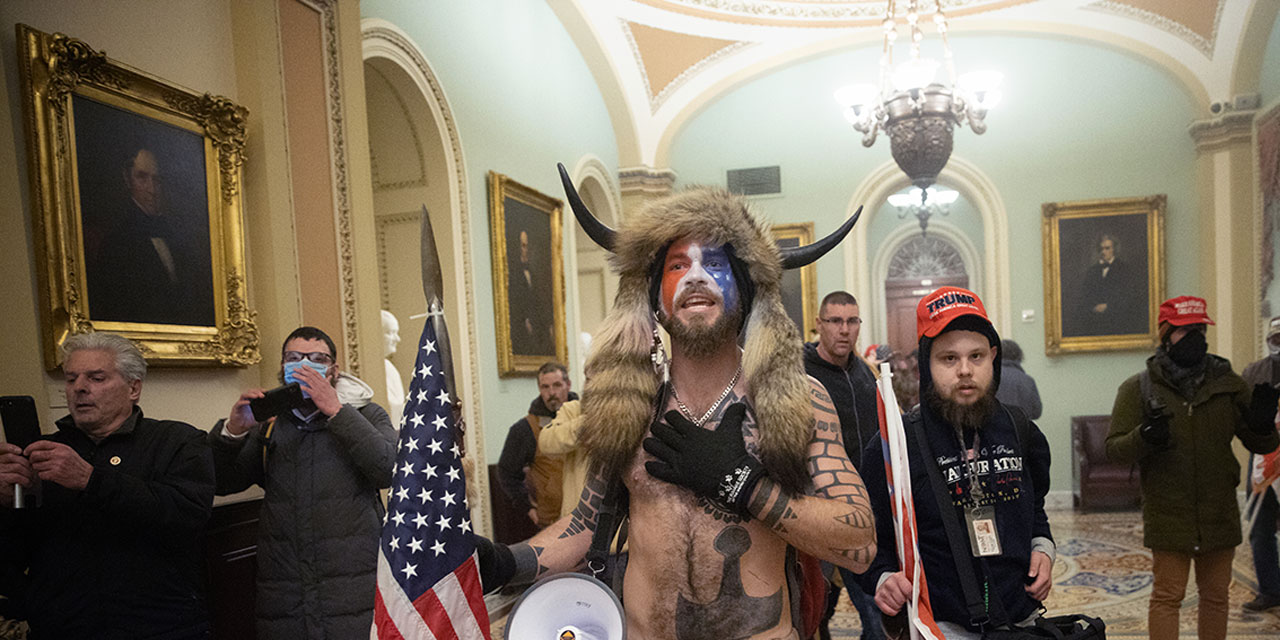 Bruno Maçães Yesterday’s astonishing events are further proof that we live in an age that is collapsing the distinction between fantasy and reality.
More on