Current architectural-alteration plans for the Frick Collection on Manhattan’s Upper East Side—which appear likely to clear their final regulatory hurdle at the end of this month—will cause considerable harm to the finest house museum in the United States. This is particularly unfortunate because the Frick’s superb classical architecture is integral to the experience of its magnificent art collection, consisting largely of Old Master paintings by the likes of Veronese, Rembrandt, van Dyck, and Fragonard.

As part of an expansion of its facilities, which include the 11-floor Frick Art Reference Library building in the northeast corner of its property, the Frick proposes to do away with its Music Room, a fine circular chamber that opens off the building’s Garden Court. Both the room and the court were designed by John Russell Pope in the 1930s. The Frick also proposes to gut the Reception Hall designed by John Barrington Bayley four decades later and to surmount Bayley’s beautiful pavilion housing the hall with a low and recessed—but thoroughly inappropriate—window wall. A new raised roof will make space for a second story on top of the pavilion, where a museum shop will be located, while Pope’s Music Room will be replaced by a special exhibition gallery, rectangular in plan. “Stripped classical” doesn’t do justice to the proposed gallery and new reception hall, which will also replace the Bayley pavilion’s bookshop, lodged behind the existing hall. “Anorexic classical” is more like it. With their dull, blank white walls, these spaces will be as cold as ice, and utterly discordant with the Frick’s architectural character.

The plans have some positive aspects. It will be wonderful for visitors to climb the original mansion’s grand staircase to the second floor, where Pope converted family quarters into museum offices. These will now be used for the exhibition of small paintings, drawings, and works of decorative art. And the Frick has long emphasized its need for a larger auditorium, better conservation facilities, and better accommodations for school groups. But to degrade the existing house museum would be a terrible mistake.

In 1912, Pittsburgh steel magnate Henry Clay Frick retained Thomas Hastings, whose New York Public Library on Fifth Avenue had just been completed, to design a home extending from 70th Street to 71st Street and facing Central Park. The Paris-trained Hastings was one of the nation’s foremost exponent of French classicism, the museum’s dominant architectural idiom. The home Hastings designed for Frick was a low-slung mansion built of Indiana limestone whose porte-cochère entrance was set back from 70th Street. The mansion’s exquisitely detailed gallery—100 feet long and 35 feet wide, with walls covered in dark green silk velvet and crowned by a segmental glass vault—fronted on 71st Street.

It was always Frick’s intention that his mansion, completed in 1914, would one day open to the public. After his widow Adelaide’s death in 1931, Pope was hired to convert the mansion into a museum. Pope was 14 years Hastings’s junior, and his public architecture took its cues from imperial Rome, not Paris. But, like Hastings, he was a graduate of the École des Beaux-Arts, and he succeeded so well in maintaining the domestic scale and stylistic elegance of Hastings’s work that one might think the entire museum was the creation of a single architect. Pope’s most brilliant stroke was to fill in Hastings’s open-air carriage court with another sky-lit space, the Garden Court, with its gorgeous peristyle, pool, and fountain. Here, an array of plants, including palms, ferns, and orchids, deepens the visitor’s enchantment. Pope also added a new Oval Room, at the foot of the Garden Court, and East Gallery—both on axis with the mansion’s original gallery—and in so doing nearly doubled the length of Hastings’s august, windowless 71st Street façade in a seamless manner. He also designed the Frick Art Reference Library, which adjoins this façade to the east.

Pope’s Music Room—mainly used for film screenings and lectures but best known as a much-loved chamber music venue—opens off one side of the Garden Court by way of two handsome little lunette-shaped, wood-paneled vestibules that reconcile the court’s rectangular plan with the Music Room’s circular form. Such refined architectural sequences are one of the Frick’s glories. Above the wainscot, the wall of the Music Room is covered in golden damask enriched with a leafy sylvan pattern. A floral rinceau runs along the frieze above. Elegant doorways are framed by Ionic pilasters. The flat ceiling extends from a cove, with ornamented ribs extending from the circular skylight’s elaborately molded frame. This room would make an excellent special exhibition gallery, and in fact it was designed to serve as a gallery. It is an essential part of one of the most superbly orchestrated spatial ensembles America has to offer. Along with the rest of this ensemble, it should be left intact.

The addition during the 1970s of Bayley’s Reception Hall pavilion, along with the adjacent garden designed by the Englishman Russell Page, was made possible by the acquisition of three properties to the east of the Frick Collection. Bayley was one of the first generation of architects to receive modernist training at Harvard’s Graduate School of Design, where his classmates included Philip Johnson and I. M. Pei. But military service in France and study at the American Academy in Rome on the GI Bill led Bayley to reject modernism, and he devoted his career to the perpetuation of the classical tradition. In so doing, and despite his great skill and intelligence, he effectively took a vow of poverty. The Reception Hall pavilion is his only significant public work, but it is arguably New York’s most important classical work of the postwar period. It should also be noted that, along with the architecture historian Henry Hope Reed, Bayley was a founding father of the classical resurgence that has slowly gained momentum in this country over the last four decades. 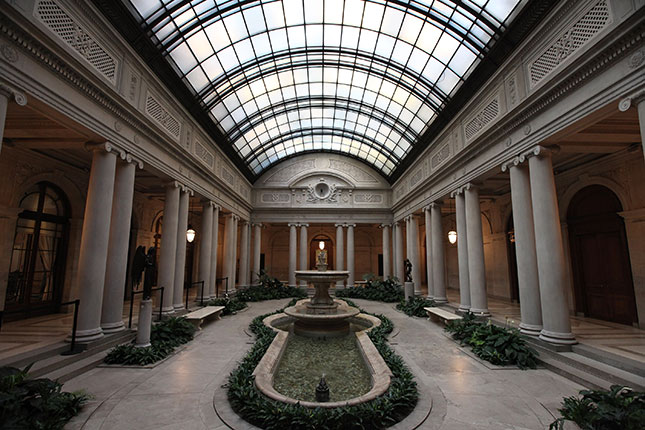 The Reception Hall pavilion’s rusticated limestone exterior with its horizontal shadow lines and elegant concave chamfers at the front corners facing 70th Street echo Hastings’s work. French windows face Page’s garden, framed by festooned Ionic pilasters and crowned by keystone volutes. Bayley extended this wall treatment to the back and far side of the garden, where his pilasters frame blind arches that abound with creeper and are capped by lunettes carved with pairs of putti flanking shields.

The Reception Hall interior, which includes a ticket desk and coat check, is less successful. It’s painted yellow, as no other room in the museum is, and the detail, while well designed—especially the contrapuntal arrangement of brackets in the frieze crowning the hall’s pilasters—does not attain the refinement of the rest of the museum. It is a very handsome space even so, with the French windows’ deep reveals conveying a welcome sense of robust construction, which adds to the pleasure of looking out at the garden. The Frick acted wisely—and courageously—in retaining Bayley and his associates, Harry Van Dyke and G. Frederick Poehler, for this project. Classical architecture was not in fashion in the 1970s, and the traditional building crafts were in low water.

And that’s precisely why the Frick’s adoption of the fashionable modernist architect Annabelle Selldorf’s ham-handed scheme for reworking 60,000 square feet of existing interior space within the Frick museum-and-library complex and adding 27,000 square feet of new construction is so unwise and uncourageous. In informing the New York Times that she wanted her Frick renovation to “have its own identity,” Selldorf gave the Pope-Bayley precedent the boot and demonstrated that she is the wrong architect for the job.

The design of Selldorf’s temporary exhibition gallery and expanded reception hall nods to tradition with moldings, hanging lamps, and the configuration of the new stairway at the rear of the reception hall. But Selldorf’s overall architectural idiom is more appropriate to an alumni hall at a cash-strapped university. She and the Frick want to atone for the destruction of the Music Room and its vestibules by retaining the room’s original doorways. But great architecture, in a room as in a building, is like a great painting or sculptural work, in which every form reinforces every other form in constituting a whole that is not only greater than the sum of its parts, but that casts a spell—precisely because of its formal consistency. Where’s the magic in retaining beautiful doorways that simply point to the poverty of their new architectural setting? This gesture reminds us of modernism’s infatuation with the fragment—in this instance, the vestigial fragments that the doorways will represent—an infatuation utterly at odds with the aesthetic ideals that motivated Hastings, Pope, and Bayley.

Selldorf’s plans to expand the reference-library complex are also unfortunate. The rear of the existing library, which rises behind the Page garden, is utilitarian in design and cluttered to one side by a fire escape. It is also largely screened by trees. Even so, there is some open space between the rear garden wall and the back of the library, and the insertion here of a handsome addition that relates to the rest of Pope’s building would be an improvement. Instead, Selldorf has bulked it out with a volume two bays deep, with drab rows of featureless windows. She has also added a new, lower block with more of the same on top of her special exhibition gallery. The two structures will be connected by a window-walled hyphen, rising above the rear wall of the Page garden and harboring the new café. This is anorexic architecture in spades, and it does not belong here.

Retention of the Music Room might leave the Frick with less special exhibition space than Selldorf’s plan would. That would hardly be the end of the world. The Frick insists on the need for “synergy”—meaning proximity—between temporary exhibits and its permanent collection, but that doesn’t mean that such exhibits will be entirely accommodated by this gallery. As in the past, such synergy should be reinforced precisely by means of selective, temporary removal of artworks the Frick owns in order better to emphasize the art-historical connections that curators wish to make. The Frick’s argument is no excuse for breaking up the museum’s architectural synergy. Moreover, to get the new facilities the Frick needs while retaining the museum’s historic character would almost certainly mean moving the Art Reference Library’s stacks underground. This would open space for offices and conservation facilities in the library building. Selldorf’s plan already calls for a subterranean 220-seat auditorium to replace the Music Room, which seats 147. This makes sense. Educational facilities also could be constructed underground if they won’t fit inside the expanded library building.

The final regulatory hurdle that the Frick faces is the municipal Board of Standards and Appeals, which must approve the zoning variances for which the museum has applied. The attorney retained by opponents of the Frick’s plans, Michael Hiller, is pressing the BSA to take the plans’ cultural impact into account. Let’s hope the old medical injunction—first, do no harm—prevails at the board’s October 30 hearing.

Catesby Leigh writes about public art and architecture and lives in Washington, D.C.