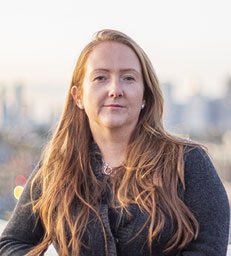 Karol Markowicz discussed raising a family in New York, the lack of leadership at the state and city level, rising urban crime, and more with Charles F. McElwee, assistant editor of City Journal. Markowicz is a weekly columnist at the New York Post, a contributor at Spectator USA, and a contributing writer at the Washington Examiner. She has written for USA Today, Time, The Forward, National Review, the Daily Beast, Business Insider, and Haaretz, among other publications. Markowicz was born in the former Soviet Union and grew up in Brooklyn, where she lives with her husband and three children.

How would you describe raising a family in New York City during this period?

It’s been a challenging time. Having to force my ten-, seven-, and four-year-olds into masks has meant that we don’t go out much. They rode their scooters while wearing masks one day and it didn’t work too well. We go to the beach often so that they can run around freely. Concern over whether schools will open has been stressful, too. I’m worried for my kids, especially the youngest, who is heading into kindergarten. Online learning doesn’t work at all for that age, but few elected officials want to admit that.

What do you think the future holds for New York City?

I believe in New York City. I continue to think that it’s the greatest city in the world and that it will bounce back from its current troubles. The question is when.

The problem is that it will require leadership, which New York really lacks on both a city and state level. Mayor Bill de Blasio is painting street murals and Governor Andrew Cuomo is hawking badly designed posters. Neither seems too concerned with children being murdered in the streets.

Another issue: so many people have fled the city. Whether they will come back is a big question. These are people of means who don’t have to return to a crime-ridden city where schools aren’t opening. They can stay sequestered in their vacation homes and hire teachers for their kids. If I were an elected official, bringing these people back would be my top priority.

What does the national climate portend for journalism?

Journalism has been in trouble for some time. It’s a problem that so-called mainstream journalists clearly favor a side—it comes across in their reporting. It didn’t start with President Donald Trump, either, though it has worsened during his tenure. The trust has been broken over decades and journalists don’t seem to realize it.

Cities should be worried that so many companies now realize that their employees can work from home—just as cities are experiencing a declining quality of life and rising crime. And with so much of regular life and culture shuttered right now, cities will have a tough time competing with the lawns and space offered by suburbs. What will make cities desirable, in this new environment? Letting “defund the police” advocates get a foothold would be dangerous for cities at any time, but especially now. No culture, plus high crime? Who would want that?

I’ve been immersed for at least a decade in nonfiction writing—I couldn’t remember the last time I picked up a fiction book—so I’ve made this my summer of fiction. It’s a good time for that escapism! I’ve read three books so far: Pachinko, by Min Jin Lee; Where’d You Go, Bernadette, by Maria Semple; and The Paris Wife, by Paula McLain. All recommended. I’m currently reading The Bronze Horseman, by Paullina Simons—it’s the best book I’ve read yet. I can’t put it down. Up next is a new book, The Nesting Dolls, by one of my favorite writers, Alina Adams. In her day job, Adams is an expert on New York City’s schools, and I read everything she writes. Because I still require a nonfiction fix, I’m also slowly reading Anarchy and the Law, by Edward Stringham.