In “Illusions of the Photographer: Duane Michals at the Morgan,” the Morgan Library continues its series of incisive photography shows. It’s bewitching and bracing, owing to the quality of the work, its smart arrangement, and the direct involvement of the artist. Michals is now in his seventh decade of active work. His subjects—time, God, age, love, and paradise, among them—are big and universal. He delivers them mostly in small, enigmatic, and often spooky black-and-white photographs, augmented by his handwritten comments.

Born in Pittsburgh to a working-class family, Michals is a self-taught photographer who learned through observation and practice. Unschooled and open-minded, he soon became one of contemporary photography’s innovators. In 1968, “Paradise Regained,” followed by “Chance Meeting” two years later, established Michals as a pioneer in sequence photography. In this genre, the work of art is a set of separate photographs collectively telling a linear, though often unclear, story. This was almost unprecedented. In the nineteenth century, Eadweard Muybridge pioneered sequence photographs—his galloping horses, for instance—but never matched them with storytelling. Art photography privileged the single, autonomous print. For Michals, the closest model was comic strips, a lowdown art form if there ever was one, and cinema, a sequence of stills made seamless by the fast-moving projector.

Michals is a master in directorial photography, too. From the 1930s through the 1960s, street photography—spontaneous, active, and documentary—dominated the medium among American artists. Michals’s work, still and choreographed, seemingly shot through a layer of gauze, evokes Edward Steichen, Holland Day, and Clarence White, though they were more mood-makers than storytellers, like Michals. 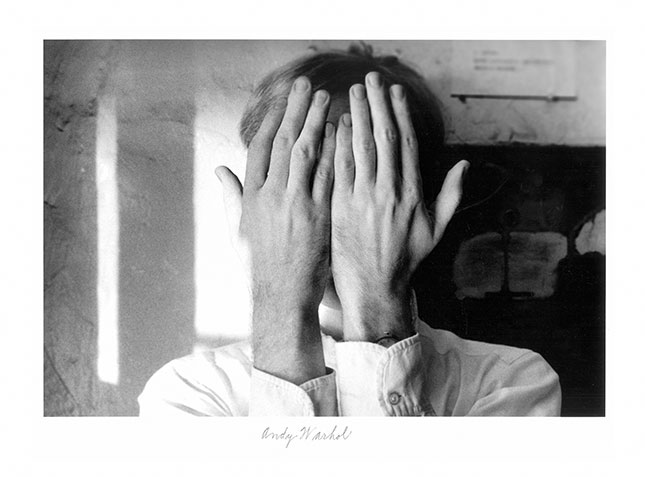 I love the show for many reasons. It’s honest and fresh. Michals worked with the curator in selecting and interpreting the work. His views are no-nonsense and jargon-free. The blissfully direct and compact catalogue is mostly an interview with the artist. His photographs might have been staged, but his comments in the show’s wall text and the book are avuncular, reflective, funny, and pungent. They give the viewer an intimate “you are there” feel. He invites us into his creative mind.

Michals also knows that he’s an old man, and that the show is his valedictory. He describes himself as “archaic” and never “hip or cool,” very much “a man of my generation.” He’s hardly a grumpy old geezer, though. Instead, he’s fascinated and amazed by how queer life is. “Things Are Queer,” from 1973, remains one of his most famous sequences. Michals is gay and honest about it, but in this group of photographs he’s dealing more with a sense of life’s strangeness and incongruities. He thinks the world has always been a queer place with few pat answers. What’s queer to him now is today’s frivolity, the “surface-skimming knowledge” of young people, and the meanness of our times—not pettiness, but an unserious, greedy streak that diverts people from big ideas like love, nature, the body’s evanescence, and the soul’s durability. All of this at a time of unparalleled prosperity and good health, which should give people a path to ideas greater than the daily hustle.

Michals is honest, too, in letting us see how much he’s loved the Morgan Library over this past half century. As a young man, he trawled the collection, coming to know it well. The museum evokes a hush without ever seeming pretentious or grandiose. Michals and the curator juxtaposed objects he likes from the permanent collection with his photographs. It’s one way to finesse the standard art history question of artistic influences.

Michals is an original, amalgamating the approaches, not the results, of many artists. He’s omnivorous in his tastes and unruled by trends or classifications. The show even features nineteenth-century comic strips that he likes. These, he says, spurred him to think about sequence photography. He knew the American artist Joseph Cornell well, and one can sense Cornell’s influence in Michals’s odd juxtapositions and oblique narrative. In “There Are Things Here Not to Be Seen in This Photograph,” from 1977, as in most of Cornell’s work, the real story seems to unfold off-stage, unseen, with the artist evolving into a medium at a seance. He loves Magritte and Vuillard for their inscrutability. Sometimes, his work is straightforward. “When He Was Young,” from 1979, is a work about aging: the young don’t naturally envision what they’ll be like when they grow old, and the old forget what they were when they were young. His current project, short films in color, have a touch of surrealism. They’re weird, cryptic, technicolor dreamscapes. It’s no surprise this first master of the sequence should end his career as a filmmaker. 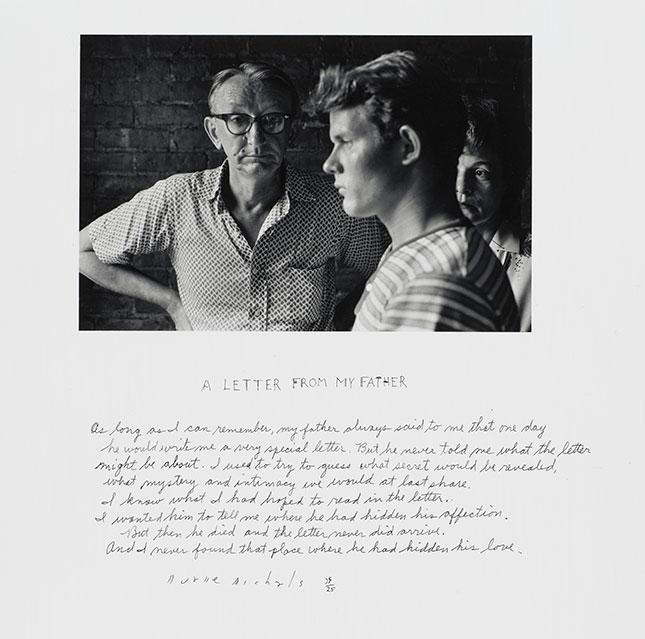 An Egon Schiele drawing, “The Embrace,” from 1914, is intimate and carnal, which Michals’s work isn’t, but it’s furtive, too, which appeals to him. A powerful, abstract Rodin drawing of Lucifer and a drawing of acrobats in space by Charles Demuth are wonderful clues. Like them, Michals loves to challenge the rational world of space and gravity. Often, his figures, simply arranged, are average-looking, with fuzzy, weight-defying contours that seem to float.

My one quibble with the show is the inclusion of Old Master drawings that seem remote from the work by Michals set closest to them. A few quotes from the artist might have easily solved the mystery of why they’re in the show. Combining words with images in a work of art isn’t new. William Blake, whom Michals admires, was a master at allying his own words with images in one potent union. Albrecht Dürer’s apocalypse woodcuts illustrated the Book of Revelation. There’s Cubist collage, Charles Sheeler, Stuart Davis, and Jasper Johns, too.

Michals’s messaging is pithy, often a few words but usually a half-dozen lines he handwrites on each print. They’re poetic, but not in verse. They’re often wistful, too. In “A Letter from My Father”—image from 1960, text from 1975—a father glares at his young son in profile. “As long as I can remember,” Michals writes, “my father always said to me that one day he’d write me a special letter.” Years passed as the son pondered why his father always seemed so remote. His father died, leaving no letter. “The letter never did arrive, and I never found where he’d hidden his affection.” 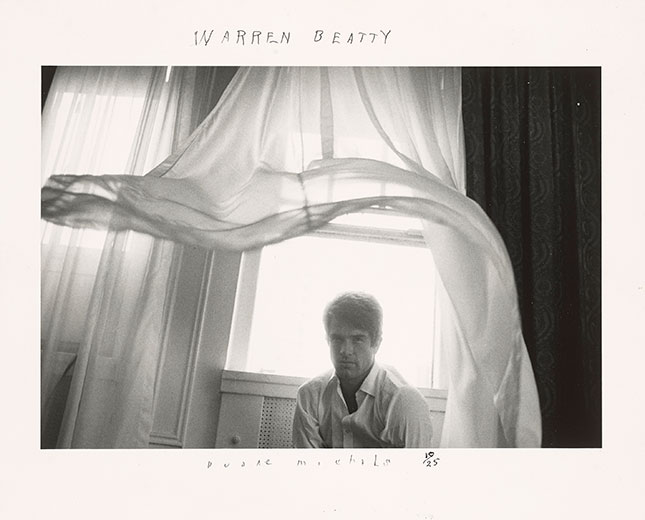 Michals’s handwriting is neat and precise, but not compulsively so. He’s from an era when good penmanship was prized. It suggests a careful, thoughtful mind. It’s ever so spindly, which isn’t a sign of age but a tendency he’s always had. It feels Victorian. His words are short—their cadence more prosaic than flowery—and there’s no slobbering poignancy. The effect of his handwriting and his choice of words is elegiac more than anything else.

The art is beautifully arranged. The show isn’t chronological but is rather organized around profound themes like immortality and time, and more earthly ones like theater and playtime. The art is also quiet. Zippy wall colors give the experience a welcome jolt. Freestanding walls offer frequent surprises in the context of a satisfying flow. The show’s curator, Joel Smith, is the Morgan Library’s first curator of photography (J. P. Morgan didn’t collect photographs). Around 2005, the library began diving into the medium in a serious way. As the Michals exhibit shows, Smith has built an impressive collection.

Brian Allen A Manhattan philanthropist and Whitney Museum trustee becomes a casualty to the social-justice mob.
books and culture