Donald Rumsfeld, a skilled bureaucratic infighter who was both the youngest and oldest secretary of defense, died Wednesday at the age of 88. Throughout his life, he attracted enemies and acolytes, both of whom attached to him for decades. He also was never afraid to speak his mind, and while hardworking, was willing to have some fun along the way.

Most of Rumsfeld’s obituaries have understandably focused on the many problems and missteps of the Iraq War, which certainly complicates his legacy, but he had a long and storied career before that. Born in Chicago in 1932, Rumsfeld’s worldview was shaped from a young age by news that he heard over the radio, including the bombing of Pearl Harbor in 1941 and the death of Franklin Roosevelt. As he wrote in his memoir about Roosevelt’s death, “Now that monumental figure was gone. I cried.” After captaining the Princeton wrestling team and serving as a Naval aviator, Rumsfeld moved to Washington. As a young congressman, Rumsfeld helped Gerald Ford supplant House minority leader Charles Halleck. This both brought him close to the future president and showed early flashes of the Machiavellian abilities that would help define his career. When he served in Richard Nixon’s administration, Nixon—who knew of such things—called Rumsfeld “a ruthless little bastard.”

Despite Rumsfeld’s sharp elbows, he was also willing to help advance the careers of people who worked for him, particularly one Dick Cheney. When Rumsfeld became staff coordinator—the equivalent of chief of staff—in the Ford administration, he brought Cheney with him as his deputy, and had no problem letting Cheney get face time with the president. Rumsfeld was happy, not threatened, that Ford told him, “Dick is great! He comes in, he’s got ten items to cover, he covers them and he leaves.” Rumsfeld and Cheney both would do whatever Ford needed. To Rumsfeld, “No assignment was too small if it eased the burden on the president. We weren’t always saving the world.”

The Ford administration was riven by rivalries, and Rumsfeld and Cheney tried hard to get things under control. As Ford press secretary Ron Nessen put it, Rumsfeld “brought order out of anarchy in the White House.” He also was a tough customer. The novelist John Hersey, writing about the Ford White House, called Rumsfeld “bright, jealous, crafty and fiercely combative.” No one was too senior for Rumsfeld to take on. When Henry Kissinger maintained an unfortunate habit of keeping the president waiting, Rumsfeld told him in no uncertain terms that he could meet the president “on time—or not at all.”

Rumsfeld and Cheney also managed the Halloween Massacre, in which Kissinger lost his national security advisor duties to Brent Scowcroft, though he remained as secretary of state. George H. W. Bush went to the CIA, replacing William Colby; Vice President Nelson Rockefeller was dropped from the ticket in 1976; and Rumsfeld replaced James Schlesinger as secretary of defense, allowing Cheney to become the youngest White House chief of staff in history. Rumsfeld’s only qualm about the maneuver was that he was leaving the White House just as he had pushed out his main internal rivals.

Rumsfeld was never shy about expressing his opinions. When New York City faced bankruptcy in 1975, the question came up in a White House meeting: should the administration support efforts to bail out the city? When no one else spoke, Rumsfeld offered his opinion: “Not just ‘no.’ But ‘hell no.’” Ford agreed, and the decision led to the infamous Daily News headline: “Ford to City: Drop Dead.” Rumsfeld also was quite stark about the deficiencies of the White House speechwriting shop, calling it in a White House memo “the dummest [sic] operation known to man.”

Unsurprisingly, Rumsfeld’s approach brought him enemies. Outgoing vice president Rockefeller warned Ford that “Rumsfeld wants to be president of the United States. He has given George Bush the deep six by putting him in the CIA, he has gotten me out. . . . He was third on your [vice-presidential] list and now he has gotten rid of two of us.” George H. W. Bush did not like him much, either, blocking him from serving in his administration and writing in his diary that Rumsfeld was “unacceptable, because [James] Baker doesn’t like him, and I worry about his game playing, and I think Brent [Scowcroft] does, too.” Later, Bush criticized Rumsfeld’s service in his son’s administration, observing: “I think he served the president badly. I don’t like what he did, and I think it hurt the president having his iron-ass view of everything. I’ve never been that close to him anyway. There’s a lack of humility, a lack of seeing what the other guy thinks.”

Rumsfeld’s service in the George W. Bush administration took a toll on his historical reputation. He was blamed for the many problems of the Iraq War, some of which were his fault and some of which were not. Regardless, his years in the Bush administration involved both a towering rise and a tragic fall. In the immediate aftermath of 9/11, he was seen as a national hero, and his entertaining press conferences were must-see TV. But things started to go awry in Iraq. The weapons-of-mass-destruction rationale for the invasion was based on faulty intelligence. The Abu Ghraib photographs of mistreated prisoners were a heavy blow. The disbanding of the Iraqi army was in retrospect a costly mistake.

Inevitable bureaucratic infighting, this time with Secretary of State Colin Powell and National Security Advisor Condoleezza Rice, made things worse. Powell was a frustrating adversary who would often not make his objections known in meetings, only to have them appear in the Washington Post. Rumsfeld was not above confronting Powell directly about the leaking, but to little avail. As for Rice, the two did not seem to gel. She even asked Rumsfeld once, “What’s wrong between us?” He responded, “I don’t know. We always got along. You’re obviously bright and committed but it just doesn’t work.” She wrote in her memoir that she saw the word “bright” as condescending. By the end, Bush realized that Rumsfeld had to go. White House aide Peter Wehner, who had become physically ill over the war, urged his removal. Bush took inspiration for the firing from Richard Carwardine’s Lincoln: A Life of Purpose and Power, which talked about Lincoln’s removal of generals in wartime.

Despite efforts to turn him into a latter-day Robert McNamara, a post-administration Rumsfeld did not wallow in despair. Perhaps this is because throughout the ups and downs of his career, Rumsfeld knew how to have fun. In his memoir, he tells of the time that he found out on a Sunday that Newsweek had discovered the secret plans for the Halloween Massacre. Given the publication schedules in those pre-Internet days, Rumsfeld knew that the scoop would not be published until the following Monday, so he kept his plans to attend the Washington Redskins game that day, knowing that he had a week to prepare for handling the leak.

He could also both make and take a joke. During his tensions with Rockefeller, he and Cheney once saw on TV that Rockefeller was flying down to Washington with his family and staff on a few airplanes. Rumsfeld turned to Cheney and said, “You know, damn it, Cheney, that’s the problem. There’s Rockefeller with all those airplanes and all that money and all those staff people and all I’ve got is you.” On another occasion, after he, Cheney, and Rice mocked Powell about fancy State Department lunches, Powell invited them to a formal lunch at State with covered dishes. As Rumsfeld recalled, “When we took the silver metal covers off, underneath was a plain paper bag with our sandwich in it. It was a classic ruse.”

Amid all the infighting and the Iraq War setbacks was a record of great accomplishment. Rumsfeld helped stabilize an unsteady Ford administration in the dangerous days after Nixon’s resignation. He steered such key weapons systems as the MX missile, the B-1 bomber, and the Trident submarine into being. He was an early proponent of the need to protect the nation against biological attacks, warning that “Biological is different. It is also something that we’re not comfortable with . . . the fear of a biological weapon is quite different than the fear of nuclear weapon or even a chemical weapon.” And “Rumsfeld’s Rules,” a compendium of sayings such as, “If you are not criticized, you may not be doing much,” helped educate generations of staffers on how to be effective in Washington.

Though he had legions of enemies, rivals, allies, and followers, Donald Rumsfeld was always his own man. When documentary filmmaker Errol Morris asked veteran Pentagon correspondent Jim Miklaszewski whom Rumsfeld listened to, Miklaszewski’s answer was unhesitating. It was also right on target: “Donald Rumsfeld.”

Tevi Troy is a senior fellow at the Bipartisan Policy Center and a former White House aide. His latest book is Fight House: Rivalries in the White House from Truman to Trump. 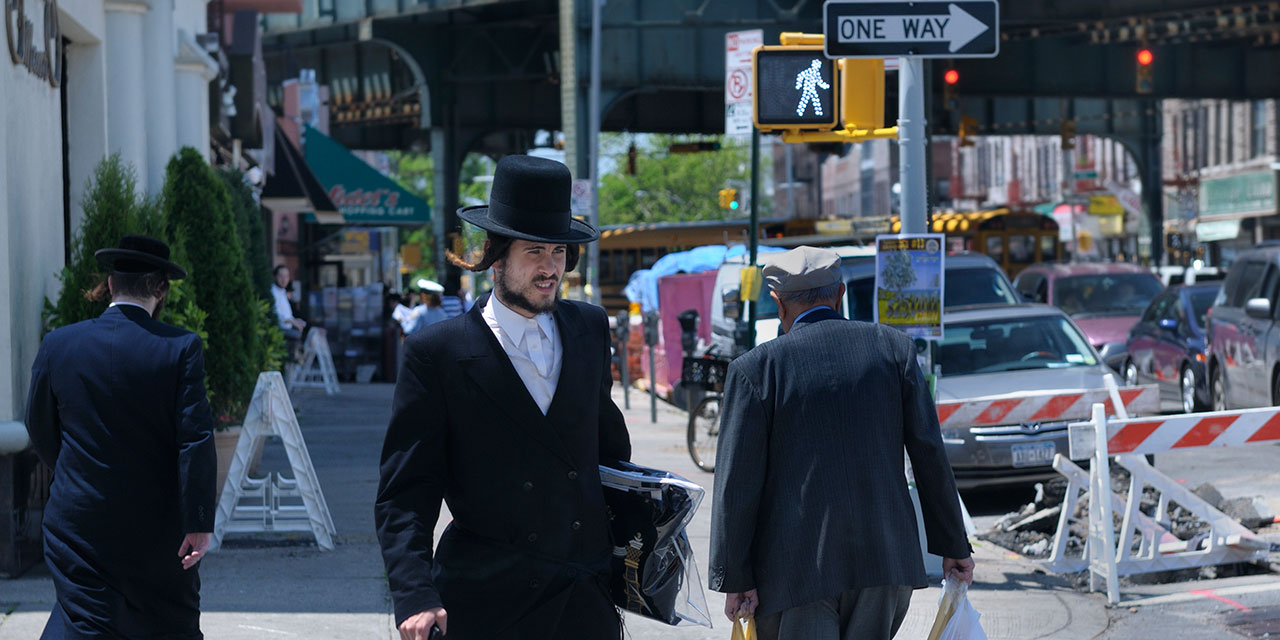 Tevi Troy Troubling FBI statistics and recent anti-Semitic incidents should remind the U.S. that other countries have lost their Jewish populations—to their own detriment.