In September, New York mayor Bill de Blasio flew to San Francisco—and not on an electric-powered plane—to lecture attendees at a climate conference. Noting that his city had been “shaken to consciousness” six years previously by “monster storm” Sandy, he informed the audience that the city is the first in the country to shed its pension-fund investments in hydrocarbon companies. In taking “$5 billion out of the hands of that dying and broken industry,” the mayor continued, New York was sending a signal to the markets that oil and gas “belong in only one place—stranded in the ground.”

Though they were music to the ears of an audience worried about climate change, de Blasio’s words overlooked an inconvenient truth: by every measure, New York’s streets are growing more clogged with carbon-spewing cars and trucks, and the mayor shows little practical interest in asking New Yorkers to quit driving or riding around in such vehicles, in the interest of saving the planet. According to city data, cars and trucks are responsible for nearly 30 percent of New York’s carbon emissions, but reducing carbon isn’t the most compelling reason to discourage driving. The cars and trucks that clog city streets harm the quality of life for residents, who must endure idling tour buses, and for office workers, who must walk into traffic to cross the street, when, as is often the case, a driver has blocked the intersection by trying to beat a red light. Unlike many American cities, New York has the density and infrastructure to curtail vehicle traffic. Already, 77 percent of people entering Manhattan on a typical fall day do so via subway, bicycle, commuter rail, ferry, or bus—not in a private car, taxi, or truck.

Under de Blasio’s watch, though, traffic is growing. For the fiscal year ending in June, average traffic speeds in Manhattan below 60th Street were just 7.1 miles per hour, down from 8.7 miles per hour five years ago. As the city notes in its latest management report, the desired direction for speeds is “up,” but the five-year trend is “down.” And that’s nearly a year after the mayor announced an initiative, in October 2017, called “clear lanes,” in which 150 additional traffic and police officers would stop people from blocking intersections and bus and bike lanes; from double-parking; and from otherwise cramming thoroughfares.

To the mayor’s credit, clear-lanes enforcement is up: in the first seven months of 2018, officers wrote 4,670 tickets for “spillback,” or blocking an intersection, compared with 1,560 over the same period in 2017. The police gave out 6,156 tickets for blocking bus lanes, up from 1,094 last year. Tickets for not yielding to a pedestrian are up, too, from 31,516 to 33,130. Perhaps it will just take a few months to see the results on city streets.

Yet it’s hard not to suspect that the extra officers are merely fighting a rising tide: more Amazon deliveries, more Uber cars, and more midtown street lanes out of commission for private-sector construction projects mean more traffic. Add to that, too, more city-owned cars. Despite modest success, during the Bloomberg era, of cutting the size of the city’s fleet, New York now has 31,002 government cars and trucks on the road, up from 27,300 in 2014. It may be understandable that the number of heavy-duty trucks has risen with the city’s population—it’s hard to move garbage on a subway—but the number of light-duty vehicles for city workers is up, too, over the last five years, from 11,595 to 13,229.

Even as the city adds more of its autumn “Gridlock Alert” days, de Blasio dismisses a better idea: charging people to drive into the most congested parts of Manhattan, and then, once they’ve arrived, charging them for the time their vehicles are idle, parked on a street, or double-parked. De Blasio could then use the opportunity provided by more efficient use of road space to carve out more space for people who choose to move about by bus, bicycle, or on foot, sometimes in conjunction with a subway trip. Under such a congestion-pricing system, the city could experiment with, say, allowing private bus and van companies to reserve space in a bus-only lane, transporting their passengers more quickly, or increasing the congestion fee on those gridlock days, further discouraging vehicle traffic.

De Blasio has called congestion pricing a “regressive tax,” but few poor people drive private cars or hire taxis to take them into Manhattan. It’s hard not to think that the mayor’s own lifestyle is influencing his judgment: several times a week, he travels from his home on Manhattan’s East Side to his old neighborhood in Park Slope, Brooklyn, via city-owned SUVs—to go to the gym. The mayor points out that his fleet of personal-protection SUVs is made up of hybrid vehicles, but those still cause congestion, especially when parked illegally. They thus contribute to the slow speed of all those non-hybrid trucks and cars competing with him on the crowded streets.

The mayor’s climate-change rhetoric aside, fossil-fuel executives can relax, for now: their resources won’t stay “stranded in the ground” under Bill de Blasio. 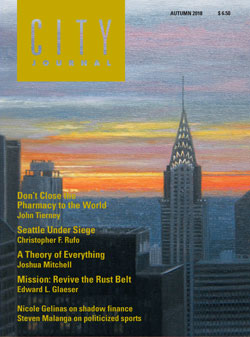 Nicole Gelinas, Rafael A. Mangual The paper’s latest editorial is full of analytical mistakes.
More on