“Man Sentenced to More Than 20 Years in Prison for Illegal Possession of a Firearm and Drug Trafficking.” “Three Charged as DEA Seizes More Than $2.4 Million in Cash, Drugs.” “Enforcer for Drug Trafficking Organization Sentenced to More Than 19 Years in Prison.” Such headlines were common between 1995 and 2015, as prosecutors targeted violent felons and took them off the streets during the Great American Crime Decline, but they have disappeared over the last few years. In Cleveland, these headlines are making a comeback.

During the Covid pandemic, most prosecutors’ offices ground to a halt while violent crime surged. But the United States Attorney’s Office for the Northern District of Ohio managed to double its cases charged, targeting drug and gun offenders. This kind of precision prosecution can make a real dent in the problem.

In 2020, the national homicide rate saw a one-year increase of almost 30 percent, the largest on record, and homicides continued to rise in 2021. Cleveland was not immune to the violence. The “Mistake by the Lake” saw 120 homicides in 2018 and 118 in 2019 but homicides jumped to 193 in 2020. However, unlike several other cities that saw new records for homicides in 2021, Cleveland began to see a decline last year—recording 170 homicides.

With lockdowns and staffing issues, many prosecutors’ offices have had trouble charging cases. Some experts cite the backlog as one factor behind the homicide spike. Yet federal prosecutors in Cleveland have managed not only to stay on track but also to increase their indictments during the pandemic. In the waning years of the Obama administration in 2016, the United States Attorney’s Office for the Northern District of Ohio charged only 381 new cases for the year. By comparison, in 2021, the office indicted 846 cases. The following chart shows the progression in new indictments by the Cleveland prosecutors: 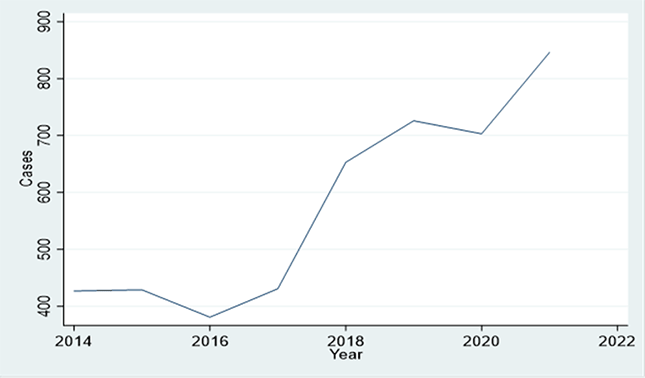 The tactics being used by federal prosecutors in Cleveland are simple—and scalable to any big city. The Project Safe Neighborhoods program targets violent offenders, using drug and gun prosecutions to sweep the streets clean of those criminals most likely to be involved in homicides. Federal sentencing guidelines bring heavy penalties, letting prosecutors remove the worst offenders from communities for a long time.

The United States Attorney’s Office in Cleveland is taking advantage of the fact that violent crime is heavily concentrated among relatively few offenders. In general, less than 5 percent of perpetrators are responsible for over 50 percent of violent offenses. By targeting violent felons carrying guns or dealing drugs, federal prosecutors are going after that precise cohort. This enables the incapacitation of violent offenders without sweeping up low-level miscreants.

To appreciate the work being done by federal prosecutors in Cleveland, consider the story of Darek Lathan. Lathan was an enforcer for a drug crew, armed day and night to perform violent acts associated with drug trafficking. He also was a convicted felon, with prior offenses for kidnapping, armed robbery, and drug dealing. When Lathan was caught with a gun during a search warrant, prosecutors charged and convicted him as an armed career criminal in possession of a firearm under federal statutes. On December 8, 2021, this one-man crime wave was sentenced to 19 years in federal prison. Over the course of that sentence scores of crimes will not be committed by him. And the message to the streets is clear: don’t get caught with a gun.

This approach has proved effective historically. Boston’s Operation Ceasefire in the 1990s—specifically targeting violent gang members for federal prosecution using gun and drug charges—resulted in a huge drop in homicides and gang violence. Project Exile in Richmond, Virginia, used the same methods during the same time period to cut homicides by 33 percent in one year and by 50 percent in ten years. Such successful programs led President George W. Bush to initiate Project Safe Neighborhoods programs throughout the country in 2001. Felons began to understand that carrying a gun in an American city came with severe consequences. Simply put, a felon without a gun is much less likely to commit a murder than a felon with a gun.

Good results tend to be a lagging indicator from the implementation of such crime-reduction strategies. If these policies work for Cleveland, the effects should continue to be felt over the next few years. Will the incoming U.S. attorneys appointed by Joe Biden follow Cleveland’s lead? If they do, American cities might start controlling violent crime again.

Tom Hogan has served as a federal prosecutor, local prosecutor, and elected district attorney, and currently is in private practice.

How Will Memphis Respond to Eliza Fletcher’s Murder?

Thomas Hogan The city’s progressive prosecutor has a decision to make.
eye on the news

Get Back to Work

Thomas Hogan The chief prosecutor of Spokane, Washington, grandstands instead of doing his job.
More on

Diversity Up, Public Safety Down

Noel Yaxley London’s new police commissioner touts increased female representation on the force, but crime in the city is rising.
eye on the news

Theodore Dalrymple Whether they realize it or not, criminal-justice liberals enable the dangers they decry.
Saved!
Close