Crime and Policing in New York 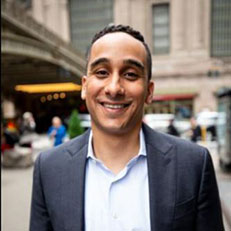 Rafael Mangual discussed crime in New York, criminal-justice reform, the rising tide of anti-cop sentiment, and more with Daniel Kennelly, associate editor of City Journal. Mangual is a contributing editor of City Journal and senior fellow and deputy director of legal policy at the Manhattan Institute, where he works on issues ranging from urban crime and jail violence to broader matters of criminal and civil justice reform.

Mangual holds a B.A. in corporate communications from the City University of New York’s Baruch College and a J.D. from DePaul University in Chicago, where he was president of the Federalist Society and vice president of the Appellate Moot Court team.

After Covid-19 and this past summer of protests and riots, what are your thoughts about the city’s future? Is New York headed for decline, or do you see a way for it to bounce back?

Since at least the early 2000s, I took for granted that the future would bring further improvements: more investment, a more robust collection of small, medium, and large businesses serving the city. And, perhaps most importantly, steadily decreasing crime rates in even the toughest neighborhoods. In 2000, 13 of the city’s precincts saw 20 or more murders. By 2014, that number was down to one.

Particularly on the crime front, all indications are that we are in for an extended period of decline. Through September 20, the city has seen murders rise by nearly 40 percent and shootings balloon by more than 93 percent. Those numbers look even worse if you extend the observation period to two years. If these increases are the result of the policy choices at the state and local levels in New York over the last few years—and they almost certainly are—then we have to ask ourselves what the prospects are for reversing course. Sadly, I don’t see any.

Your feature from the Summer 2020 issue of City Journal, “New York’s Department of Overcorrection,” talks about some of the worst ideas in criminal-justice reform. What are some of the best ideas out there now?

Some of the best criminal justice ideas out there today include many of the same ones that helped New York turn itself around in the 1990s: data-driven policing, informed by honest evaluations of what works; the imposition of real consequences that incapacitate repeat and serious violent offenders; and urban policy that places a premium on public order.

These principles should still guide us. But we should also be using technology to implement those ideas more efficiently and to deploy our resources more strategically. The NYPD, for its part, has generally done this well. What I worry about is the extent to which their efforts are being undermined by reforms.

At a time when a police officer’s choices, often made in fractions of a second, can race halfway around the world before facts and context have a chance to catch up, why would anyone want to be a cop? And what will happen to policing as a profession?

This is a really important question. The current climate is as anti-cop as it has ever been in my lifetime. Policing has long been considered a thankless job, but now it’s one that is cause for public scorn. Those problems are compounded by the risks of violent encounters in the line of duty. What I fear is that policing will come to be seen as an undesirable career path by well-educated individuals who might otherwise have been interested in public service. If that happens, what we’ll likely see are worse outcomes with respect to crime fighting, and more legal missteps when it comes to operating within the bounds outlined by our laws.

What’s your favorite piece of fiction about crime or policing, and why?

I’m not sure I could point to a single favorite. HBO’s The Wire comes to mind. I recently re-watched a movie called End of Watch, which is as good a cop movie as I’ve seen. One scene that always stood out to me is when the two main characters—LAPD officers played by Jake Gyllenhaal and Michael Peña—are back on duty after saving children from a burning house. They both talk about their significant others being upset with them for having taken that risk. It’s a subtle but powerful moment in the film that reminds us of the reality that every cop has a family that desperately wants him to come home safely. That cops nevertheless put themselves in harm’s way is something we should all appreciate.

All that said, I do think that there’s real value in people doing what they can to confront the realities of crime and policing. Some ways to do that include going on ride-alongs. Watching some of the countless hours of bodycam footage available on the Internet (a good source for these is a YouTube channel called Police Activity) will also deepen one’s understanding of just how difficult violent encounters can be—and how fast they can unravel.