Holding Up a Mirror

Jay Caspian Kang has worked for Vice, Grantland, The New Yorker, and the New York Times—his current gig—which is to say that he is capable of writing insular progressive pabulum. But quite often, and certainly at a higher rate than his contemporaries, his writing is laced with a disdain for his coastal progressive audience. That he’s been able to position himself as an occasional critic of woke excesses while remaining ensconced in elite media institutions testifies to his shapeshifting abilities. Kang’s writing tries to get to the bottom of not only the subjects he covers but also of himself. To read Kang is frequently to watch him grapple with two questions: Who is Jay Caspian Kang? And what is wrong with him?

Kang is honest about his self-involvement, one reason I’ve been a fan of his work ever since he made his name at Grantland as one of his generation’s finest sportswriters. But he was not just self-involved—he was also, to my delight, angry. I’m a writer with a bit of an angry streak, too, and I saw a kindred spirit in Kang. His latest, The Loneliest Americans, finds him yet again mining this self-involvement and anger to great effect on the subject of Asian-American identity. And that has placed him in the crosshairs of the well-credentialed Asian-Americans who compose part of what Kang calls the multicultural elite.

In The Loneliest Americans, Kang dissects the “Asian-American” label, finding it heavy on contradictions and light on substance. Very little history or solidarity binds the disparate identities typically lumped together under the Asian-American umbrella. Kang compares the assimilating Asian, “who wants to become as white as will allow” and is concerned with “superficial markers of identity, whether rituals around boba tea, recipes, or support for ethnic studies programs and the like,” with the “first-generation undocumented immigrant from Fujian province who delivers their meals.” The assimilating Asian has taken it upon himself, Kang argues, to speak for the working-class Asian on the societal fringes, while enjoying the spoils of elite American life due to his proximity to and understanding of “whiteness.”

In a chapter titled “The Making of Asian America,” Kang diagnoses the differences between the two groups’ self-conceptions. Elite Asian-Americans tend to favor an oppression narrative “focused on getting a seat at the wealthy white liberal table.” Their grievances usually revolve around media representation, such as a perceived lack of bylines at prestigious coastal publications. Insulated from economic concerns, the elite Asian-American is “oppressed” if his aesthetic concerns aren’t granted top billing in the political status game played on social media. By contrast, the main concern of the Asian working class, like that of most people removed from the levers of institutional power, is putting its head down, working hard, and getting by as peacefully as possible in a country that, at best, is disinterested in its plight. It is impossible for these disparate groups to be brought together under a single banner: one must occupy an elite cultural position before he can traffic in the fashionable texts and ideas that flatten complex groups of people into simple identity markers. 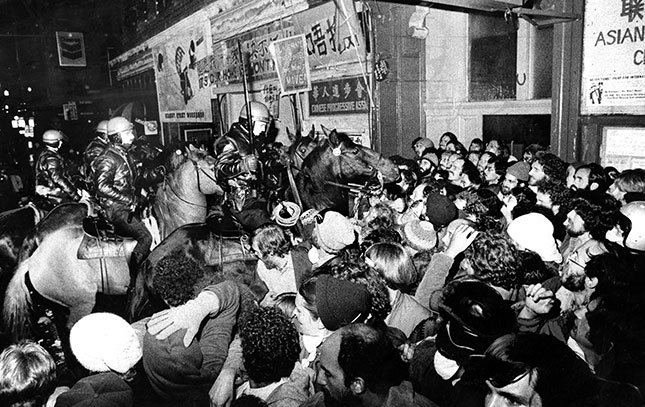 Kang highlights the limitations of the Asian-American label by detailing the saga of the International, a San Francisco hotel—known as I-Hotel to activists—whose residents, mostly Filipino and Chinese men, began receiving eviction notices in 1968. Around the same time, Yuji Ichioka, a graduate student, and his girlfriend, Emma Gee, founded the Asian American Political Alliance (AAPA). Inspired by the black and Hispanic radical movements of the time, Ichioka also created the term “Asian American.” “The new term,” Kang states, “was directly political: an appeal for solidarity among people of Asian descent and a recognition that they shared the same struggle. What the struggle was—and is—remains largely undefined.” The AAPA and the radical activist groups it spawned, hoping to define their struggle, jumped in the fight to save the I-Hotel and its residents. In a battle that would span the better part of a decade, with fires breaking out, near evictions, and the activist groups battling one another, the final outcome was all but inevitable:

The Chinese American students fought both with the Filipino groups and among themselves, resulting in another torrent of names and acronyms: the Wei Min Shei merged with the RCP, while the IWK went on to start the LRS, and so on. Some groups—not all—began to argue over things that had little to do with the hotel: sympathy toward Cuba, gay rights, or fealty to the USSR. Internecine fights are an unfortunate hallmark of the political Left, but in this case they betrayed the difficulties of creating a coalition out of people who didn’t share much of a history. The tenants of the I-Hotel could unite behind very real demands, but for the various student groups trying to test their nascent solidarity, the needs of “Asian Americans” could never quite take precedence over the ideological and identity concerns of individual groups.

Similar stories continue to unfold as the identity-obsessed have tried to create coalitions among disparate groups. Kang’s left-wing commitments on class issues are unmistakable; perhaps that’s why he remains one of the few progressives willing to write about the increasing failure of intersectionality to resonate with working people. Or perhaps it’s because of the liminal space in which Asian-Americans find themselves and the loneliness this engenders. That loneliness, Kang writes, “comes from the realization that nobody, whether white or Black, really cares if we succeed in creating any of these identities. . . . It’s hard to blame anyone for not caring enough about Asian Americans, because nobody—most of all Asian Americans—really believes that Asian America actually exists.” That is a tough pill to swallow, and certainly one other Asian-American elites have spat out, but it’s why Kang can be such an incisive critic.

The author returns to the subject of himself in the book, explaining his conception of race through his adolescent attraction to hip-hop. The musical genre “symbolized a rejection of whiteness on a personal level, even if the rest of our lives embraced the material gains of assimilation,” he writes, showing that “you can attain the whiteness that matters without feeling particularly white.” It is in this racially nebulous state that Kang, as a correspondent for Vice in 2016, attends the protests in Minnesota after the death of Philando Castile from a police-involved shooting. Kang embeds himself with the sophisticated activist machinery that coalesces after such events and directs the protests—and it is here, surrounded by people who share his views on America’s racial issues, that he encounters the woke ideological creep splintering the tenuous progressive coalition. After trying to interview a white protester named Amber, who is swiftly pushed to the side by an activist leader because “we have to prioritize black voices before white ones,” Kang speculates: “Today, I wonder how much of my quiet objection to these tactics came from the realization, however subconscious, that while I might be a fellow ‘person of color,’ I had no more right to speak than Amber did.”

I’m a right-leaning Cuban-American, certainly not the intended audience for this book. That Kang’s work nevertheless resonates owes not just to his keen abilities as a social critic but also to a style that disgusts his elite detractors and is unapologetically masculine. This is a book by a guy who cut his teeth writing about sports, and it shows. Kang’s writing recalls Norman Mailer: a coolness and a swagger, even when he’s being self-deprecating, runs through his work.

Thus, it is no surprise that the book’s standout chapter, titled “The Rage of the MRAZNs [Men’s Rights Asians]”, deals with issues of masculinity from the point of view of the Asian-American male. Others have pointed out (and Kang barely leaves unsaid) that while the Asian-American female is unfortunately fetishized, the Asian-American male often doesn’t register as a sexual object. In this chapter, which a recent reviewer in New York called “testosterone-poisoned,” Kang profiles a number of “red-pilled” Asian-American men who go to radical lengths to announce their cultural presence and to be seen as men rather than merely dutiful, sexless faces. Though he never justifies their abhorrent behavior (including harassment campaigns directed at Asian-American women), Kang does seem to understand how they came about. “The differences between me and the MRAZNs could largely be explained through happy accidents that all landed on my side of the ledger,” he writes. “But as I tallied up all the credits and debits that had produced someone like me—my ability to talk sports, including an acute recall of obscure baseball statistics; my reasonably deep literary knowledge, which ranged from the confessional poems of Anne Sexton, Sylvia Plath, and Robert Lowell to modern staples like W.G. Sebald and Roberto Bolano—I understood that these angry boys saw each one of those adjustments as a betrayal.”

One hopes that Kang’s interest in the truly lonely—from the unseen Asian women who work at massage parlors to the enraged Asian males who demand an altogether different sort of visibility—will continue to be the driving force behind his work.

Alex Perez (@Perez_Writes) is a writer from Miami.