High housing costs make life expensive in much of the U.S., and Wisconsin is no exception. In the Badger State, the average price of a home increased by more than 6 percent from the fall of 2020 to the fall of 2021. But Milwaukee’s past offers a solution for the state’s future: duplexes. Owing to a legacy of industrial-era construction, Milwaukee has the largest share of housing provided by duplexes of any major American city.

The Census’s American Community Survey provides estimates for housing types in various American cities. The Washington Post conducted an analysis of this data in 2014, but new data offer a more current look at the state of housing in America’s 50 most populous cities. Notably, Milwaukee boasts the highest proportion of duplex housing, with 20.6 percent of occupied housing units being duplexes. Chicago comes in a distant second in duplex share, at 13.7 percent, while Boston ranks third, at 13.4 percent. The graph below provides a survey of housing diversity across American cities: Boston has the most triplex and four-unit housing; Philadelphia the most single attached units, such as row homes; Detroit and Bakersfield, California, have the most single-unit detached houses; and Mesa, Arizona, has the most mobile and RV housing. 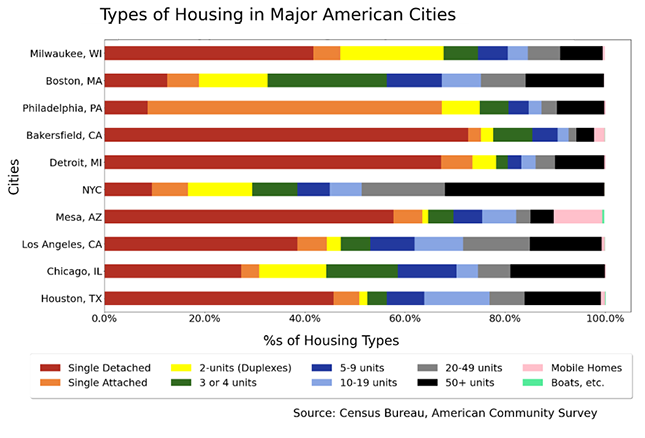 Milwaukee’s duplex housing is ancestral. Such houses are “primarily associated with the working-class neighborhoods built between 1890 and 1930,” which “served the housing needs of Milwaukee’s skilled industrial workers and their families particularly well,” notes the University of Wisconsin’s Encyclopedia of Milwaukee. When compared with the 50 most populous cities in the U.S., Milwaukee doesn’t resemble the dense, mostly eastern cities with several varieties of housing. It looks more like those western cities that were built (or rebuilt) for cars—except that it has far more duplexes.

Zoning restrictions, however, have impeded duplex construction even in Milwaukee. Duplexes proliferated between 1890 and 1930, just before the onset of residential zoning. Whether a city can mix duplexes into its housing market is a question of repealing laws that make building certain modest types of homes illegal. The duplex capital of America is struggling with housing supply, yet a tried-and-tested solution lines the city’s streets. Cities hoping to bring down housing costs should consider the “light-touch density” that duplexes and similar housing types provide.

Noah Diekemper is a senior research analyst at the Wisconsin Institute for Law and Liberty.

Christopher S. Elmendorf, Clayton Nall, Stan Oklobdzija A new study shows that people want lower housing prices but not the zoning policies that could deliver them.
from the magazine