A Generational Threat to Free Expression

The clash between socialist and liberal economics defined the late twentieth century, and this century brings a cultural version of that struggle. Today’s culture wars pit advocates of equal outcomes and special protection for identity groups against defenders of due process, equal treatment, scientific reason, and free speech. Our political map is taking shape around this new divide between what I will call cultural socialism and cultural liberalism.

Cultural socialism, which values equal results and harm prevention for identity groups over individual rights, has inspired race-based pedagogies and harsh punishments for controversial speech. Rooted in the idea that historically marginalized groups are sacred, this view is no passing fad. Letters, associations, universities, and media defending free speech notwithstanding, the young adherents of cultural socialism are steadily overturning the liberal ethos of the adult world.

Survey data from my new Manhattan Institute report, “The Politics of the Culture Wars in Contemporary America,” show the scale of the challenge. While the American public leans two-to-one in favor of cultural liberalism, a majority of Americans under 30 incline toward cultural socialism. For instance, while 65 percent of Americans over 55 oppose Google’s decision to fire James Damore for having questioned the firm’s training on gender equity, those under 30 support the firing by a 59–41 margin. Similar gaps separate young and old people on similar instances of cancel culture, such as the oustings of Gina Carano (an actor fired from Star Wars for social media posts) and Brendan Eich (the former CEO of Mozilla forced out in 2014 for opposing gay marriage in 2008). Only part of this disparity stems from the fact that young people lean left: centrist young people, for instance, support Google over Damore by a 61–39 margin, while centrists over 55 support Damore over Google 58–42.

On the use of critical race theory in school, a similar divide emerges. Eight in ten people over age 55 oppose teaching schoolchildren that the United States was founded on racism and remains systemically racist, or that the country and their homes were built on stolen land. A slight majority of young people support teaching these notions. While opposition to critical race theory in schools can take an illiberal form, compulsory CRT violates two key liberal principles: first, that pupils in a classroom or employees in a diversity training session should not be forced to agree with ideas they don’t believe in; and second, that people should not be treated differently because of their race. Recent attempts by state governments to limit whites’ access to Covid-19 medication are another manifestation of this tendency.

Another front in the culture war is censorship of speech, usually justified on grounds that such speech would inflict psychological harm on minorities and that power should be redistributed to “marginalized groups.” Activists pushing for such censorship organize online flash mobs and pressure campaigns, wielding accusations of racism, homophobia, or transphobia to ruin a person’s reputation and have them fired from their position. The problem is especially acute in higher education: the number of academics targeted for cancellation has exploded in recent years.

Young people are especially afraid of cancel culture. Forty-five percent of employees under 30 worry about losing their jobs because “someone misunderstands something you have said or done, takes it out of context, or posts something from your past online.” Just 29 percent of those over 55 have the same worry.

This fear, however, doesn’t appear to lead young people to oppose cancel culture. Most millennials and members of Generation Z are not cultural liberals too scared to say what they truly believe. Instead, many privilege cultural equality over freedom. By a 48–27 margin, respondents under 30 agree that “My fear of losing my job or reputation due to something I said or posted online is a justified price to pay to protect historically disadvantaged groups.” Those over 50, by contrast, disagree by a 51–17 margin. Younger age brackets are both more fearful of cancel culture and more supportive of it than are older age groups. 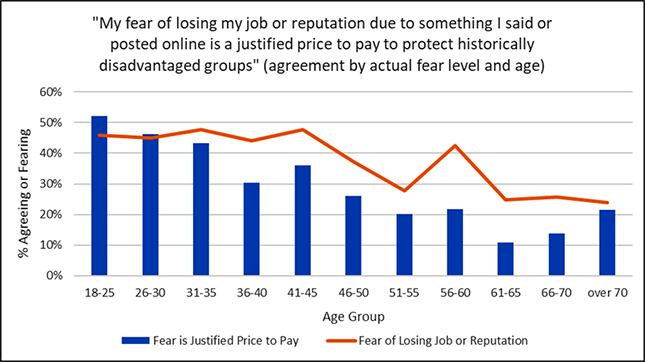 The age divide extends to more general questions. When asked, “Thinking about political correctness, are you generally in favor of it (it protects against discrimination), or against it (it stifles freedom of speech)?” respondents under 30 endorsed political correctness by a 50–29 margin. Those over 50 opposed it, 47–30. 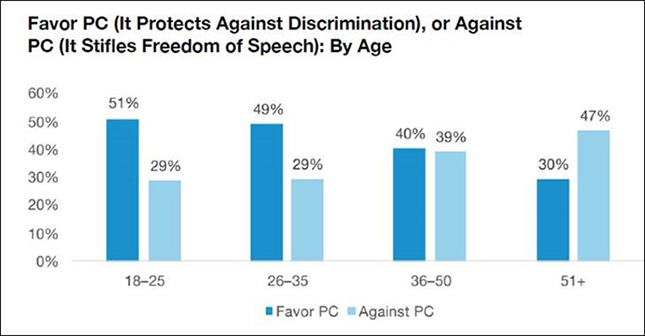 All this echoes what is happening on college campuses, where these trends ultimately originate. In a 2021 report for the Center for the Study of Partisanship and Ideology, I found that American, Canadian, and British academics under 35 were twice as likely as those over 55 to support campaigns to fire academics who report controversial findings that might offend minorities. A recent study found that seven in ten students say professors should be reported if they say something offensive. The Foundation for Individual Rights in Education’s two-wave sample of 57,000 undergraduates shows that nearly eight in ten students would oppose their school allowing a speaker onto campus who argues that Black Lives Matter is a hate group or that transgenderism is a mental disorder.

Think the progressive illiberalism of young people is just a phase? Think again. Examining trends in support for free speech in the General Social Survey, which has run since 1972, political scientists Dennis Chong, Jack Citrin, and Morris Levy find that young people today are far less tolerant of forms of speech that affect identity groups than were young people in the past. “In a stunning reversal,” they write, those on the left “are now consistently less tolerant than conservatives of a wide range of controversial speech about racial, gender, and religious identities.”

America still has two cultural liberals for every cultural socialist. Questions of cancel culture and CRT split Democrats and unite Republicans, putting pressure on both parties to resist cultural socialism. Twenty percent of Democrats, one-third of independents, and nearly half of Republican voters now rank culture-war issues as a top concern, my survey finds. The classical liberal inheritance that underpins our legal system does not live in the hearts of younger generations because it has not been brought to life in stories, film, or education. We urgently need to revive this lost tradition—but the hour is late.

Eric Kaufmann is an adjunct fellow at the Manhattan Institute and a professor of politics at Birkbeck College, University of London, and is affiliated with the Center for the Study of Partisanship and Ideology.

The Ghost of Jim Crow

The Ghost of Jim Crow

Yes, Critical Race Theory Is Being Taught in Schools

The Future of the Culture War