A Brief History of Inflation

Last month, the Federal Reserve increased its targeted federal-funds rate by 0.25 percent to counter rising inflation in the U.S. economy, while signaling that this was the first step in a month-to-month sequence of rising rates that could extend into next year. Fed chairman Jerome Powell hopes that modest increases of this kind will slow surging inflation, currently running at between 6 percent and 8 percent per year, the highest since 1981, when the Consumer Price Index rose by 10.1 percent. Even with this increase, the federal-funds rate remains low by historical standards: between 0.25 percent and 0.50 percent.

If modest rate hikes don’t work as hoped, then the central bank may have to continue rate increases until they exceed the rate of inflation—which would undoubtedly slow economic growth and perhaps induce a recession while causing distress in the stock and bond markets. That has happened before. In the late 1970s and early 1980s, then-chairman Paul Volcker raised the federal-funds rate to 17 percent to rein in out-of-control inflation. Those policies led to a deep recession in 1982, but they brought the price level under control and set the stage for a 40-year period of declining inflation and interest rates, along with a long bull market in stocks and bonds. As Powell and his colleagues work to reach a soft landing, the looming question is whether their new policy signals the end of an era of declining interest rates and inflation that began in the early 1980s.

Interest rates in the U.S. economy tend to follow extended historical patterns, and a 40-year period of declining rates is not all that unusual when one takes the long view. Alexander Hamilton’s plan to fund the federal debt in 1790 called for a 6 percent rate of interest on ten-year government bonds, which was thought to be the prevailing rate of interest at the time. Nevertheless, interest rates generally declined throughout the nineteenth century (though they rose during the War of 1812 and the Civil War) and reached a low of around 4 percent in 1898. Rates increased again to around 6 percent by 1920, owing in part to World War I, at which point they embarked on a long decline that lasted until 1946, when they averaged less than 3 percent. Rates steadily increased for a full generation thereafter until interest on the ten-year bond peaked at 15 percent in 1981, a level previously unheard of in U.S. financial history. That peak was followed by 40 years of broadly declining rates. The chart below traces the yield on the ten-year bond from 1961 to today:

The same pattern holds true for the federal-funds rate, the target interest rate set by the Federal Reserve for overnight borrowing and lending among commercial banks. In 1954, it was less than 1 percent, but it rose steadily through 1969, when it reached almost 9 percent. Inflation was also increasing, buoyed by Great Society spending and the Vietnam War. The federal-funds rate bounced up and down through the 1970s, reaching a low of 3.3 percent in 1972 and a high of 12.9 percent in the midst of the recession and inflation of 1974. It then gradually rose through the late 1970s and into the early 1980s, reaching a high of 19 percent in August 1981, with a steep recession soon following. The secular decline in rates began at that time, declining to close to zero from 2008 through 2016 (as the Fed responded to the financial crisis) and again during the pandemic.

The historical pattern on inflation runs parallel to that of interest rates. This series, compiled by the St. Louis Federal Reserve Bank, measures change in the CPI for urban consumers for both headline inflation (all consumer items) and core inflation (consumer items, except food and energy prices) from 1960 to 2022. During the first half of the 1960s, inflation remained low and stable, with increases in both core and headline inflation of between 1 percent and 2 percent per year. That pattern allowed the Fed to maintain a stable interest-rate policy, notwithstanding President John F. Kennedy’s experiments with Keynesian fiscal policies. Inflation then increased fourfold, from 1.5 percent in 1966 to 6.5 percent in 1970, owing to spending on President Lyndon B. Johnson’s Great Society programs and the war in Vietnam. The rise in inflation led to a steady rise in interest rates as well, along with President Richard Nixon’s ill-advised steps to control rising prices through wage and price controls. Those controls did not work, except perhaps from a short-term political point of view. Once they were removed, inflation surged again, with the headline figure reaching 12.5 percent in 1975. The embargo imposed in 1973 by several oil-producing countries contributed to the surge in prices, but the CPI for core inflation still reached 11.8 percent in early 1975. Like today, inflation then was not driven solely by oil prices.

Those were years of unstable fiscal and monetary policy. Inflation stabilized in the late 1970s at around 6 percent per year (still high by postwar standards), before rising to 13.6 percent in early 1980. Fed chairman Volcker began his campaign in 1979 and 1980 to reduce inflation with tight monetary policy and rising interest rates, which played a role in President Jimmy Carter’s defeat in the 1980 election. Those policies also contributed greatly to the steep recession of 1982–83. But those policies quickly and finally brought inflation down, reducing it to between 3 percent and 5 percent per year from 1983 until 1990. It declined further still, to 2.5 percent per year, by the late 1990s. That era has continued for more than two decades, with core inflation hovering around 2 percent per year until 2020. But headline inflation this year is running at close to 8 percent and core inflation at more than 6 percent.

The four-decade period of declining inflation and interest rates has rewarded investors, entrepreneurs, homeowners, and consumers. It stands in sharp contrast to the 1965–1980 period, when erratic and ineffective policies were the norm. Yet the U.S. has flirted with some of those former policies, with federal deficits running at $3 trillion per year in 2020 and 2021 and the central bank seemingly behind the monetary-policy curve. The Federal Reserve increased the money supply by 19 percent in 2020 and 16 percent in 2021 in response to the Covid-19 pandemic, increases that far out-stripped real economic growth. Meantime, Congress passed a series of massive, trillion-dollar relief bills. With such policies in place, it should come as no surprise that inflation is increasing, with interest rates soon to follow.

The end of a policy era may also signal the end of a historic bull market in stocks. In 1982, few expected the swift turnaround that took place in the stock markets at that time. Fewer still expected the historic rise in share prices to continue through almost four decades until the present day.

The charts below illustrate the exponential growth of the stock market over these decades, as measured by the Dow Jones Industrial Average of 30 stocks and the Wilshire 5000 Price Index (a broader measure of stock prices). Stocks (measured by the DJIA) advanced steadily through the 1950s and into the 1960s, reaching nearly 1,000 on the Dow in 1966, but did little thereafter due to the rising inflation and interest rates of that period. As of August 1982, the index stood at 808, at which time it began its long advance: doubling by 1986, doubling again by 1993, and eventually increasing 45-fold by 2021, when the index reached 36,000. The Wilshire index of the broader stock market illustrates the same pattern of growth: mostly flat from 1970 to mid-1982, it then began a long advance, doubling by 1986, advancing tenfold by 2000, and eventually reaching a high of 49,000 in 2021—another 45-fold increase. The market capitalization of U.S. stocks in 1979 was about $1 trillion (in current dollars) yet was $41 trillion in 2020. 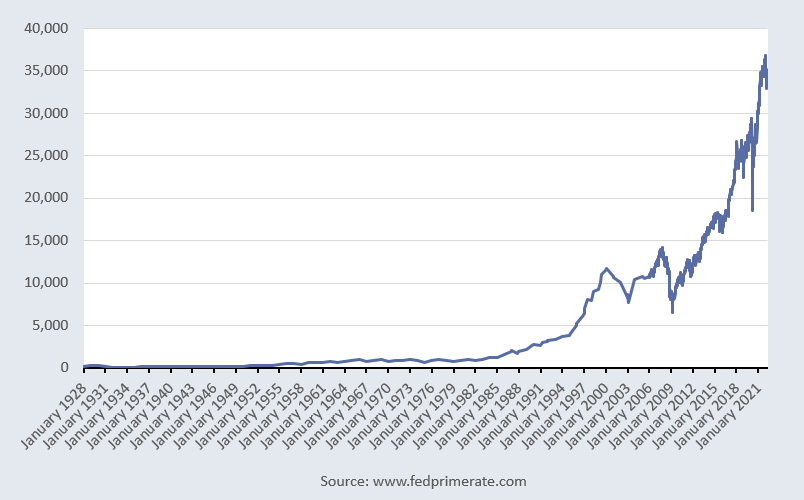 It is too soon to say that this era is now ending. Nevertheless, the current situation bears more than a passing resemblance to the price and interest-rate instability that defined the 1970s. Then, as now, it was thought that inflation could be tamed by half-measures that would not disrupt the economy, even though rising prices were provoked in the first place by extreme fiscal and monetary policies of the kind that have always had inflationary effects.

Some important differences exist between the 1970s and the 2020s, yet many of these are cause for pessimism. The federal debt is much larger today than it was in 1979, so government will have more difficulty in the future servicing its debt while maintaining other expensive programs. The U.S. economy is growing at a slower rate than in the 1970s. Demographic changes mean that close to half the population depends on government support in one way or another, including government employment, welfare, and old-age assistance, compared with roughly 20 percent in the 1970s—leaving the federal government little room to cut budgets. And the political situation today is far more polarized. For all these reasons, rising inflation and interest rates, leading to a recession and falling stock and bond markets, stand to cause even greater conflict and distemper today than they did four decades ago.

By the end of this year, we’ll find out whether modest measures will reduce inflation—or whether we are in for an extended period of rising prices and interest rates, with accompanying economic instability. Whenever the current era ends, as it is bound to do sooner or later, Americans will undoubtedly look back upon it as a golden age of sorts, and wonder if, and how, it might be restored.

James Piereson is a senior fellow at the Manhattan Institute.

James Piereson, Naomi Schaefer Riley A recent Fed report suggests that the college debt problem isn’t as bad as we think—though it might feel more burdensome to those not satisfied with their educations.
eye on the news

Allison Schrager The choice between inflation or recession is a false one—we must deal with the first to prevent both from growing worse.
eye on the news

Theodore Dalrymple Shortages of the condiment in France lead to suspicion and rumor, illustrating a timeless human tendency.
Saved!
Close