The U.S. economy added 372,000 new jobs in June, and another 528,000 in July, bringing the unemployment rate down to 3.5 percent. Over the past 12 months, average hourly earnings increased by 5.2 percent. Yet overall economic growth remains low, with real GDP contracting at an annual rate of 0.9 percent in the second quarter. Though the U.S economy has shrunk for two consecutive quarters, the robust labor market has observers split over whether the economy is actually in recession.

What explains the combination of a robust labor market and a slow-growing economy? Part of the answer lies in long-term developments in the U.S. labor force.

Start with recent trends. The economy grew by 5.7 percent in 2021, the largest annual gain since the 1980s, while adding 6.1 million new jobs. But those gains represented bounce-backs from unprecedented pandemic losses in 2020, when the economy contracted by 3.4 percent and some 9 million jobs disappeared. When the GDP rates from those two years are combined and averaged, the annual growth rate over that period comes in at just over 2 percent—close to the 2.3 percent rate in 2019 before the Covid lockdowns began. 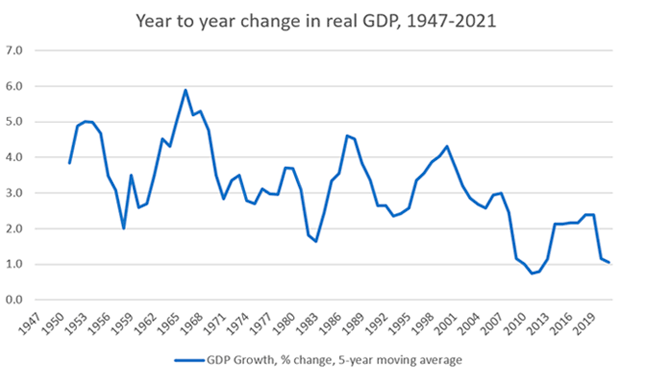 A growth rate of around 2 percent per year, or less than half the rate of the 1960s, appears to be the new normal. If the economy had kept growing over the decades at those earlier rates, then real GDP in 2022 would be more than double its current level. Lackluster growth goes a long way to explain income inequality, stagnant wages, and perhaps even the sour mood of the American electorate. 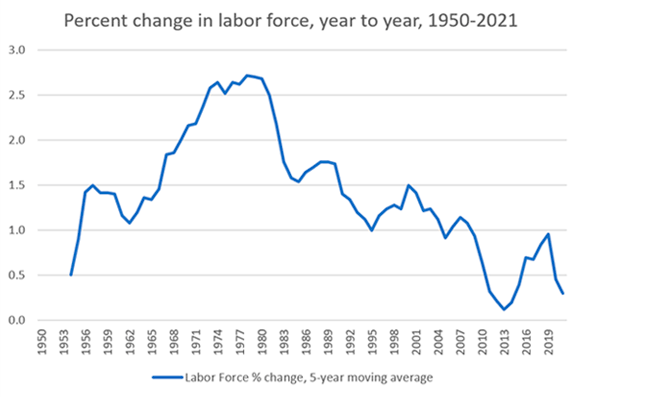 The labor-force participation rate—the percentage of the labor force working or seeking work—has also declined, from 67 percent in the late 1990s to 62 percent today. (With the current labor force at around 164 million workers, a 5 percent decline in workforce participation represents about 8 million jobs.) Part of this decline reflects demographic changes, as the baby-boom generation has aged and the share of workers in prime age has decreased. Part of it reflects fewer men seeking work, from 88 percent in 1950 to 70 percent today. And part of it seems to indicate that increased participation among women in that era, which undoubtedly boosted the overall growth rate from the 1960s through the 1990s, has run its course.

In any case, these two factors—slowing growth in the labor force combined with a declining participation rate—help contextualize lagging economic growth amid low unemployment. And the low unemployment rate obscures the substantial decline in labor-force participation in recent years, as dropouts from the work force are not included in the unemployment figures.

America faces a growth challenge for which there are no easy solutions. More debt and artificially low interest rates would be shortsighted responses. Rising wages should draw more workers into the labor market, a rational immigration policy might bring skilled workers from abroad into the labor force, new information technologies may improve worker productivity, and supply-side reforms might remove some obstacles to development. But some instead favor new taxes on businesses and capital gains, which will discourage investment in productivity-enhancing technologies. Lacking workable solutions, Americans may have to adjust to a future of slow economic growth—with all that implies for intergenerational progress, American strength abroad, and political conflict at home.

James Piereson is a senior fellow at the Manhattan Institute.

James Piereson, Naomi Schaefer Riley Pablo Eisenberg pushed the world of big philanthropy to the fringes of the Left—at the price of turning much of the field into an adjunct of government.
eye on the news

James Piereson, Naomi Schaefer Riley Philanthropic foundations will feel the squeeze in a bear market—especially when they have been making ill-advised or politically driven investment decisions.
eye on the news

James Piereson, Naomi Schaefer Riley A recent Fed report suggests that the college debt problem isn’t as bad as we think—though it might feel more burdensome to those not satisfied with their educations.
More on