Last night, as I scrolled through my newsfeed on Facebook, I saw multiple posts referring to the shooting of 13-year-old Adam Toledo by Chicago police officer Eric Stillman, video (warning: graphic) of which had just been released by the city’s Civilian Office of Police Accountability.

All the posts linked to news stories with headlines emphasizing one detail: at the moment Toledo was struck by the officer’s gunfire, his hands were raised and appeared to be empty. A sampling of the news headlines:

BuzzFeed News: “Video Shows 13-Year-Old Adam Toledo Had His Hands Up When A Police Officer Fatally Shot Him”

NBC 5 Chicago: “Attorney: Adam Toledo Did Not Have Gun In His Hand When He Was Shot By Chicago Police”

The implication from these headlines is clear: the boy was unarmed and raising his hands in surrender when he was shot—ergo, this was a bad shooting.

Those were just the news pieces. The commentary was more explicit. In The Hill, a piece entitled “Lawmakers demand justice for Adam Toledo: ‘His hands were up. He was unarmed’” quotes, among many other Democratic lawmakers, California congresswoman Karen Bass, who tweeted, “Adam Toledo was 13 years old. Those responsible for taking the rest of his life away from him must be held accountable.” A local community organizer told an audience on Democracy Now! that “There is no other way to describe what we saw in the video, as a cold-blooded murder.” During a press conference, the attorney representing Toledo’s family said, “If you’re shooting an unarmed child with his hands in the air, it is an assassination.” The Los Angeles Times quoted “neighbors” in Little Village, where the shooting took place, who referred to the shooting as “an execution.”

New York City mayoral hopeful Andrew Yang distilled the relevant facts to just three: “He was 13. He was unarmed. His hands were up.” Law professor Paul Butler (with whom I recently debated police reform) asked, on MSNBC, “Where is the bottom?”—suggesting that this shooting was clearly wrong. Butler went on to note that the officer fired his weapon “within 20 seconds of leaving his car.” Similarly, MSNBC’s Joy Reid said of the police in this case, “They didn’t wait ten seconds before opening up on him like it was a drive-by.” What Butler and Reid don’t seem to understand is that it takes a lot less than ten seconds for an armed suspect to shoot a police officer.

Such inflammatory comments have become par for the course for modern media. A close analysis of the available video evidence also shows just how detached from reality these comments are.

The video is extremely difficult to watch. It is awful to watch the fear set in on Toledo’s face as he seemed to realize he would die. Children are not supposed to die—especially not in a dark alley at 2:30 in the morning, with what officers on-scene described as a sucking chest wound.

The video clearly depicts a tragedy—but it is far from clear that it depicts a crime, let alone one motivated by racial animus. Consider four freeze-frames from the body-camera footage of Officer Stillman.

In the first (pictured below), Toledo is seen holding what appears to be a gun in his right hand. Notice the timestamp, which shows the second-marker at 39 seconds. At this point, Toledo, who had led Officer Stillman on a foot-chase through the dark alley, had come to a stop and was beginning to orient his body toward Stillman. 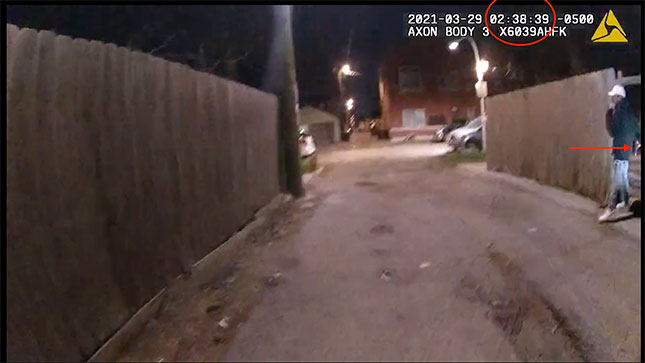 The second freeze-frame (pictured below) shows Toledo as he turned to his left toward the officer, at which point both the gun and his right hand were positioned behind Toledo’s body, hidden from the officer’s view. This seems to be the point at which Toledo began to toss the gun behind the wooden fence, which the officer could not have seen through. Again, notice the second-marker on the time stamp, which is still at 39 seconds. The time that has elapsed between these two freeze frames is in the range of a few-hundred milliseconds. Notice also how blurry both the arm and hand of officer Stillman are, reminding us that, while the media has fixated on a single freeze-frame we can all pore over while sitting still in well-lit rooms, the picture before Stillman was dark and in motion. 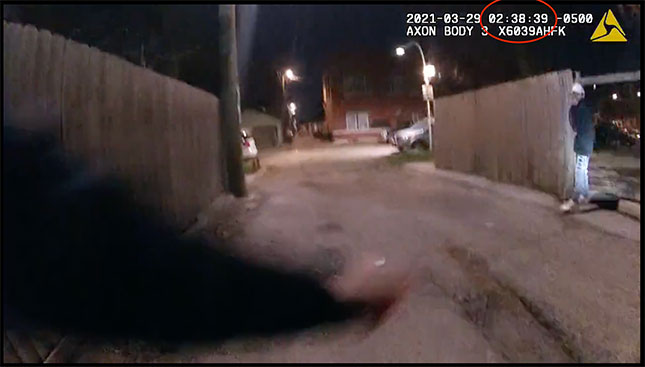 The next frame (see below) shows that Toledo is still turning toward the officer, while his right hand (and the gun) are still hidden from view. Notice how blurry Toledo is in the frame, indicating that he and/or Stillman are still in motion. And take note of the second-marker, which is still at just 39 seconds. 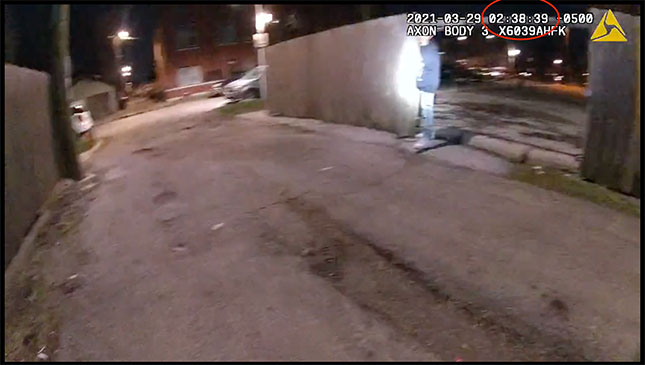 The final freeze-frame captures the moment Officer Stillman fired his weapon—as Toledo was completing his turn to face Stillman, while raising his now-empty hands. This is the point at which journalists and commentators have decided to both start and end their analysis of this case. 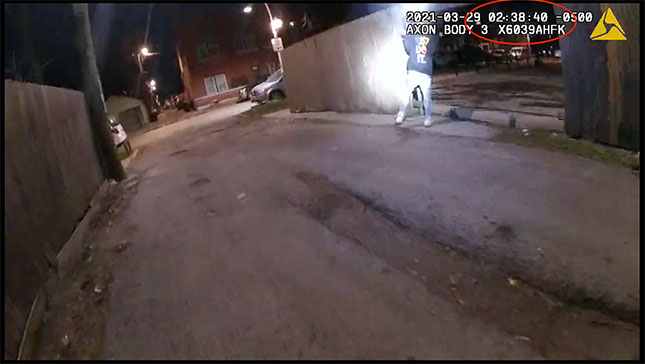 Notice, again, the time stamp, which shows the second-marker at 40 seconds.

Sometimes, police officers simply don’t have the luxury of even ten seconds to assess a situation. Consider another disturbing video (released just five days ago) which depicts the murder of New Mexico State Police Officer Darian Jarrott. While this incident got far less attention than other recent officer-involved shootings, it shows just how quickly a suspect’s hands can go from empty to armed.

Less than one second elapsed between Toledo beginning his turn toward the officer with a gun in his right hand, and the officer firing a single shot from his service weapon. And these were not ideal conditions in which to make a split-second decision: it was dark, and Stillman’s heart rate and adrenaline levels were likely elevated due to the foot chase. Furthermore, Stillman and his partner had encountered Toledo and another man, who was taken into custody at the scene, because they were responding to a ShotSpotter alert. ShotSpotter is a system of sensors that detects gunfire in real-time and provides that information to nearby police, so that they can respond to shootings more quickly. When Stillman and his partner arrived, there were only two people in sight. One of them took off with a gun in his hand.

Was it really so unreasonable for Stillman to have genuinely perceived a risk to his own life when he decided to pull the trigger? I don’t think so, but I’m certain of one thing: that’s not a question you can answer based on a single, out-of-context freeze-frame. Those who attempt to do so show their extreme ignorance of the realities of dynamic situations like these. Such hasty conclusions also reinforce cops’ perception, which I suspect is becoming even more widespread, that they should not expect fair treatment if they have the misfortune of being involved in a use-of-force incident. As that perception deepens among cops, we run the risk of more and more officers prioritizing risk-minimization over being proactive. As the past year of escalating crime has shown us, that’s a recipe for more tragedy.

The Utility of Incarceration

Rafael A. Mangual Public-safety advocates can’t afford to ignore the link between falling prison and jail populations and rising violent crime.
eye on the news

What George Soros Gets Wrong

Rafael A. Mangual “Progressive” approaches to law enforcement carry a steep price for the victims of violent crime.
More on

Diversity Up, Public Safety Down

Noel Yaxley London’s new police commissioner touts increased female representation on the force, but crime in the city is rising.
eye on the news

Theodore Dalrymple Whether they realize it or not, criminal-justice liberals enable the dangers they decry.
Saved!
Close