The End of Fatalism

Globalization has changed the world over the last 30 years, but its power is not merely economic. A wave of freedom is spreading that knows no borders. Sometimes it carries the day (the Velvet Revolution); sometimes it runs up against political-military machines, either secular (Tiananmen, 1989) or religious (Iran, 2009). No matter. A globalized younger generation will not silence its cries (often digital): “Back off!” “Get out of our way!” “Give us some space!” Tunisian passion quickly rattled the Egyptian fortress, and soon much of the Middle East felt the impact in some form—including, most recently, Syria. A spiritual atomic bomb is shaking up ancestral forms of oppression that now appear voluntary—and thus open to voluntary destruction.

Beyond our admiration for the crowds we see overcoming their fears, we should reflect on the element of surprise that has left established powers at a loss. Consider two old prejudices, both dating to the end of the Cold War: the idea that the polarity between East and West had been replaced by a conflict among “civilizations”; and the conviction that the Cold War would be followed by the peace of economic rationalism (see “The Dawn of Politics”). The Arab implosions—which expose the incoherence of such categories as “Arab world” and “Islamic civilization”—make clear the inadequacies of these prejudices. How many times have we heard that freedom and democracy mean nothing to the “Arab street” as long as the Israeli-Palestinian conflict remains unresolved? To refuse to defer the question bvhhas until now been enough, in universities and right-thinking circles, to brand a person as indecently Eurocentric, simplistically hung up on human rights, or even . . . Zionist. This fatalism no longer applies to the Maghreb or to the Middle East.

Whatever may come, let us greet the Arab upheaval with “sympathetic aspiration that comes close to enthusiasm,” as Kant spoke of the French Revolution, though he disapproved of its many excesses. There is no reason to bemoan the fall of a tyrant. I enjoyed seeing the end of Communist satraps in Europe and in the East, as well as the falls of Salazar and Franco and Saddam Hussein; why would I mourn the departures of Ben Ali and Mubarak?

But what happens next is anybody’s guess. Freedom contains the power of opposites; it embraces, as Friedrich Schelling observed, “the deepest abyss and the highest heaven.” Europe’s historical itinerary shows us that revolution can lead anywhere: to a republic’s common good or to terror, conquest, and war. At the same moment that Mubarak was stepping down in Cairo, Tehran celebrated the 32nd anniversary of its Islamic Revolution with a festival featuring hangings and savagely tortured bodies. Egypt is not—God forbid—Khomenei’s Iran, nor is it Lenin’s Russia, nor Germany under National Socialism. It will become whatever it is made to be—by its youth eager to breathe free, by its Muslim Brotherhood, by its hesitant and disassembled army, and by its rich and poor, still separated by light-years.

Forty percent of Egyptians live in poverty, and over 30 percent are illiterate. According to Pew polls from 2010, 82 percent of Muslim Egyptians desire the enforcement of sharia and the stoning of adulterers, 77 percent have no problem with cutting off thieves’ hands, and 84 percent favor the death penalty for apostates. That’s enough to temper any rosy forecasts.

On the other hand, it took France two centuries to make the transition from repeated revolutions to a democratic and secular republic. It might take just as long for the Russians and the Chinese, if they ever complete the journey. Even the United States, which sometimes sees itself as having reached political felicity in ten years, actually struggled for much longer, going through a terrible civil war and a long struggle for civil rights—two full centuries of trampling out the vintage of the grapes of wrath.

“Revolution” and “freedom” don’t always mean democracy, respect for minorities, sexual equality, and good relations with neighbors. Such goods are gained as part of an ongoing struggle. Let us welcome the Arab revolutions, for they shatter the fatalists’ illusions. But let us not flatter them or delude ourselves: great risks and even worse dangers lie ahead. We know from our own history that the future holds no guarantees.

André Glucksmann is a French philosopher; his article was translated by Alexis Cornel. 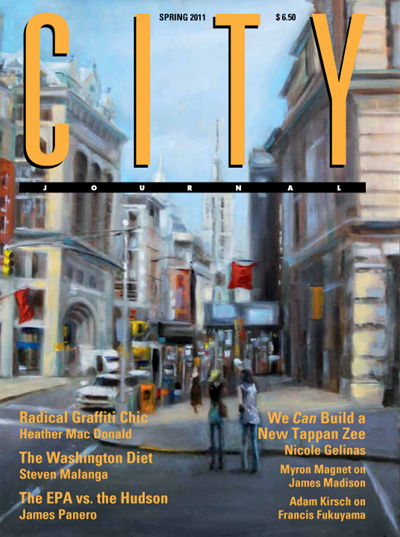 “Polemos Is the Father of All Things”

André Glucksmann, Monique Canto-Sperber A dialogue on war and morality
from the magazine

André Glucksmann The force that brought down the Twin Towers hasn’t been defeated.
eye on the news

Guilty of Being Right

André Glucksmann Mikhail Khodorkovsky is being punished for the Russian regime’s sins.
More on