Heading the list of individuals and companies reportedly under federal scrutiny is Joseph Percoco, the governor’s executive deputy secretary before leaving state government in January. When he left the state payroll for the first time, to run the governor’s 2014 reelection campaign, Percoco received at least $70,000 in consulting fees from two firms involved in state-subsidized projects, according to his financial-disclosure filing. Todd Howe, a Washington lobbyist who has worked as a senior aide for both Cuomo (in the 1990s, when the current governor was federal Housing and Urban Development secretary) and his father, the late former governor Mario Cuomo, is reportedly another Bharara target.

With federal subpoenas flying, Cuomo’s office said that it had tapped “independent investigator” Bart M. Schwartz—a Manhattan-based lawyer and top prosecutor under one of Bharara’s predecessors, Rudolph Giuliani—to conduct an internal review of the Buffalo Billion program. Explaining how he expected to proceed, Schwartz began with a nod to the obvious: “The state of New York awards significant funding and regulatory approvals to private sector companies,” he said.

It sure does. The “significant funding” behind Cuomo’s economic-development programs now runs into the billions, and the governor’s secretive and centrally controlling approach breeds more opportunity for political favoritism. Quite apart from whether Bharara uncovers any criminal wrongdoing, the Buffalo Billion project is highly questionable both as a matter of public policy and as a business proposition.

Despite criticism from economists on the left and right, most states offer tax breaks, low-interest loans, grants, and other subsidies to companies they hope to attract and retain. Cuomo’s biggest state-subsidized projects feature a uniquely close intertwining of government and corporate interests—complete with state ownership of the means of production. The linchpin of the state’s Buffalo initiative is $750 million in cash, tax credits, and other assistance for a 1.2 million-square-foot “Gigafactory” for SolarCity, America’s leading solar-panel installer.

With average annual snowfall totals of seven feet, and just 54 fully sunny days per year, Buffalo is an unlikely hub for a renewable-energy revolution. (Because of the seasonal snow load, the 23-acre roof of what is planned to be the world’s largest solar-panel factory won’t sport a single solar panel, project engineers say.) Cuomo overcame Buffalo’s meteorological disadvantage with an offer too good for any firm to refuse. The development site, once occupied by a steel factory demolished years ago, was taken over by SUNY Polytechnic—qualifying it as one of Cuomo’s START-UP NY zones, which means that the SolarCity operation won’t pay state or local taxes. A nonprofit subsidiary of SUNY Poly is building and equipping the Gigafactory, which the state will lease to SolarCity. This arrangement gives the governor’s office ultimate control over every aspect of a project that, under a more typical, government-driven economic-development model, would be owned and managed by SolarCity itself.

As first reported by Investigative Post, a nonprofit Buffalo news operation, SUNY Poly’s initial request for proposals to build the factory was tailored specifically to favor LPCiminelli, a developer whose principals are among Cuomo’s biggest Buffalo-area campaign contributors. LPCiminelli won the contract when it was re-bid with fewer restrictions; but the selection process is among the aspects of the SolarCity project that federal prosecutors are investigating. Reflecting another Cuomo political priority, the project also is covered by a state-imposed project-labor agreement that limits all construction-related work at the site—even deliveries—to trade-union members.

Aside from the governor, the key state player in the SolarCity project has been Alain Kaloyeros, SUNY Poly’s chief executive. Over the past quarter-century, Kaloyeros has built a public-private tech empire based at what is now a 1.3-million-square-foot “NanoTech Megaplex” adjacent to the SUNY Albany campus. Hired as a physics professor by SUNY Albany in 1988, the Lebanese-born Kaloyeros masterminded the creation and expansion of a nanoscience program that by the mid-1990s had relocated to its own new building on campus. Enterprising and flashy (for a time, he drove a Ferrari with the license plate “DR NANO”), Kaloyeros shrewdly sold state politicos on his technical vision. His steady expansion of the nanoscience college and public-private research facilities at SUNY Albany, ultimately spun off as the independent SUNY Poly, earned bipartisan support and generous financial backing from every New York governor starting with Mario Cuomo. The Albany campus now hosts 3,500 scientists, researchers, engineers, students, faculty, and staff, plus a tech-oriented public high school.

New York’s highest-paid government employee, with total salary of $1.1 million last year, Kaloyeros has parlayed hundreds of millions of dollars in state government grants and capital investments into R&D partnerships with leading tech companies, including IBM, Intel, and Samsung. Along the way, he pioneered the technique of creating a college-controlled nonprofit real-estate subsidiary to build and manage state-subsidized research, manufacturing, and office facilities shared with private corporate tenants. Based on that model, SUNY Poly—while hardly a household name on the level of MIT, Berkeley, or Stanford—now describes itself as “the world’s most advanced, university-driven research enterprise.”

Under Cuomo, Kaloyeros’s institutional footprint has been extended across upstate, to include an LED lighting plant and film production “hub” in Syracuse, a cancer-drug manufacturer in Dunkirk, and a computer-chip commercialization center in Utica. In each case, private corporations were enticed by production plants owned, built, and at least partially equipped by taxpayers, through SUNY Poly and its subsidiaries. Bloomberg News estimates that Kaloyeros now oversees $43 billion in tech investments, including private money leveraged by state funds.

New York’s all-time record subsidy for a single private-development project remains the $1.3 billion in capital-infrastructure grants and tax incentives that Governor George Pataki used a decade ago to lure a $4.2 billion GlobalFoundries semiconductor-manufacturing plant to a corporate park carved out of a forest in Saratoga County, just north of Albany. But by contrast with Cuomo’s SUNY Poly-managed megaprojects, the state had no ownership interest in the GlobalFoundries factory site, buildings, or equipment.

The Cuomo-Kaloyeros model has been publicly questioned at least once from within the highest levels of the official economic-development apparatus. When state funding for the Syracuse LED plant was discussed earlier this year at a board meeting of the Empire State Development Corporation (ESDC), board member Robert Dyson—an unpaid, independent director who runs a private investment firm—wondered aloud: “Do we want to be property owners?” As reported in Politico New York, the Cuomo-appointed ESDC president, Howard Zemsky, said in response that state ownership of plant assets is “a hedge for the public investment because, just by definition these companies and these industries are very changeable.” He added: “Some of them can grow dynamically and in ways nobody could have imagined and others could be hit, potentially, by unexpected turbulence.” In other words, since they’re not just subsidizing but also owning tech plants, taxpayers absorb even more of the risk associated with capital investments in this volatile sector.

SUNY Poly’s gleaming, futuristic campus on the outskirts of Albany makes an impressive sight—as if by design, it’s the first thing that eastbound drivers see when they take New York Thruway Exit 24 toward the State Capitol. But the $24 billion complex is also tax-exempt, generating a token $500,000 annual contribution to the $181 million city of Albany budget. Cuomo holds up the Nanotech Megaplex as a model for reviving struggling communities across upstate New York, but the operation has done little (directly) to boost the fiscal fortunes of the municipality within which it is located.

In fact, Albany is virtually broke, dependent on a $12.5 million state bailout to balance its budget this year. Given its sky-high property-taxes, Albany—like most of its upstate counterparts—struggles to attract private, market-rate real-estate development. It didn’t help a few years ago when Kaloyeros lured EYP Architecture & Engineering, one of the largest remaining private employers still occupying taxable space in downtown Albany, to his new office complex at SUNY Poly. 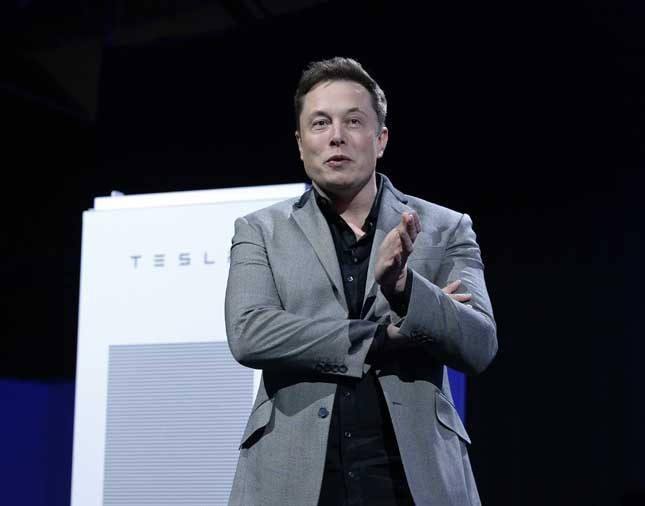 Meanwhile, in Buffalo, New York taxpayers effectively have become business partners with Elon Musk, the tycoon who chairs SolarCity but is probably best known as chief executive and main shareholder in SpaceX, which builds rockets, and of Tesla Motors, maker of much-hyped electric cars. As the Wall Street Journal recently reported, Musk has engaged in some decidedly “unconventional” financial-engineering tactics to keep his business empire afloat. For example, SpaceX has been the biggest buyer of $214 million in bonds issued by SolarCity to finance its aggressive expansion—and Musk has taken out nearly a half-billion dollars in personal credit lines, secured by his shares in SolarCity and Tesla stock, to buy shares of those two companies when they needed capital.

“Few top executives use their shares as collateral for personal loans because it can be risky to other shareholders and also raises concerns that the executive’s personal interests could conflict with the company’s interests,” the Journal pointed out. SolarCity just raised another $227 million through a “cash equity” transaction, arranging to sell private investors 20 years of future cash flow (including tax benefits) from its residential and commercial solar-panel contracts.

Even before a disappointing earnings statement last week, SolarCity’s stock value had dropped 60 percent from its mid-December 2015 level, and the bearish short-seller James Chanos was predicting “financial trouble” for the firm in 2016. Still, most analysts continue to rate the stock as a “buy.” Their optimism rests heavily on Musk’s dream of making solar power “the world’s predominant source of energy within our lifetimes,” which will require SolarCity’s Buffalo plant to mass-produce a new type of solar panel that produces electricity at a lower cost than previous models.

New York, in short, has a lot riding on the success of “the Muskonomy,” as Slate’s Daniel Gross described the SolarCity-SpaceX-Tesla constellation. If the operation proves a success, Buffalo is expected directly and indirectly to gain 2,900 jobs—equivalent to less than 1 percent of the region’s total private-sector employment, but 5 percent of its current manufacturing-employment base. Like most other upstate communities, Buffalo could use a boost: in the past five years, its private job growth has consistently ranked among the lowest of any major metro area in the nation. And if SolarCity completely flops? Well, New York State will still own the world’s largest solar-panel manufacturing facility.

While the jury is out on solar, Musk recently celebrated some marketing successes and technical breakthroughs on other fronts. Tesla reported large pre-orders for its Model 3 electric car. And SpaceX celebrated the first-ever recovery and vertical touchdown on land of its booster rocket. SpaceX also has announced a partnership with NASA to launch an unmanned mission to Mars—to which Elon Musk has suggested he’d like to retire. If not the Red Planet, there’s always Buffalo.

E. J. McMahon is a Manhattan Institute senior fellow. He is also president of the Empire Center for Public Policy, Inc., an independent think tank based in Albany, New York.

Anatomy of an Albany Budget Blowout

E. J. McMahon Socialist India Walton is poised to be Buffalo’s next mayor—can she bring the political revolution to the Queen City?
eye on the news

Diana Furchtgott-Roth If President Biden wants to tackle higher prices, he should forget about more tax hikes and instead reverse his policies on domestic oil and natural gas production.
eye on the news

Can We Avoid a Recession?