Six years ago, Mayor Michael Bloomberg justified a $1.8 billion property-tax hike by comparing New York City with a “luxury product” that businesses were willing to pay more for. “It isn’t Wal-Mart,” Bloomberg said. “It isn’t trying to be the lowest-priced product on the market.” One can only imagine what the mayor thinks of his analogy now. After all, demand for luxury goods tends to fall sharply in recessions, in part because the customer base for these products is narrow and highly sensitive to economic swings. That’s why the luxury market has virtually collapsed in recent months, while Wal-Mart remains among the best-performing retailers in America.

Will something similar happen to Gotham? In the wake of the global financial crisis, New York’s luxury consumers—that is, the Wall Street firms that paid the city’s bills—are likely to shrink considerably and generate far less in profits and wages. New York will need to find someone to replace them. Yet the city will be hard-pressed to find another industry that can afford its staggering local tax burden, which has grown steadily under the businessman mayor. True, New York’s quality of life has improved enormously over the past 15 years, and today it is one of America’s safest and most livable big cities. But if it is to attract taxpaying businesses after Wall Street’s meltdown, it must also price itself competitively.

Those are enormous differences, potentially adding up to millions of dollars per year for a big company. A 500,000-square-foot lease, typical for a firm with 2,000 employees, entails $7.5 million in annual real-estate taxes in midtown Manhattan, compared with $1.5 million in the nearby Jersey suburbs. For a company of that size that decides to leave New York City, that’s $6 million, straight to the bottom line. As the city’s Independent Budget Office (IBO) wrote a while back: “When these [tax] differences are coupled with steep income tax discounts available on the western shore of the Hudson, New Jersey and to some extent Westchester and Connecticut have had success in attracting firms, jobs and commercial investment from the city.”

New York’s property-tax structure is singularly inequitable, with the effective tax rate on commercial property a whopping seven times higher than the rate on residential property. No other major city dumps such a disproportionate burden on its businesses. On average, in other big cities, commercial rates are just 1.7 times higher than residential ones. Because of New York’s skewed system, taxes from commercial properties make up half of all realty-tax collections in New York, compared with just 26 percent in Los Angeles, 31 percent in Philadelphia, and 32 percent in Dallas.

Property taxes are only one way that New York competes poorly with other cities to attract businesses. A 2007 IBO study calculated that New York’s total local tax bite was 90 percent higher than the American big-city average. A large part of the reason was taxes on business income. Businesses in New York wound up paying the city $1.06 out of every $100 of taxable income (on top of state and federal taxes, of course). The average in other cities: just 55 cents in local taxes out of every $100 of taxable income.

Even more troubling is that the city’s tax bite has been getting bigger. A previous IBO study estimated that New York’s local tax burden in 1997 was 79 percent higher than other cities’. Between 1997 and 2000, it declined by 8 percent because of tax cuts enacted by the Giuliani administration and the city council. Those tax cuts paid off in a vibrant economy. According to a Manhattan Institute study using the State Tax Analysis Modeling Program (STAMP)—a model created by the Beacon Hill Institute that estimates the impact of taxes on a local economy—the reductions in personal income, property, business, and sales taxes generated 80,000 jobs for the city between 1997 and 2000.

But the city reversed course in 2003 with Bloomberg’s massive property-tax increase—the single largest tax hike in the city’s history, which the STAMP estimates has cost New York some 62,000 jobs. The city has also added another bundle of targeted tax increases. And the latest budget contains yet another $900 million or so in proposed new taxes, which would widen the competitive gap between New York and other major cities.

Who’s going to pay these levies? Back in 2006, the answer was obvious. The securities industry generated an astonishing $33 billion in pretax profits, one reason why the city took in about $1.8 billion more in personal income and general corporation taxes than it had anticipated for fiscal year 2007. The finance bubble also helped expand banking taxes by $727 million beyond projections. Times were so flush on Wall Street that securities workers accounted for about a quarter of all wages earned in New York that year, and so-called FIRE firms (in finance, insurance, and real estate) paid a third of all business taxes in the city.

Rather than using its surpluses to return to the tax-cutting of the late 1990s, however, the city let its swelling budget soak them up, creating a much larger budget baseline. During Bloomberg’s first six years in office, from 2002 through fiscal year 2007, the city’s budget increased by nearly a quarter after inflation. New York now spends about twice as much per capita as the average of the nation’s ten largest cities.

Fueling the growth were huge increases in education outlays, now a hefty $20,000 per pupil—more than in many tony suburban districts. Employee costs have also risen rapidly and unnecessarily. The average annual compensation for a city worker, including salary and benefits, is an eye-popping $106,000. Since 2000, the city’s per-worker pension costs have increased more than sevenfold, from about $2,500 annually to north of $20,000. Rich contract deals negotiated between the unions and city hall, as well as porcine benefits packages bestowed by state legislators in Albany, have pushed these costs way beyond what similar workers earn in the private sector and way beyond what is necessary to attract qualified workers to city government.

Now the bill is coming due, and the crippled finance industry won’t be paying it. In 2007, Wall Street lost an estimated $47 billion, according to the New York State Comptroller’s office. A number of prominent firms are surviving only after receiving life support from the federal government, which has given Washington the power to slash salaries and bonus packages—thereby reducing New York’s tax revenues. Further, some of the city’s most important firms, like Citicorp, have so many toxic assets on their books that they are virtually insolvent and will not have the capital any time soon to place the kinds of big global investment bets that generated the profits that energized New York’s economy.

Of course, less demand from Wall Street will drive down prices in New York on real estate and other services, which will help the city’s competitive position. But those lower prices will come with certain economic shocks. The implosion of real-estate demand, for instance, will result in a painful contraction in the construction industry—until recently, one of the few bright spots in the city’s economy outside Wall Street.

A post-bubble New York, one that can no longer harness Wall Street’s old earning power, will have to lure new businesses by hacking away at taxes. First to go after should be the personal income tax, a levy that only a few American cities and virtually no suburban areas impose. It is the most commonly paid, and therefore the most influential, of the city’s taxes, and it especially hurts small firms because many of them pay taxes on their corporate profits through the personal levy. Making New York more competitive will also mean reforming its property-tax system to lighten the heavy burden on businesses that locate here.

We need to relearn the lessons of the 1990s, when tax cuts helped ignite growth. Take the Giuliani administration’s elimination, in 2000, of the tax on clothing purchases under $110. The next year, employment at city stores that sold clothing jumped by 7,000 jobs—and collections from the sales tax actually increased by $52 million, as more New Yorkers stayed in the city to shop for taxable as well as nontaxable items. (Bloomberg has since reimposed the tax.) The bottom line is that since New York no longer has a fabulously wealthy business community as its customer base, it cannot remain a luxury product. It will need to appeal to less well-heeled businesses—if not quite the equivalent of Wal-Mart shoppers, then perhaps something like the moderate-income customers who patronize that New York landmark, Macy’s.

Steven Malanga is the senior editor of City Journal and a senior fellow at the Manhattan Institute. He is the author of The New New Left. 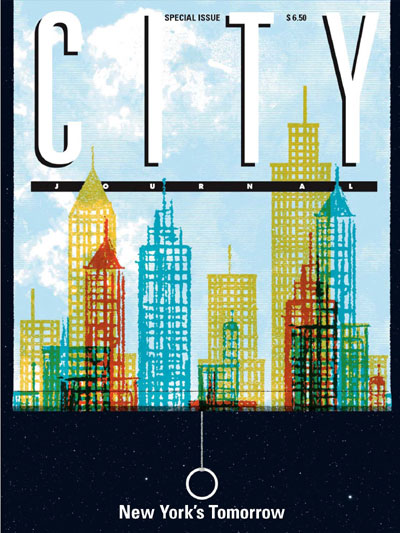 Steven Malanga Democrats press Biden to reinstate a tax break for the wealthy.
More on

Time’s Up in Times Square

Nicole Gelinas Women can’t feel safe in broad daylight at the Crossroads of the World.

Ray Domanico The city’s next mayor must develop a workable plan that is educationally sound and fair to all.