On the western edge of the park, though, a tree-shaded alley presents a scene more reminiscent of Panic in Needle Park or Last Exit to Brooklyn. Men holding up lampposts eye passersby and quietly solicit, “Smoke, smoke?” Hard-bitten homeless people with matted hair and filthy sweatshirts slump on benches, jumping up periodically to yell, pace around, and flop back down a minute later. Bent at the waist, an addict nods in the middle of the path. A group of men sit on a bench chatting, as one casually counts twists of crack cocaine from his palm into his baseball cap, in midafternoon. 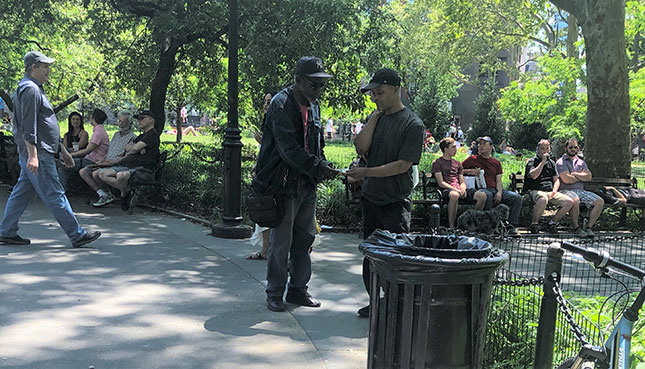 Marijuana-dealing has been a feature of Washington Square Park for years. But the current scene differs qualitatively from the park’s traditional vibe. In his 2018 book The Taming of New York’s Washington Square, sociologist Erich Goode claims that selling pot is “routine” and contained—a minor, harmless feature of park life. “From time to time, the media or concerned citizens will attempt to generate a moral panic. . . . These panics flare up and die down.” Goode maintains that while “the sale of marijuana is routine and ongoing, its overt use is uncommon.”

I’m not sure when Goode last spent any significant time in Washington Square, but not only is the “overt use” of marijuana ubiquitous; the overt use of crack cocaine is becoming hard to miss. I spent a few hours the last couple of weekends sitting on benches near the center of the drug activity, just to observe. I have been walking through and around Washington Square and the East Village for 30 years, and I lived for more than a decade near a notorious drug corridor in upper Manhattan, so I’m no wide-eyed newcomer. What’s going on right now is bad news. 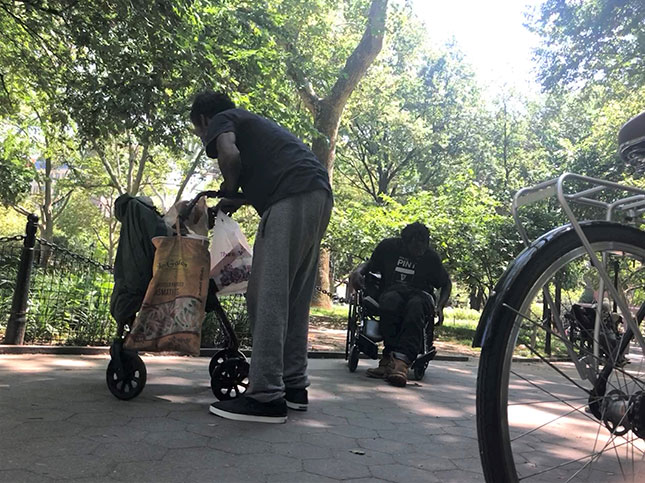 Walking into the northwest corner of the park at about 3 p.m., I overhear the tail end of a transaction: “Leave the money there,” an older Rasta man tells someone. The buyer stuffs a few tens into the slats of his bench. I pass a poker game and sit down on an empty bench across from a guy who is sound asleep. Sneakers, bags, litter, and blankets lie around in heaps; I see a pup tent erected in the ivy. Three or four men, in their forties or fifties, eye me curiously, and one comes over to ask if I want weed. I’m okay, I tell him. “What else you need, man?”

After about five minutes, a lanky redhead in a blue tank top comes marching past. He sits near the poker game and greets someone with an elaborate handshake, and then after half a minute steps away. He sits next to some friends, takes out a small glass tube, fiddles with it, lights up, and starts exhaling smoke. His associate, who looks as though he has been sleeping outside, takes the pipe but is more circumspect: he leans over the back of the bench to smoke.

A woman dozing next to them comes to life. Somewhere between 30 and 60, she wears a stringy wig. She stumbles between the benches, hollering imprecations, drinking from a pint bottle of vodka. A hardcore addict shuffles by in the other direction, holding his pants up with one hand. A few minutes later comes a youngish woman with horrible marks over her arms, legs, and face. I see her in the park regularly, usually crying matter-of-factly, as though weeping is just her natural tone. “I’m not a little girl, and you can’t tell me what to do, because I’m not a little girl,” she sniffles. She roots through the pockets of the sleeping man, but familiarly, as though he wouldn’t mind. He doesn’t wake up. Leaving, I pass the Rasta guy again, talking to a foreign tourist. He looks at me and asks, “Are you smoking?” with his hands raised in the universal “Or what?” gesture. 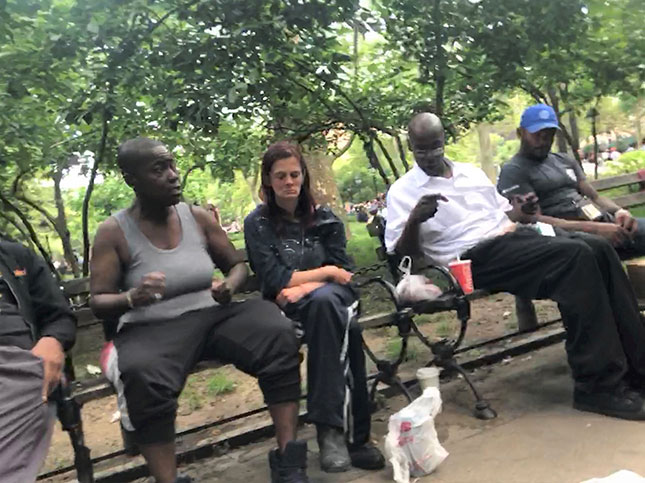 Coming back the next day, I see a clutch of ten or 15 people circulating like commodity traders. Money and goods change hands openly, without the disguise of complicated greetings. From about 30 feet away, someone sitting behind a table raises his hand at me and shouts, “Yo! Yo!” He puts his fingers to his lips to indicate smoking. The guy in the blue tank top is again hitting his crack pipe. Under a denim jacket, someone is either shooting up or doing something else he wants to hide. About 15 or 20 people appear intrinsic to the park drug trade, with another 15 or 20 hangers-on.

All this activity takes place a beer can’s throw from a playground and other, more salubrious, park recreations. People stroll past the passed-out addicts and watchful dealers without fear, though with the cautious sense that they’re passing through a restricted zone, where they wouldn’t stop to picnic or let their children play. I ask two cops who patrol the area what they think about the open-air drug market. “That’s why we walk through there,” says the NYPD sergeant, though their patrols pause drug sales for barely a minute.

Washington Square Park is a tolerant, open space, suited to all kinds of activity, and New Yorkers surely want to keep it that way. The city has come too far to allow its parks to become swamps of depravity.

Photos: Courtesy of the Author

Charles Fain Lehman Reformist advocates try to downplay the Manhattan DA’s agenda—but its implications are clear.
eye on the news

Hinging on the Details

Eric Kober If they get it right, Governor Kathy Hochul and the state legislature could bring about a sea change in New York housing policy.
eye on the news