In a major blow to the U.S. nuclear-energy industry, China is helping Saudi Arabia create a facility to produce uranium “yellowcake” from uranium ore, according to reporting by the Wall Street Journal and New York Times. The deal is further evidence that America’s antinuclear energy policies are pushing U.S. allies into the arms of our illiberal and undemocratic rivals.

“The Chinese will expand the breadth of their engagement with the Saudis and become a supplier of nuclear plants,” a U.S. nuclear industry official told me, “which will lock China in as the leading supplier of influence over the next century.” Part of the reason the Chinese-Saudi facility is such big news is because it would bring the kingdom one step closer to enriching uranium, which could be used for a power plant—or for a weapon.

“The potential of a lot of countries in the Middle East going nuclear is very real,” says nuclear weapons expert Richard Rhodes. “And the idea of Middle Eastern nations armed with nuclear weapons is scary given how reactive they are to each other.”

As recently as 2018, momentum had been growing for Congress to approve an agreement for U.S. firms to help Saudi Arabia on the nuclear front, on the thinking that it was better for the U.S. than the Chinese to be involved. Congress has been under pressure to make a deal with the Saudis since 2017, the year Riyadh announced a deal with China to extract uranium from seawater. In April 2018, a bipartisan group of diplomats and officials warned Congress that “Riyadh will buy its nuclear reactors from China” if restrictions on U.S. nuclear energy support were too strict, and thus “undercut the U.S. ability to influence nuclear power, security and safety programs in Saudi Arabia.” But then, that fall, men allegedly working for Mohammad bin Salman, the ruling crown prince of Saudi Arabia killed Jamal Khashoggi, a Saudi journalist and Washington Post columnist.

“Up until that point, everybody in strategic affairs, including in the non-proliferation community, knew that we had to be that nuclear supplier to the Saudis,” the nuclear industry official said. “Then Khashoggi happened. People got scared and decided to use their influence somewhere else.”

But Saudi Arabia’s desire for nuclear energy didn’t go away, and the 1970 Non-Proliferation of Nuclear Weapons Treaty (NPT), which most nations—including the U.S., China, and Saudi Arabia—have ratified, protects the right of nations to enrich their own uranium. Indeed, that NPT provision is why the U.S. and Europe have allowed Iran to pursue uranium enrichment. Saudi Arabia views the U.S double standard toward Iran as hypocritical and insulting.

“When the [Iran deal] was concluded, [President] Obama should have accepted that we couldn’t ask the Saudis to renounce enrichment,” said the official. Human rights abuses, terrible as they are, do not abrogate the NPT. “I think they’ve killed a journalist or two in Iran over the years.”

In the 1950s and for most of the 1960s, Democrats and Republicans worked together to promote nuclear energy. That changed in the 1970s. President Jimmy Carter and Democrats in Congress passed legislation in 1978 that added new restrictions under Section 123 of the Atomic Energy Act to restrict the flow of nuclear energy technologies from the U.S. to nations around the world. That amendment requires nations that want to enrich uranium using U.S. technology to get U.S. government permission first.

“The 123 agreement is already the strictest in the world,” complained the industry official. But the U.S. tried to make the deal even stricter.

Where Republicans have been apathetic, Democrats have been activists in trying to regulate nuclear energy out of existence and prevent the U.S. from helping nations abroad develop their nuclear capacity. “There are people in Congress who don’t understand that, if the U.S. government won’t sell nuclear energy to a country, others will,” says Seth Grae of Lightbridge Corporation, one of several nuclear industry CEOs who met with President Donald Trump at the White House last year.

Some Democrats recognize that we need nuclear energy to address climate change. Presumptive Democratic presidential nominee Joe Biden’s plan calls for the continued operation of existing nuclear plants and more research and development for the future. Yet Democrats continue to push for the closure of nuclear plants. The U.S. plans to close 12 reactors by 2025 and could lose half of the rest of its reactors over the next decade. Two of those reactors are at New York’s Indian Point nuclear plant, which Representative Alexandria Ocasio-Cortez, not long after proclaiming her open-mindedness on nuclear, called for shutting down.

Some nuclear industry officials hope that the U.S. will, in the future, “leapfrog” over China and Russia with smaller “modular” reactor designs, micro-reactors, and radical new reactor-coolant combinations such as those being pursued by Bill Gates. Biden’s plan calls for more R&D into these novel designs.

But China and Russia are already far ahead of the U.S. on building and selling small, modular, and radical designs, as well as the standard water-cooled ones that most nations have chosen to build since the 1950s. If the U.S. fails to compete with China and Russia, no other liberal democratic or Western nation will. France, Japan, and South Korea have largely withdrawn from international competition.

China and Russia have become more totalitarian and dictatorial since the coronavirus pandemic began. The Chinese appear to be accelerating the genocide of the Uighurs, an ethnic Muslim minority, and the Russians appear to have given Vladimir Putin the power to rule for life. And now, Beijing and Moscow are exploiting the rising left-wing opposition to economic growth in developed nations. After Swedish climate activist Greta Thunberg condemned “endless economic growth” at the United Nations last year, Russian President Vladimir Putin said, “No one has explained to Greta that . . . people in Africa or in many Asian countries want to live at the same wealth level as in Sweden.”

Putin’s message is no doubt more appealing than Thunberg’s to the nations seeking nuclear power, which include Bangladesh, Bolivia, Brazil, Egypt, Hungary, India, Jordan, Kazakhstan, Nigeria, Pakistan, South Africa, Sudan, Turkey, Uzbekistan, and Zambia. “It’s a powder keg type of situation,” says Rhodes, “as well as a longer-term question of who is going to shape the world.”

The China-Saudi deal should serve as a wake-up call to Congress and the national security and nonproliferation community. It’s time for the U.S. to realign its policies with the NPT and take action to compete with the Chinese and Russians. Nations looking to build nuclear plants will choose partners with experience building them. This is a problem for the U.S., which is currently building just two reactors in Georgia. By contrast, China and Russia are building 37 reactors at home and abroad.

To compete, the U.S. must make global nuclear energy superiority a national security goal. This starts with either designating a new “national champion” nuclear building firm or creating a state-owned nuclear company capable of competing with Russian and Chinese firms. The national champion strategy, of course, is more amenable to the American free-market system. In the postwar period, Westinghouse and General Electric were America’s two national nuclear champions, but they’re no longer in the business of building nuclear plants. Privately held Bechtel, currently completing two Westinghouse-designed AP1000 nuclear reactors for the Southern Company Electric Utility in Georgia, may be a good candidate—if it can count on federal support. Such a firm should offer turnkey nuclear plants, including financing, fuel, and initial operations, as it trains local engineers to take over.

Our goal should be to boost the share of U.S. electricity generated from nuclear power from today’s 20 percent to at least 50 percent by 2050. Congress should ensure that after Bechtel completes building the two reactors in Georgia, its construction crews are hired to complete two identical reactors at Virgil C. Summer Nuclear Power Station in South Carolina, where construction was abandoned in 2017. With four world-class AP1000 nuclear reactors built, American construction managers and workers would be well-positioned to compete to build the same reactors around the world, where China and Russia are already pitching their own designs.

As part of this effort, Congress should make sure that all of today’s reactors, including recently shuttered ones, stay open for at least 80 years. Congress should also consider amending the Atomic Energy Act to let the U.S. help nations develop uranium-enrichment facilities, just as China and Russia do now.

It was never realistic for the U.S. to demand that Saudi Arabia not develop uranium-enrichment capability to match that of Iran. American experts stress that the U.S. could help ensure that Saudia Arabia’s enrichment is used for peaceful purposes. “Everyone involved is a signatory to an agreement that requires intrusive inspections and all sorts of restrictions,” noted Rhodes. “So as long as that’s in place, we should feel comfortable.”

Congress and the White House must act thoughtfully and deliberately—but also decisively—before it’s too late.

Michael Shellenberger is the founder and president of Environmental Progress and author of Apocalypse Never: Why Environmental Alarmism Hurts Us All. 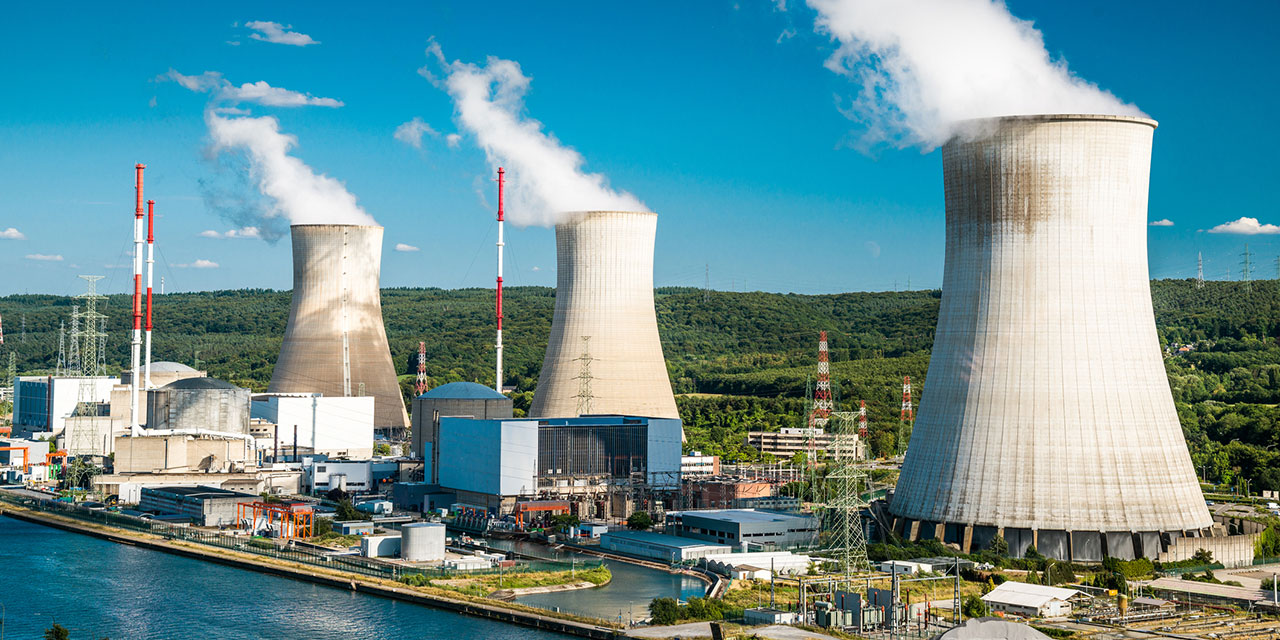