Beth Akers joins John Stossel to discuss the purported crisis over student loans and new approaches to the financing of higher education.

Democratic presidential hopefuls, including Senators Bernie Sanders and Elizabeth Warren, have promised to spend trillions of dollars to bail out young people struggling with student-loan debt. But Akers’s research shows that 66 percent of millennials have no student debt, while a substantial portion of others have modest burdens in proportion to their incomes. And federal programs already exist to help those with truly unaffordable debt.

Instead of student loans, Akers and others suggest a new approach to paying for higher education that takes debt entirely out of the equation: income-share agreements. With ISAs, students pay an affordable share of their income directly (if they find a job) rather than navigate an obscure system of loans and repayment plans. 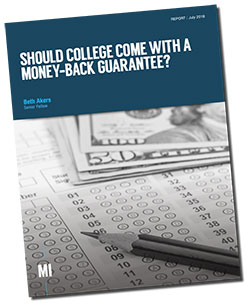 Learn more about income-share agreements and other alternatives to traditional higher-education financing.

This video is part of a special collaboration with John Stossel and City Journal contributors.

John Stossel: So government would take over student loans.

Sen. Durbin (D-IL): We take the middleman out. We take the banker out of the picture. Because they're taking a profit.

John Stossel: But instead, the cost to taxpayers went up, and student debt increased.

Rep. Waters (D-CA): What are you guys doing to help us with the student loan debt?

John Stossel: Some politicians are still so eager to blame banks, they don't even know that they kicked banks out of the loan business.

Rep. Waters (D-CA): Who would like to answer first?

Michael Corbat: We stopped making student loans in 2007, or so.

John Stossel: If actual private lenders, people with skin in the game, made college loans, they'd care about being paid back. They'd tell students which majors often lead to higher paying careers, and warn them that majoring in say sociology, art history, or gender studies, might make it tougher to get out of debt.

Beth Akers: If I'm a young person going to college, the federal government doesn't tell me that the amount that I'm borrowing is probably going to be unaffordable for me. Because I'm on a path towards a low-earnings occupation.

John Stossel: Beth Akers, over at Manhattan Institute is the author of Game of Loans.

John Stossel: Under the government program, no student has a reason even to think about, "Will I earn money?"

Beth Akers: That's right. We charge everyone the same interest rate, and we give them the same caps on how much they can borrow.

John Stossel: Currently, many students are really dumb about their loans. 28% don't even know they have a loan?

Beth Akers: It's not because they're dumb. It's because we've made a system that's really complex.

Protesters: Enough is enough. Pay us back.

Beth Akers: It ends up giving very large benefits to people who probably don't need it.

John Stossel: So it would be welfare for the rich?

Beth Akers: It sure would.

John Stossel: A better solution, says Akers, is something called an ISA, an income-share agreement.

Lambda School Ad: So you want to be a web developer? Sign up. Pay nothing upfront. That's right. Nothing.

John Stossel: Some private computer education boot camps do that.

Beth Akers: That gets them into a career, most often in coding.

John Stossel: So those people were getting jobs.

Beth Akers: Yeah. The ISA was a way for the school to say to them, "You're only going to pay us if we help you succeed."

John Stossel: Now some colleges offer ISA's. Graduates who get jobs, repay the loans by paying the college a percentage of their income.

Beth Akers: In the past five years, people are starting to get excited, and try to implement income-share agreements.

Paul Laurora: At first I was like, I had no idea how it was going to move forward and pay for my education.

John Stossel: Engineering student, Paul Laurora, was thrilled to learn that Purdue would help him get an ISA loan. So was Andrew Hoyler, who's just started working as a pilot. Now that he has a job, he must pay the university 8% of his income, for 104 months.

Andrew Hoyler: So after that 104 month term ends, if you still have money that you owe, it's forgiven, it's forgotten, you don't owe another penny. Now, if I find myself in a six figure job tomorrow, there's a chance that I'll pay back far more than I initially took out.

John Stossel: But you're okay with that?

Andrew Hoyler: I'm okay with that. The security of knowing that I'll never pay back more than I can afford every month was enough for me.

John Stossel: If it's so good for you, I'd think it would be bad for the investor.

Andrew Hoyler: It's a risk that they take, just like an investment.

Beth Akers: It conveys information to the student about how lucrative a different major's going to be.

John Stossel: English majors must pay four and a half percent of their income, for 116 months. Math majors pay 4% for just 96 months.

Beth Akers: Some people think that's unfair, but really, that's just a way that they can recapture the amount of money that they've put up in the first place.

John Stossel: This is new, useful information about what professions pay.

Andrew Hoyler: Not only what they pay, but how stable it may be, what their future is like. It may even sway students away from going into majors that don't have job prospects post-graduation.

John Stossel: The English major has to pay 116 months. Your loan is over 30 months sooner.

Paul Laurora: It's definitely something to look forward to, that I can stop paying people quicker.

Beth Akers: We should think about investing in students the same way that we invest in startups, share equity in their company.

Beth Akers: It may be that there are rich investors feeding money into that fund, but it's not an individual connection between students and investors.

Paul Laurora: We don't know who the investor is, but I'd love to give him a hug, or buy him a beer or something.

Beth Akers: The institutions are saying, "Hey, if I'm operating as the middleman, in a sense, I can make sure that no one's taking advantage of my students."

John Stossel: Still, some call ISA's predatory. This is like indentured servitude. You're locked into paying for all these months.

Paul Laurora: And if you're graduating, and you don't have a job, you're not paying anything. So where's the servitude in that?

Andrew Hoyler: It's a brand new industry. The public's still learning, the investors are still learning. They really care about the students. It is a win-win situation for everyone involved in it.