One recent morning a disheveled, visibly disturbed man ran frantically around the lobby of the Mark Hopkins Hotel, the historic and elegant property located at the crest of tony Nob Hill. As one of San Francisco’s designated Front-Line Worker Housing (FLWH) hotels, it’s reserved for health-care and public-safety employees working on Covid-19 related matters. But San Francisco is surreptitiously placing homeless people in luxury hotels by designating them as emergency front-line workers, a term that the broader community understands to mean doctors, nurses, and similar professionals.

“Do I look scary to you?” the man demanded. “They’re trying to evict me because I wanted more towels but I’m homeless! They called the cops on me.” He dashed out the door and around the grand circular entrance, where two police officers attempted to resolve the situation. Soon a cab pulled up and an inebriated couple emerged, holding full plastic trash bags. They fought, screaming at each other until the woman entered the lobby and her partner lit a meth pipe in the garage area. More “front-line workers.”

If neighborhood residents were more aware of the influx of these new guests who frequently suffer from drug addiction and severe mental illness as well as having criminal backgrounds, they might object. Consequently, the city has evoked emergency-disaster law to keep the information private. Officials refuse to notify the public about what is happening in their community and are blocking the press by withholding the list of hotels and preventing reporters from entering the properties. The Department of Emergency Management has attempted to spin the secrecy by claiming, “Disclosure of the names of hotels where people are being sheltered could jeopardize the privacy and safety of the vulnerable people whom the City has placed there if the public and the press become aware of the circumstances of their placement and could increase the risk that they will be subject to discrimination or harassment on the basis of their health status or status as an unsheltered person.”

The public does have a right to know, however, and obfuscation is ultimately futile. Security guards standing outside hotel entrances, where they had never been before, are clear indicators that something is amiss. An uptick in crime, drug activity, and vagrancy around the hotels is another clue. Properties that have become de facto homeless shelters range from low-end haunts such as the Motel 6 to mid-range and boutique hotels like the Inn on Broadway. High-end hotels that house the homeless-turned-frontline-workers include the InterContinental San Francisco —and the Mark Hopkins.

The Department of Public Health manages the controversial free alcohol, cigarette, and cannabis program for homeless people placed in the hotels. It originally claimed that money for the service came from private donations, which are not allowed by law. After multiple requests to provide the names of the donors, the DPH conceded that “No such record currently exists.” A public-records investigation into the matter has revealed that, as of June 16, DPH approved $3,795.98 to buy the homeless guests vodka and beer (cigarettes have been scrapped). The funding came from the public treasury, after all.

Meanwhile chaos is erupting inside and around the hotels. City and hotel workers are required to sign nondisclosure agreements and are forbidden from discussing what they’re seeing. Per the Mayor’s Declaration of Emergency, speaking out can result in a fine of up to $1,000, imprisonment with a maximum sentence of one year, or both.

Nevertheless, concerned inside sources report destroyed rooms and rampant illegal drug use. In one hotel, guests are given needle kits and are advised to call the front desk before shooting up; there have been four deaths in the last few days. Sharp containers have been placed on every floor; used syringes are discarded haphazardly. Badly needed mental-health help is not being administered. The entire operation is disorganized, with staff members constantly moved around, never knowing what they’ll do from one day to the next. One source asked to make it clear that as public servants they love the city and all its inhabitants, but the plan has left them deeply demoralized.

The hotels were pressured into accepting the homeless guests, though they were also eager for the chance to recoup some revenue lost to the Covid-19 lockdowns. Rooms are rented at close to $200 per night, totaling $6,000 a month—nearly double the cost of a private one-bedroom apartment in San Francisco. The city-sponsored guests also receive personal grooming, sanitary, and cleaning supplies, three delivered meals, and laundry service for clothes and linens. Contracts last between 90 days and two years; by that point, the guests may be able to claim de facto permanent residence.

Hotel owners consented to the arrangements fully aware of the potential pitfalls, having been assured that FEMA dollars would cover at least some of the damages incurred. As part of the agreement, the city promised the hoteliers, who are worried about bad publicity, that they wouldn’t reveal who their guests are and what they’ve been doing during their stay. Even with complementary lodging and amenities, city workers report at least a 20 percent attrition rate. Of the guests who remain, roughly a third stay outside all day, not taking the shelter-in-place rules seriously.

In the end, the wildly expensive hotel plan is unlikely to help most homeless individuals achieve self-sufficient lives and won’t elevate the city’s most destitute districts. Since the plan to shift people from tents and doorways to hotels began in May, the blighted neighborhoods have shown no sign of improvement. That’s not surprising, since change is not likely until the city disallows tents completely, abandons its hands-off drug-dealing and usage policies, and commits to treating people with addiction issues and mental illness—not giving them hotel rooms where they can overdose, whether alone or with others whom they bring into the property. At one FLWH hotel, a non-guest was recently found dead in the hallway, still clinging to a crack pipe.

Eventually, at least some of these properties will revert to being real hotels again, and homeless guests will check out. If the city has an exit plan for what happens next, though, officials aren’t sharing it.

As for the distressed “front-line worker” at the Mark Hopkins, the Department of Emergency Management announced that he is no longer permitted to remain at the hotel. “The City will be providing accommodations for this individual at an alternative program location.” Media, says DEM, are not allowed on site. 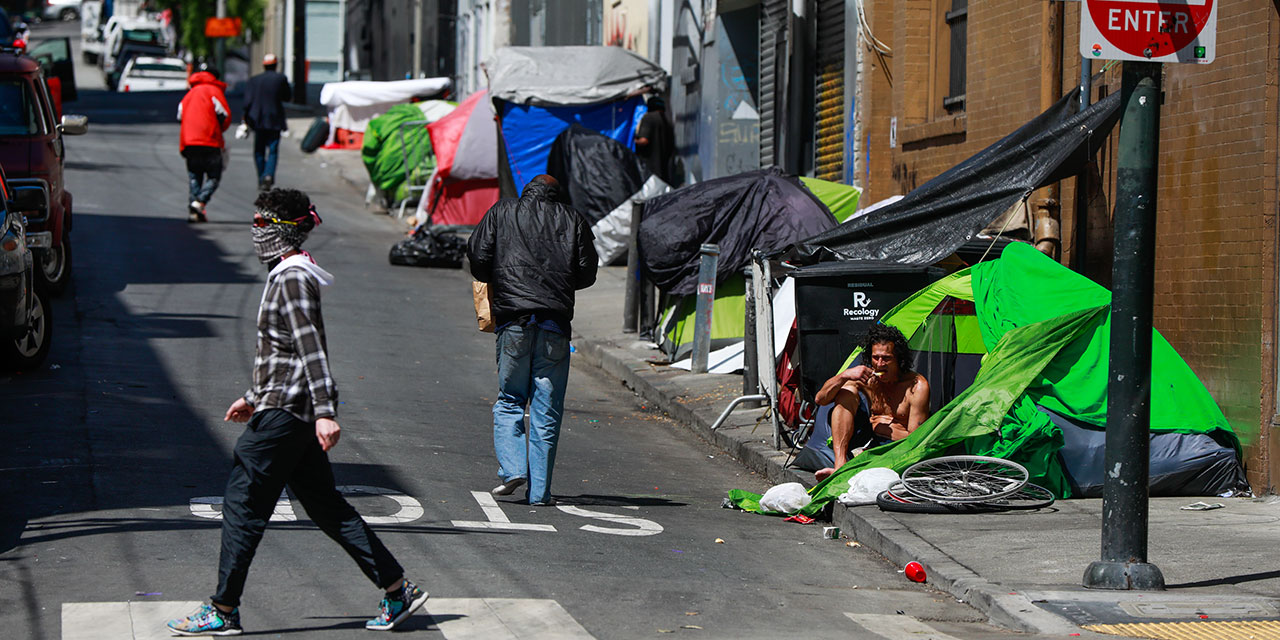 Erica Sandberg A hotels-for-homeless program does nothing to address the real problem: addiction.
More on