The moving trucks are here. On any given day, you can see two or three on a single block, loading mattresses, sofas, microwaves. Yes, some residents are leaving. I’m not among them.

In fact, while the visible signs of exodus are alarming, the majority of San Francisco’s nearly 1 million residents are staying put—though not without disgust and anger. When Daniel Turner wrote about his departure from Washington, D.C., his words resonated with people in cities around the country. Past a certain point, the bad part of living in an urban environment outweighs the good, when that good is just a ghost.

San Francisco is in crisis. Covid-19 has done damage, but managerial malfeasance is the more chronic virus. Opportunists have exploited the pandemic to advance their pet causes at the expense of citizens, workers, and small businesses. They’re emptying jails of criminals on false pretexts and pushing through “safe” injection sites instead of clamping down on drug dealers. On a recent walk through Fisherman’s Wharf, I informally interviewed shopkeepers. “Did your supervisor come by with a survival plan or even to offer words of encouragement?” I asked. “Hell no. No one from the city cares about us.”

Dee Dee Russell-Lefrak, host of the podcast San Francisco Damn, is scathing, especially about the treatment of her Tenderloin neighborhood. “We have to advocate for basic services,” says Russell-Lefrak. “My district is used as a containment area for addicts who have none of the responsibilities and all of the rights. I don’t recognize the city that I relocated to as a young lady.”

For decades, San Francisco was undeniably fabulous. I held my head high when people asked where I was from. Returning from trips, my heart would flutter as the skyline emerged. Other places are great, but here is best. So there.

Today I’m far humbler. I can’t say San Francisco is elegant or refer to it by its nickname, “the City that knows how,” because it’s not and it doesn’t. It’s always had flaws, but our current leaders have magnified them. Their polices have succeeded in worsening crime—as of July, year-to-date burglaries spiked 53.6 percent and arson is up 51.4 percent—creating more filth, exacerbating homelessness, increasing illegal drug activity, and driving out new and established businesses. That’s quite a track record.

People often tell me now that they’ll never visit San Francisco, let alone consider living here. They ask why I don’t pack my bags. The answer: it’s still glorious, and there is no other place I’d rather be. San Francisco is one of my true loves, and you don’t leave an adored one when she’s down. You fight until she’s back on her feet.

I believe we can resuscitate this precious city. The number of warriors on standby, revving up to do what it takes, is astonishing. I’ve received countless messages from San Franciscans who recognize the abuses and failures of the administration. They come from all income levels, neighborhoods, and political persuasions. People are mobilizing. They’re eager to change things for the better, preparing to battle it out at the ballot box. Strong contenders have emerged, and they’re not beholden to corrupt cohorts or extremist groups like the DOPE Project, which promotes cheerful narcotic use as fatal overdoses climb.

San Francisco is still the best city in the U.S.—yes, that’s a totally biased and subjective declaration. I could carry on about its stunning vistas, fascinating history, marvelous architecture, and culinary delights, but I won’t. That’s all documented in travel books and websites, along with plenty of harsh and accurate criticism. Some assets have disappeared, but only temporarily. This city has an old magic that lures fortune-seekers and inspires new ideas.

A self serving, insular political system has scorched San Francisco. The mayor, supervisors, district attorney, city departments, and nonprofits have been getting away with mass destruction because they’ve been operating, in effect, under cover of darkness. But the light has been switched on, making it easier to see the damage and to identify the perpetrators.

The moving trucks are for other people. No judgment; we get it. But I, like most others here, am keeping my 415. We’ll stay and fight for San Francisco’s life. 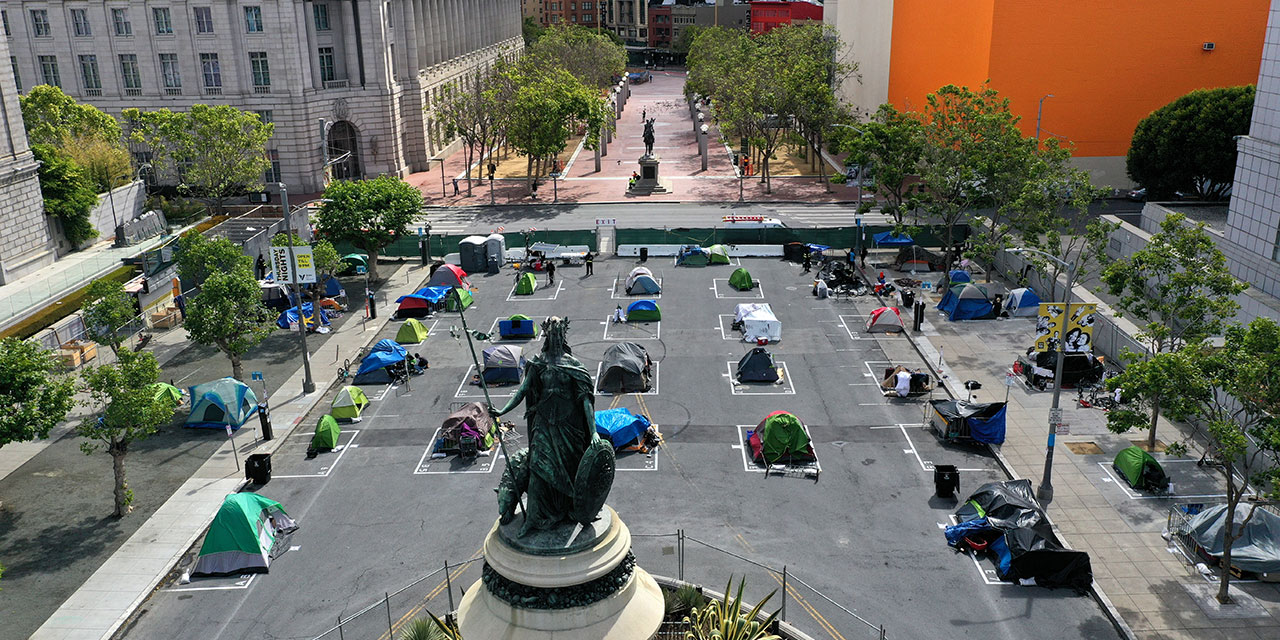 Erica Sandberg A new plan to turn the whole city into a shelter system might finally be the breaking point for residents.

Erica Sandberg “Harm-reduction” advocates do little more than pass out drug supplies to the sick and dying.

Erica Sandberg San Francisco’s plan to put homeless people in hotels and motels is not going well.
More on