New York City’s mayoral contest is currently a tight race between Eric Adams and Andrew Yang, with Adams narrowly winning on the final ranked-choice ballot, according to a mid-May poll of likely Democratic primary voters conducted for the Manhattan Institute.*

The survey shows a fluid race, with Yang edging Adams by a single point (19 percent to 18 percent) when primary voters are asked to rank their first choice. Kathryn Garcia, the city’s former sanitation commissioner, runs third, with the backing of 11 percent of likely voters, just ahead of Maya Wiley at 10 percent. Garcia, fresh off her New York Times endorsement, outpaces the rest of the field as the candidate likely voters have become most interested in learning about over the past few weeks.

Behind these four, at 8 percent, sits Scott Stringer, the city’s comptroller, who has recently come under fire from sexual-misconduct allegations. Businessman Ray McGuire is tied with nonprofit executive Dianne Morales at 6 percent, while Shaun Donovan, the former Obama cabinet secretary, lags at 4 percent. Uniquely, this poll tested all 13 Democratic candidates, including Paperboy Love Prince and Isaac Wright, who both polled around 1 percent each. In all, 14 percent of likely Democratic primary voters remain undecided on the top pick for mayor.

The Manhattan Institute’s analysis of the candidate rankings in this poll finds that, after ten rounds of a recalculated ballot under the ranked-choice system, Adams, the Brooklyn borough president, places first, followed by Yang and Wiley. The eleventh and final round confirms Adams ahead of Yang, 52 percent to 48 percent. 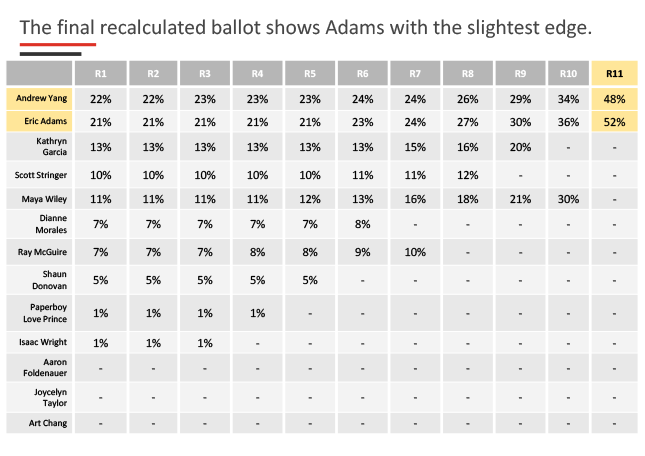 Yang performs strongest among men, younger and more moderate Democrats, and Asian voters, while Adams performs well with African-Americans, conservatives, and Brooklynites. Garcia attracts support from the well-educated; Wiley, from the very liberal; and Stringer, from older women.

It remains unclear how many voters are paying attention. More than three in four likely primary voters didn’t see any part of the recently held mayoral candidate debate. Of those who watched, Adams was the top pick on their initial ballot (22 percent), ahead of Wiley (15 percent) and Stringer (13 percent).

Nearly half of primary voters rate “public safety and crime rates” as one of their top two priorities. But amid rising subway crime, a spike in gun violence, and a shocking shooting in Times Square, the city’s Democratic voters appear to be sending mixed messages on policing: while they are essentially split on the question of “defunding the police,” only 18 percent want to see less police presence in their neighborhoods. In fact, half approve of the job the NYPD is doing. 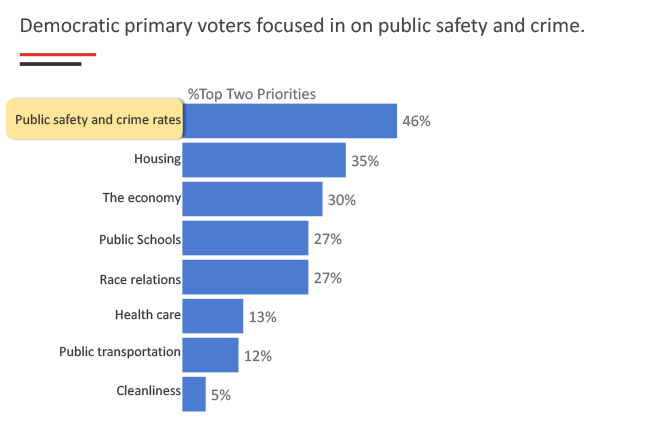 Housing and the economy are next up as top concerns, followed by public schools and race relations. Issue priorities vary considerably by ethnicity: housing and race relations rank at the top for African-Americans; crime is a leading concern for Asians and Hispanics; white New Yorkers care most about the economy. On housing, 57 percent of likely Democratic primary voters in New York City say that they support “allowing more houses, condos, and apartment buildings to be built in the city.”

Even with these concerns, Democratic voters are evenly divided on the direction of the city, with 45 percent saying the city is on the wrong track and 45 percent saying it’s heading in the right direction. They disapprove of the job that Mayor Bill de Blasio is doing but still strongly approve of Governor Andrew Cuomo, brushing aside the sexual harassment allegations leveled against him. The poll queried voters who consider themselves far to the left: 71 percent call themselves “strong Democrats,” while 79 percent say the city would be better off if it were more socialist.

With the June 22 election barely a month away, the race is still taking shape. Yang’s slight lead in the initial first-pick ballot shifts to a narrow lead for Adams in the final ranked-choice vote. Garcia and Wiley both enjoy a positive image and substantive interest among primary voters. And no candidate is the first choice of more than 20 percent of the likely primary electorate. Housing and the economy join public safety as the leading issues—all of which are addressed in the Manhattan Institute’s newly released Mayoral Playbook.

Are the candidates listening?

*On behalf of the Manhattan Institute, Public Opinion Strategies conducted a citywide poll of 500 Democratic voters likely to vote in the mayoral primary election in June. The poll was conducted by telephone (cells and landlines) between May 14 and 17 and has a margin of error of plus or minus 4.38 percent. Respondents were given the option of completing the interview in English or Spanish. Click here to see the full survey results.

Is the Rent Too Damn High?

Michael Hendrix Inflation is eroding Joe Biden’s ability to deliver on his main legislative achievement in office.
eye on the news

Howard Husock Public housing should be a temporary stop on the way to prosperity, not a magnet for long-term dependency.
Saved!
Close