In 2017, Philadelphians elected “progressive prosecutor” Larry Krasner as district attorney. Since taking office, Krasner has pursued a policy of de-prosecution—the decision not to prosecute certain crimes regardless of whether they actually took place—as homicides have spiked. While Philadelphia experienced de-prosecution and rising homicides leading up to Krasner’s election, both trends have accelerated dramatically under his leadership. That he now faces a serious primary challenge in his quest for reelection should come as no surprise.

Under Krasner, Philadelphia is on track to set two city records: the lowest number of felony prosecutions in modern history and the highest number of homicides. Last year was grim enough, as a 30-year low in felony cases prosecuted coincided with 499 homicides—more than New York, which has five times the population, and one shy of the record, reached in 1990 at the height of the crack epidemic. In 2021, the body count is on track to surpass 600. In just six years, the number of homicides in Philadelphia has doubled.

Over the past decade, the media and academics have hailed the enormous power of prosecutors. Less appreciated is that a prosecutor’s power is absolute only in the authority to de-prosecute. If a prosecutor decides to move forward with a criminal case, he or she must still overcome several hurdles: an indictment or preliminary hearing, pretrial motions to suppress evidence, bench or jury trials, and appeals. But if a district attorney decides to de-prosecute a single case, or even an entire category of crime, that decision is unreviewable. De-prosecution is one of the most potent tools in a prosecutor’s arsenal.

Krasner has used de-prosecution at every level of the criminal-justice process. As expected, he has reduced or eliminated misdemeanor drug and shoplifting offenses, but felony drug-dealing and weapons convictions have also dropped by more than half. Though the legislature has duly enacted laws criminalizing certain activities, and though the police have a duty to enforce the law, Krasner has declared that he simply will not prosecute certain crimes. The district attorney’s office reviews and then dismisses, modifies, or approves every arrest that the Philadelphia Police Department makes. Even if a case is approved for arrest, it may be dismissed at preliminary hearings, the first formal adversarial step in Philadelphia’s criminal-justice process. And even if a case makes it through charging approval and a preliminary hearing, it may be dismissed when it is called for trial. Krasner’s office has even dismissed cases after a jury conviction, and despite a judge’s misgivings.

De-prosecution can lead to rising homicides in several ways. Drug dealers and felons who possess weapons—a cohort often involved in homicides—are seeing fewer convictions in Philadelphia. Thus, more potential murderers are wandering around the city these days. Without active drug prosecutions, drug-related murders cannot be solved. As every experienced prosecutor knows, few witnesses will cooperate or provide information to the police in drug-related homicides without the intelligence and leverage created by drug investigations. It is to the city’s detriment that Krasner never prosecuted a case before becoming district attorney. Finally, with homicides going unsolved, a cycle of retaliatory murders unfolds on Philadelphia’s streets, as gangs and individuals take justice into their own hands.

With these mechanisms in mind, juxtaposing the trends is striking. Compare a general measure of felony prosecutions—the annual number of criminal prosecutions in the Philadelphia Court of Common Pleas as reported by the Pennsylvania Sentencing Commission—with the annual number of homicides in the city. The trends are almost precisely inverted, suggesting that the fewer felony prosecutions pursued by the Philadelphia District Attorney’s Office, the more homicides that result. 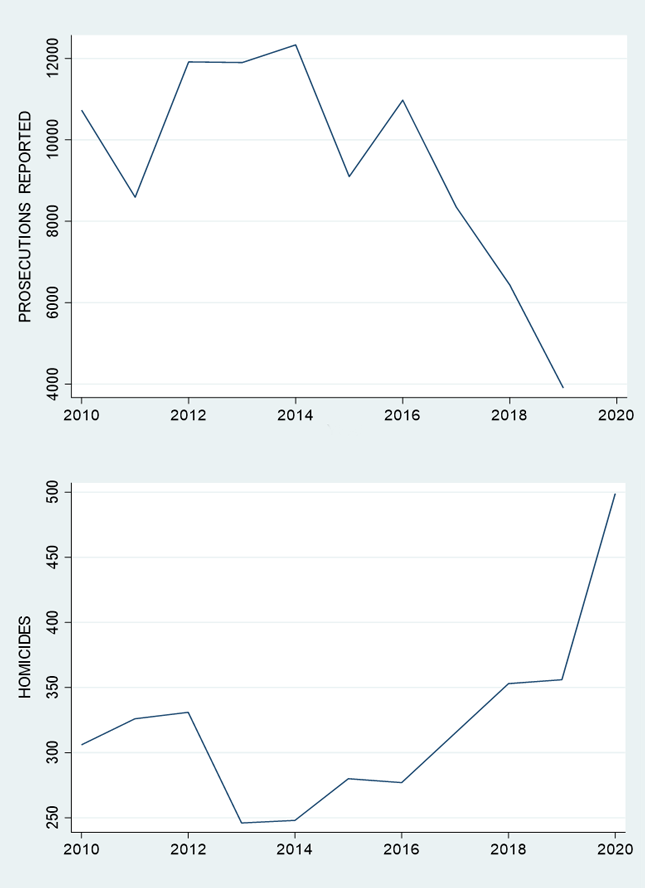 De-prosecution has hit Philadelphia harder than some other cities. In some wealthy cities, such as San Francisco, the policy has led to massive public disorder but not increased homicides; the city’s comparative lack of poor neighborhoods with a history of violence militates against homicides. In others where de-prosecution has been the rule for some time, such as Baltimore, the homicide rate eventually reaches an equilibrium—an intolerably high one, in Baltimore’s case—past which it can move only incrementally. But de-prosecution appears capable of contributing to a rise in homicide in cities already experiencing substantial degrees of poverty and violence, such as St. Louis or Chicago, both of which have seen homicide rates skyrocket.

The victims of de-prosecution are unambiguous—they are the very people whom this misguided policy was meant to help. More than 80 percent of Philadelphia’s homicide victims in 2019 were racial minorities, the vast majority of whom were black. Homicides are concentrated in North, West, and Southwest Philadelphia, the poorest sections of the city. And last year, more than 20 children were shot and killed in Philadelphia and more than 100 others wounded.

More ambiguous are the prosecution data made publicly available by the Philadelphia district attorney’s office, which carry a suggestion of manipulation. On February 25 of this year, a dashboard on the DA’s site stated that 4,325 cases were charged in 2015. Over the next 45 days, that 2015 figure changed drastically, with the following totals reported: 6,642 cases; 7,557 cases; 8,355 cases; 9,832 cases; and 10,136 cases. Meantime, on the same page of the dashboard, a different, unchanging chart lists only 3,327 cases charged for 2015. (The cases charged for 2019 underwent similar changes during the same time period, apparently to account for year-to-date increases but creating an ever-widening gap between the data dashboard’s initial chart and the official numbers from the Pennsylvania Sentencing Commission.) The dashboard also claims that, as of April 7, the district attorney has charged 6,143 cases in the Philadelphia Court of Common Pleas in 2021. At that rate, the DA would be on pace to approve charges in more than 20,000 felony cases for the year—which would represent the highest number of cases ever charged in the Court of Common Pleas (and come as a surprise to progressives everywhere). However, the same data page also shows that the district attorney has charged fewer than 2,000 cases as of April 7. The district attorney’s office did not respond to multiple calls to comment on the discrepancies. All that the official Sentencing Commission reports and Krasner’s dashboard agree upon is that de-prosecution is taking place in Philadelphia.

Hiring a prosecutor not to prosecute crimes may seem like hiring a firefighter to watch your house burn. But Krasner was elected in part because he promised to de-prosecute, and he has delivered. Now Philadelphians will decide whether his keeping that promise was worth it.

Thomas Hogan has served as a federal prosecutor, local prosecutor, elected district attorney, and criminal defense lawyer. He currently is conducting a statistical analysis of de-prosecution and homicide trends in cities across the United States.

This article has been slightly amended. In the ninth paragraph, the language “apparently to account for year-to-date increases but creating an ever-widening gap between the data dashboard’s initial chart and the official numbers from the Pennsylvania Sentencing Commission” has been added.

How Will Memphis Respond to Eliza Fletcher’s Murder?

Thomas Hogan The city’s progressive prosecutor has a decision to make.
More on