What’s a Cop’s Life Worth?

It took City Councilman Charles Barron and the Reverend Al Sharpton little more than a day to denounce the New York police following the fatal police shootings of four thugs this January 1 and 2.

Weeks after the March 10 executions of two undercover officers in Staten Island—they were shot point-blank while trying to buy a semiautomatic weapon from a gang of gun hustlers—Barron, Sharpton, and the rest of the city’s cop haters have preserved a perfect public silence. There were no demonstrations outside the courthouse when the murderers of Detectives James Nemorin and Rodney Andrews were arraigned, unlike the protests that Sharpton organized outside the Bronx court to scream at the four New York officers who mistakenly shot Amadou Diallo in 1999. Nor has anyone paraded coffins outside the homes of the lowlifes who blew out the brains of the two Staten Island detectives, as New York’s anti-cop bigots did outside the Diallo officers’ homes.

Thus are we forced to confront yet again the bizarre calculus of life, race, and criminality that reigns among cop bashers. This calculus assigns wildly different values to lost life, depending on the race of the suspect and the victim—and whether he is a policeman or not.

At the absolute bottom of the heap are dead white cops. No matter how evil the cop slayer, you will never see a protest staged against him. Some residents of the Staten Island neighborhood were at first indifferent to the cops’ deaths, since they had assumed that the deceased were white, according to the New York Post’s Douglas Montero. When they learned that the two undercovers were black, “their attitude changed totally,” an 18-year-old girl told Montero.

In June 2002, a deranged black man shot a white Seattle sheriff’s deputy several times in the head with the deputy’s own gun, killing him instantly. Black leaders who had previously organized lengthy protests against “racial profiling” waited five days to comment on the assassination and did so only after a public outcry about their silence. The national media ignored the story. Less than a month later, the press would pump out 41 stories a day on the far from lethal body-slam of a black teen by a white Inglewood, California, cop, whose testicles the teen had grabbed as the cop was arresting him.

Hardly worth more than the lowly murdered cop is the innocent civilian victim of black or Hispanic criminals, even if the victim is also black or Hispanic. Contemporaneous with the fatal police shootings this New Year’s, a gang of attackers hunted down and murdered 15-year-old Ernesto Reyes, who had been returning from a party at his godparents’ home. This was apparently no big deal to the cop haters, who were busy protesting the wholly justified shootings of thugs by police.

A sniper is currently gunning down small-business owners and customers in Queens and Brooklyn. Barron, Sharpton, et al.? Mute.

In January 2001, the NYPD’s 100th Precinct in Queens escorted the funeral procession of 17-year-old Thomas Johnson, Jr., murdered by 19-year-old lowlife Charles Sealey. Johnson was a football champion, academic star, and local hero, hoping to buy a house for his parents someday. Sealey was a neighborhood menace with prior arrests for assault and drugs. Johnson had tried to mediate a dispute between his cousin and Sealey over a girl, but fled when Sealey drew a handgun. Sealey shot him anyway. “Where’s the ‘civil rights’ leadership?” a stunned police commander asked me at the time.

But let’s move from the bottom to the top of the heap. Get yourself shot by a cop, and if you’re black or Hispanic, you become an instant martyr, no matter the depravity of your character or the circumstances of the shooting.

Take the New Year’s shootings by the NYPD, which Charles Barron called “insane,” and into which Al Sharpton has launched a “probe.” Barron, Sharpton, and the “community” were particularly exercised by the cases of Jamal Nixon and Allen Newsome.

Nineteen-year-old Nixon had previously been arrested for shooting at cops and had just been released from a three-year prison gig for weapons charges. Following a volley of gunfire in a Brooklyn neighborhood in the first hours of January 1, three officers saw Nixon brandishing a 9mm pistol and yelled at him to drop it. He refused and was shot, firing at the cops as he went down, according to a witness.

As for 17-year-old Newsome: he had robbed deliverymen from a Harlem Wimpy’s franchise three times over the previous week, sticking them up with a realistic-looking pellet gun. An undercover cop disguised as a Wimpy’s worker encountered the gun-toting Newsome in an apartment stairwell. The robber pointed his gun at the undercover’s left eye. After the officer slipped and fell, his partner rounded the corner, saw Newsome pointing a gun at the fallen cop, and shot him.

These “victims” drew the cops’ attention by their criminal behavior and nothing else. In that, they resemble Cincinnati’s famous “15 black men,” the talismanic chant of rioters who tore apart the city in April 2001. The 15 had been killed by the Cincinnati cops from 1995 to 2001; nearly all were violent criminals who had brought their deaths upon themselves. Yet just as the national media in 2001 seized on the race of the 15 as the explanatory factor in their deaths, the Los Angeles Times subtitled its article on the 2003 New Year’s shootings by the NYPD: “At least three victims are black.” More relevant to the story would have been a headline reading: “At least three victims are criminals.”

Yet so twisted has race politics become in certain quarters that black criminality is nearly always excused for the higher good of finding and blaming some white perpetrator. After Wimpy’s robber Newsome was killed, about two dozen protesters surrounded the local franchise to blame the store for his death. “You got him killed,” they shouted, calling for a Wimpy’s boycott. “They killed children.” (Undoubtedly the many law-respecting residents of Harlem silently supported the police.)

Let’s imagine an alternative universe. Instead of stigmatizing the police, who every day risk their lives so that poor people can live free from crime, the so-called civil rights leadership would stigmatize criminals who prey on the poor. Instead of organizing vicious protests against officers who try to do their jobs in good faith, Sharpton, Barron, Jesse Jackson, and every city’s local cop basher would set up shop outside jails and courthouses to decry rapists, murderers, and robbers. Instead of glorifying young black thugs whose lethal behavior toward cops results in their own deaths, the black “leadership” would pressure parents to rein in their delinquent kids early on.

The six suspects in the Staten Island cop murders all had criminal histories, as did the four victims of the New Year’s cop shootings, Charles Sealey—and, undoubtedly, the killers of Ernesto Reyes and the current bodega sniper. Maybe if the moral climate in the inner city had been different, if stigma had been brought to bear earlier on these murderers’ lawless behavior, they would not have ended up killing or being killed. And such is indeed the fate that awaits many an inner-city thug—kill or be killed, almost always by another black criminal, not by the police.

The NYPD has done more for New York’s black community over the last nine years than Al Sharpton and Charles Barron ever have or will. By getting thousands of guns off the streets, as the unjustly maligned Street Crime Unit did and as the Firearms Investigation Unit (where detectives Nemorin and Andrews worked) now does, the NYPD has saved thousands of lives and allowed a semblance of normality to return to once terror-stricken neighborhoods. If the police had not brought murder and burglary in Harlem down 80 percent in the last eight years, Disney and other national retailers would not be opening stores on 125th Street, nor would middle-class home buyers be snapping up Harlem brownstones. No Sharpton protest has ever accomplished anything for anyone, except for himself. If he intends to be a presidential candidate, it behooves him to stand up unequivocally for the heroism of law-enforcement officers and denounce anyone who kills or dishonors them.

Immediately after the murders of Nemorin and Andrews, the officers in the Firearms Investigation Unit were back on the streets, putting their lives on the line, so that the “good people” in the inner city can go to work and raise their families safely. The police continue to believe in those “good people,” but bitterness is increasingly the legacy of their job. “We’ll see if any apologies come forward for the shootings,” sighed Brooklyn Detective Steve Hector after the slayings. “Somehow I don’t think so.” The cop baiters in the public arena, the media, and ghetto neighborhoods may think that they can indefinitely continue to impugn officers’ racial fairness without consequence, but they may find that officers’ oaths to sacrifice themselves for the community have their limits. 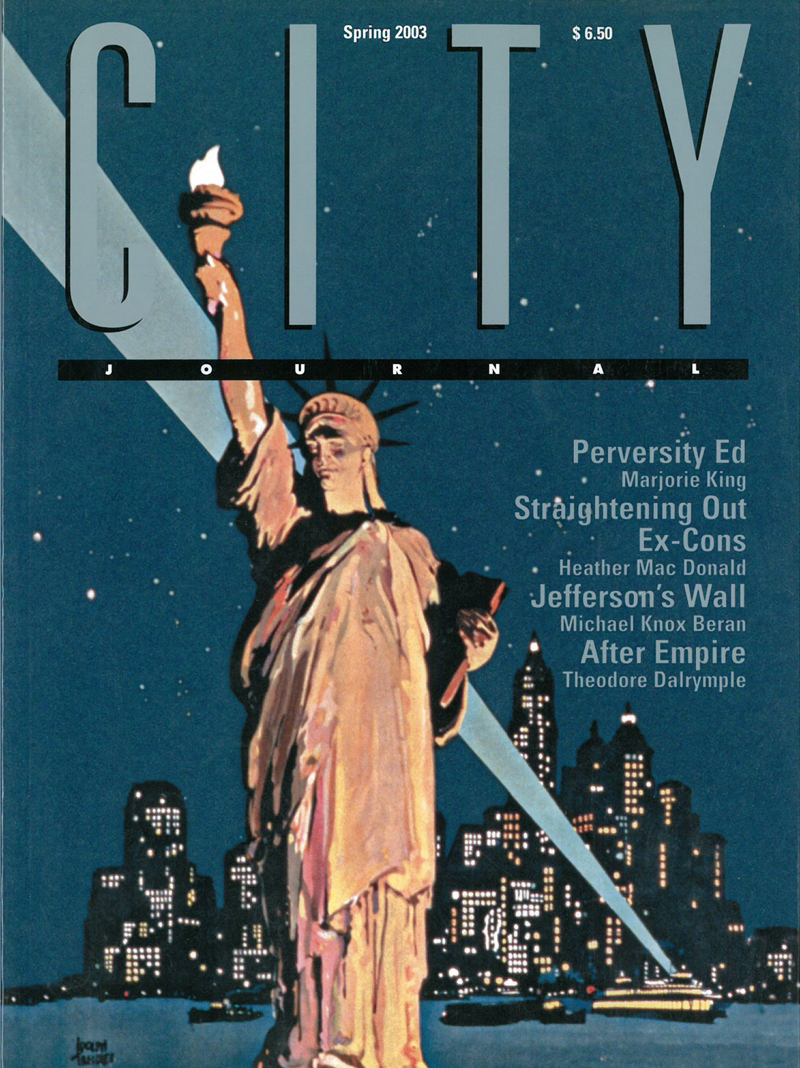