More than 15 years after long-struggling Philadelphia elected sometime reformer Ed Rendell mayor, the City of Brotherly Love has more murders per year than New York City, with just one-sixth the population. It’s the only major American city whose population shrank in the 1990s, and the only one where more people commute from the city to the suburbs than the other way around. It’s a town, as one Philadelphian put it, of “proudly low expectations”—which are rarely disappointed.

But now it looks as if Philly may at last be ready to embrace change. Democratic mayoral nominee Michael Nutter won a closely contested primary with the endorsement of every significant newspaper and good-government group, in a climate in which a majority of voters, not just for the general election but even in the Democratic primary, have identified crime as their Number One concern. (The general election is usually a formality in a city that hasn’t elected a Republican mayor since 1941.) A longtime foe of current mayor John Street, Nutter, a councilman since 1991, enjoys a reputation for seriousness and solid ethics—he introduced the legislation that created the city’s first ethics board—in a town famously short on both.

Nutter ran on a platform of lowering the extremely high tax and crime rates that have driven businesses and the middle class out of the city. That’s hardly the usual formula in a primary often decided by municipal workers, most of whom, by law, must live in the city and who thus make up the largest electoral bloc. But after the early front-runner, U.S. Congressman Chaka Fattah, a classic suit in search of an office, failed to generate momentum, the race boiled down to a black-white contest—as it almost always does in Philly. The chief rivals were Nutter (black) and businessman and former deputy mayor Tom Knox (white), with congressman and political fixer Bob Brady and state representative and longtime reformer Dwight Evans in the second tier. After the major press endorsements all went his way, Nutter pulled away from the wealthy Knox, who had contributed generously to his own campaign.

To get this far, Nutter has had to navigate the city’s zany, rough-and-tumble political culture. One example: a mystery man in a shark suit, calling himself “Tom the Loan Shark,” shadowed candidate Brady every day and held a press conference to announce that he’d been harassed by members of a union aligned with another candidate. Another: the aborted mayoral run of Mayor Street’s brother Milton, a hot-dog vendor under indictment for corruption and tax evasion, who’d taken advantage of his brother’s power to procure a major airport concession contract. And that’s not to mention Mayor Street himself, who, term-limited out of office, spent time and money to work with a political advocacy group aggressively attacking Nutter.

Nutter has the kind of reform agenda that people wrongly associate with Rendell, who entered office with a mandate for change and a city teetering on bankruptcy. Rendell immediately went to battle with the city’s powerful unions, which “hadn’t had a bad day in 30 years,” he charged. After winning significant concessions, though, Rendell aligned himself with Street, then the city council president. Rendell took care of downtown, which thrived, while Street ran the rest of the city as his private patronage kingdom. With his eye on higher office and his reputation secure, Rendell chose not to pursue the reforms that other innovative mayors enacted in the 1990s. He opposed welfare reform and did little to fight crime outside of downtown. Despite its beautiful architecture and skyline, Philly’s a city where a ten-minute walk from City Hall leaves you in Third World poverty, danger, and despair.

When the still-popular Rendell left the mayor’s office in 1999 to head up the Democratic
National Committee, Street, who’s black, ran
for mayor with his endorsement, winning by just 8,000 votes in a race against a white
Republican foe, Sam Katz. Street’s first term
was marked by graft and a series of colorful scandals, all of which led Katz to oppose
him again four years later. It seemed that rising frustration with Street theater—his declarations that “the brothers are running the city now” and that “you have to pay to play”—might shake out the handful of votes that Katz needed. Street trailed in polls.

But then came the incident that allowed Street to portray himself as a victim of Republican racism. With great fanfare, he announced that he’d found a bug in his office, which turned out to have been planted by the FBI as part of an ongoing corruption investigation. He then proceeded to solidify his support among black voters on the “at-least-he’s-our-bum” theory of leadership perfected by former Washington, D.C., mayor Marion Barry. Street spent the rest of the campaign bragging that he was just playing the game as it had always been played; in one debate, he cheerfully acknowledged that contracts went to friends first, just as under his white predecessors. Whom else would he give them to? His enemies?

Meanwhile, the city’s already out-of-control crime rate kept climbing. Murders rose from 330 in 2004 to 406 in 2006, and have gone up at a higher rate this year, even as crime continues to decline in big cities nationwide. Time rated Street one of America’s three worst mayors
in 2005. Philadelphia seems to have come to the same conclusion in the recent primary. Nutter won over Street’s opposition; several candidates pointedly attended screenings of The Shame of a City, a documentary that portrayed Street unfavorably; Street’s son, Sharif, lost a bid for an
at-large seat on the Philadelphia City Council, garnering a mere 7 percent of the vote; and Milton Street dropped his bizarre mayoral bid, which not even his brother backed, and ended up running against his nephew for the at-large seat, faring about as well. As one Philadelphia Inquirer columnist put it: “Rare is the twice-elected mayor who is as disliked, distrusted and dismissed as John Street.”

In some ways, Nutter inherits an easy job—he has plenty of low-hanging fruit to pluck by taking steps that other cities took years ago to reduce crime and cut taxes. Still, his proposal for an NYPD-like stop-and-frisk crime plan has met a ferocious response from the organized interests that have portrayed him as “not black enough” (Nutter’s reply: “I have a civil right not to be shot”), and a high-profile incident early on would be disastrous. Nutter also has a rough road ahead in throwing the elected bums out, as he’s promised to do, since he’ll need their support to change the laws governing their own behavior. And of course, Philadelphia has elected reformers before who’ve failed to survive its cutthroat political culture, most recently Rendell, who accomplished just enough to be elected governor but left the city little better off than he found it. But if there’s hope for Philly, it lies in Nutter’s breaking the political compact that goes back to Rendell and Street, in which Center City and the university neighborhoods remain safe and well patrolled, while much of the rest of Philly takes its chances. 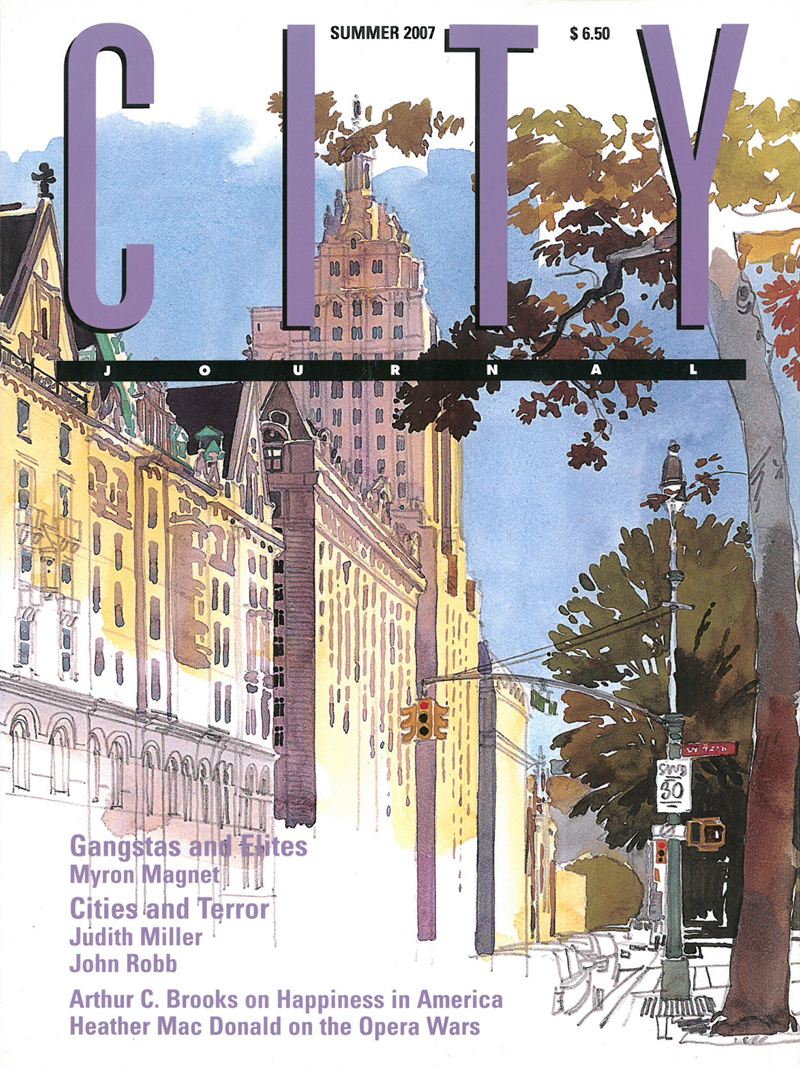 Harry Siegel, Fred Siegel Public-sector unions on one side, billionaires on the other
More on

Thom Nickels Philadelphia’s transients ride out the pandemic on the city’s public trains.

Gateway to the Wild West

Jordan Duecker The accelerating collapse of St. Louis, the most violent city in America