I visited a fourth-grade class in a slum school recently. Since I’m a storyteller by trade, the teacher asked me if I’d tell the kids a story. Now I’m a good storyteller and an all-around charming guy, no doubt, but I wasn’t prepared for the degree of fascination I inspired. Rambunctious mischief ceased on the instant and resolved itself into riveted attention and awestruck stares. I was awfully pleased with myself by the time I was done.

“Don’t take it personally,” the teacher told me brusquely. “It’s just that they’ve never seen anyone like you before. A man—obviously tough—who’s not a gangster.”

I don’t know how tough I am—they were fourth-graders; I guess I could’ve taken most of them in a fair fight one-on-one—but that’s not what she was getting at. Her point was that you have to take just one look at me to see what, in fact, I am: an unapologetic, because-I-said-so, head-of-household male. They used to call us “husbands” and “fathers” back in the day. That’s what these kids had never seen.

The teacher told me that she once had to explain to the class why her last name was the same as her father’s. She dusted off the whole ancient ritual of legitimacy for them—marriages, maiden names, and so on. When she was done, there was a short silence. Then one child piped up softly: “Yeah . . . I’ve heard of that.”

I’ve heard of that. It would break a heart of stone.

Beating poverty in America nowadays is largely a matter of personal behavior. Get a high school diploma, don’t have kids until you’re married, don’t get married until you’re 21, and you probably won’t be poor. It also helps if you work hard, show up on time, act courteously, and avoid anything felonious.

But where are these kids going to learn such things? It’s the stuff you just sort of absorb in a healthy, traditional, two-parent home, and that’s exactly what they’re missing. If they learn what they’ve lived, they’re done for—the girls too likely to “come out pregnant” like their mothers, the boys to be underemployed and maybe even do time.

You can’t legislate responsibility, either. Personal behavior in a free society has to be a matter of choice—choice without which there is no virtue—virtue without which a society can’t be free.

It seems to me that leaves these kids only one recourse: the culture. Where the institution of family is broken, only the surrounding culture can teach people the inner structures required for a life of liberty.

Many conservatives often seem to have given up on culture or not to care. There’s a strong strain of philistinism on the right. When we talk about “culture wars,” we usually mean preventing the courts from redefining marriage or promoting abstinence instead of birth control: culture, in other words, as the behavioral branch of politics.

Culture, in the true sense, is more than that. It’s the whole engulfing narrative of our values. It’s the stories we tell. Leftists know this. These kids get an earful from the Left every day. Their schools serve up black history in a way guaranteed to alienate them from the American enterprise. Their sanctioned reading list denies boys the natural fantasies of battling villains and protecting women from harm. Any instinct the girls might have that their bodies and their self-respect are interrelated is negated by the ubiquitous parable of celebrity lives. And I hardly need mention the movies and TV shows that endlessly undermine notions of manly self-discipline, feminine modesty, patriotism, and all the rest.

Conservatives respond to this mostly with finger-wagging. But creativity has to be answered with creativity. We need stories, histories, movies of our own. That requires a structure of support—publishing houses, movie studios, review space, awards, almost all of which we’ve ceded to the Left.

There may be more profitable businesses in the short run. The long run, as always, depends on the young. If you want to win their hearts, you have to tell them stories. I have reason to believe they’ll listen.

Andrew Klavan is a City Journal contributing editor and the author of such bestsellers as True Crime and Don’t Say a Word. His new novel, Empire of Lies, is due out in July. 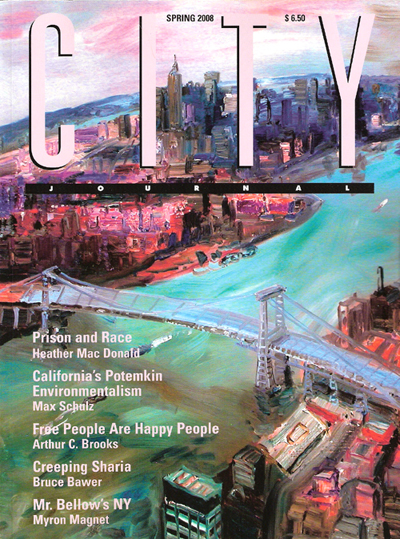