On a recent visit to New York, I bought The New York Times Guide to New York City. I read the following in its prefatory "brief history of New York": "Then in the early 1990s, for reasons still not fully understood, urban America, led by New York City, made a stunning comeback. The city's notorious crime rate dropped by 70 percent, while tourism, job creation and construction hit record highs." Modest agnosticism indeed, from a source not known for it. The Times guide refused to advance even tentative reasons for the comeback.

Might the guide's authors have been reluctant to recognize the reasons for New York's renaissance precisely because those reasons offered a powerful refutation of all the social ideas that the Times has peddled for three decades? Certainly, the decline in New York's crime rate owes nothing to the Times's own attitude toward crime: a mixture of lordly indifference, pusillanimity, and hostility toward the police, whom it depicts as neo-Nazis scarcely preferable to the criminals themselves, the latter having at least the excuse of being poor, downtrodden, and racially oppressed.

While in New York, therefore, I was surprised at the sensible way in which the Times's London correspondent reported the brutal murder there of a ten-year-old child, a killing that provoked national soul-searching: for London is fast descending into the same vortex from which New York has triumphantly emerged. Crimes of violence are rising as fast as the NASDAQ has fallen—and the Times is realistic about the causes, because the problem is 3,000 miles away.

A little boy called Damilola Taylor, who had arrived in London from Nigeria with his mother a month before, was stabbed in the femoral artery on his way home from computer lessons and left to bleed to death in the street by several passersby.

Damilola, by all accounts, was a quiet, studious, and well-behaved boy, who was for that reason mercilessly bullied by his peers. The most likely suspects—to the chagrin of the liberal press—were some youths of West Indian origin, rather than white racists. The case revealed to the wider public for the first time what students of such matters have long known: that relations between West Indians and West Africans in England are not altogether amicable. Ethnic minorities are not one big, happy, family united in the struggle against their overlords.

Astonishingly, the Times correspondent quoted a local leader of the West Africans in Peckham, where the murder took place. "Nigerian people are not popular in this area," she said, "because they try to fit in and do well. The West Indian community likes to pretend there is racism everywhere and black people are being held back. Anyone who doesn't subscribe to that point of view suddenly becomes a target."

Such a statement, of course, casts doubt on the entire liberal worldview of oppressed and oppressors, the former requiring a vast bureaucratic apparatus of restitution to rescue them from the latter. It suggests that, on the contrary, it is this very world picture that prevents progress and entraps people in a culture of impotent resentment.

Not long before the murder, a young man of Nigerian origin who became the first black actor to play Hamlet at the National Theatre related how at school his classmates of West Indian origin called him a "coconut" (black on the outside but white on the inside), simply because he tried his best to reach a high academic standard. His classmates regarded his successful efforts as betrayal or treachery rather than as a source of pride or self-respect.

The Times correspondent added that Peckham, where the Damilola murder took place, is one of London's most violent areas, and that it is short of police. This suggests that there might be some connection between a lack of proper policing and urban violence, a novel and disturbing thought for those who affect to believe that the poor need protection from the police more than they need the protection of the police.

Perhaps the Damilola case might give the authors of the next New York Times Guide to New York City a valuable clue as to why their city's fortunes improved, as well as warn them how that improvement could evaporate: for, as they say in Nigeria, no condition is permanent. What has been done can be undone. 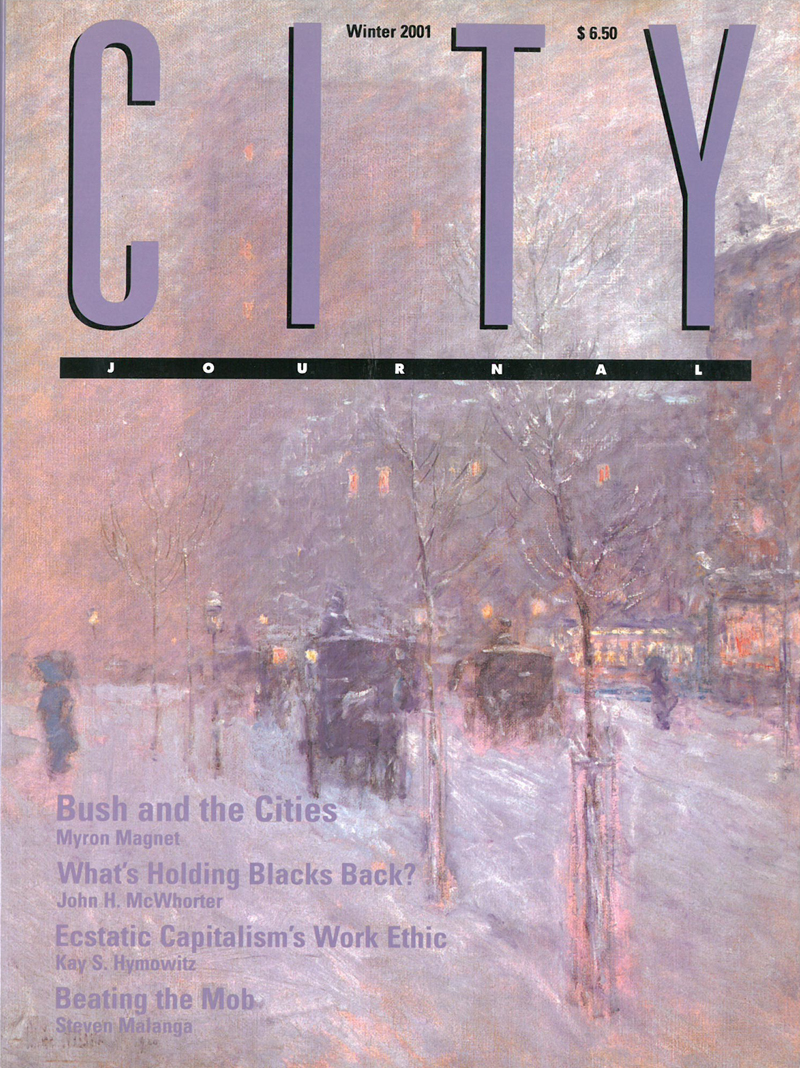