We stood in the vestibule—it was smaller than I remembered—that separated the church from the school.

“When you leave, come out this way,” the custodian said, gesturing to the double doors that led to the elementary grades. “The other exits are locked.” He was going to let me tour my old school—Holy Cross, in Deerfield, Illinois—solo.

The school, which I’d attended from grades one through eight, had closed in June, after 80 years of operation, a casualty of declining Catholic enrollments. I knew that the time had come for a trip back to Deerfield, where I’d grown up but moved from in 1981, at 15, scarcely returning in 37 years. “Way leads on to way,” Robert Frost wrote, and as year passed on to year, the 800-some miles separating my northeastern habitat from my midwestern hometown seemed ever longer—even as that hometown loomed ever larger in memory.

By August, when I was ready to make a trip, the building was shuttered. “It’s just halls and doors now,” a parish administrator told me, when I called. “No more visitors.” 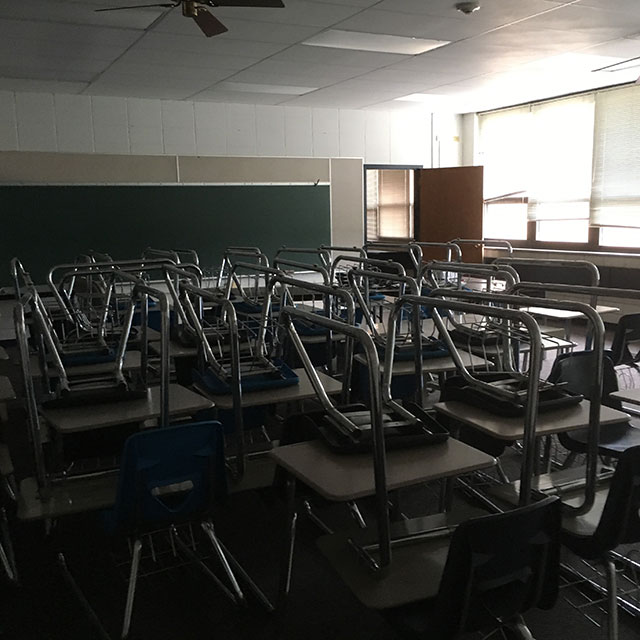 I would come anyway. I’d visit East Canton Court and Walden Lane; deposit a copy of my recently published book with the Deerfield Public Library, from which I once pedaled home, carting books; stand in Jewett Park’s center field and throw a baseball to home plate, reprising an attempt in the 1978 Little League championship game; eat an Original Launcher at Tony’s Subs and behold Deerfield Square, known to me as Deerfield Commons—and walk around Holy Cross, even if I couldn’t get inside.

That’s how it would have gone, but then a parishioner directed me to the kindly man who held the keys to the building, and here we were. I opened the elementary door and stepped through.

Deserted, but still lit, the space looked no different from the way it had in 1975, when we had returned in September, chattering about Jaws. Everything was the same: the wood grain of the doors, the boys and girls bathrooms’ signage, the tiny water fountains. I entered Room 107: Miss M.’s, the school’s most beloved teacher. Her disapproval, suffered rarely, took days to recover from.

Down the strange little ramp, still intact, past the boiler room governed by Al, the janitor, and on to the first-grade classrooms, their crucifixes hanging beside skunks and chipmunks; down to the small main lobby, which split in two directions—to the intermediate (grades five and six) and to the junior high, grades seven and eight. I ran my hand along the intermediate’s tan-brick walls. The empty principal’s office, where Sister Gloria had presided, was shorn of the authority it had held long ago, when a summons from her, over the intercom, got the pulse racing and the feet moving. 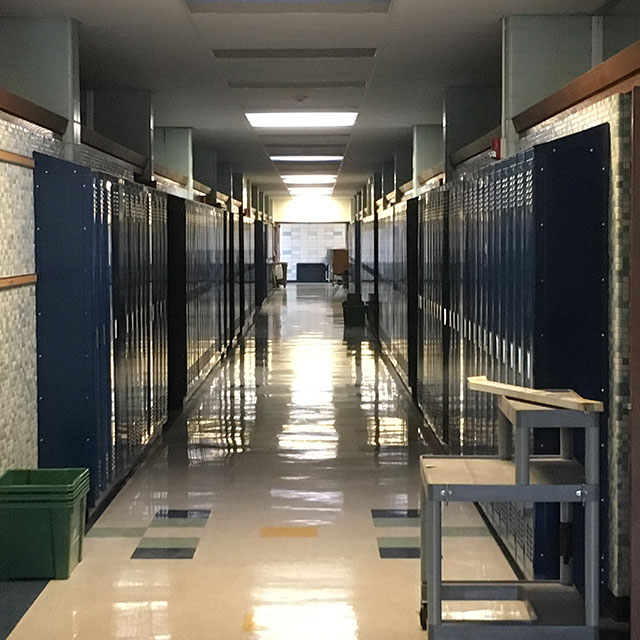 Finally, the double stairs leading to the junior high, its white-and-aqua-tiled walls unchanged. I opened the door onto the hallway and walked down its long expanse. The room numbers and their placards were just as they had been, six presidents ago. I stepped inside the rooms, their desks and chairs stacked up, remembering jokes, crushes, arguments, and half-expecting Sister B. or Miss Z. to appear.

Postings remained on the walls. Some were midwestern timeless: “Tornado Procedure: Second-floor students come down north stairs and move into first-floor corridor. Sit down on floor and face west.” Others were of a less local, more recent, vintage: “This is a peanut & tree nut allergy-awareness classroom.”

In a classroom near the end of the hallway, I found the blackboard poems, written by the last students Holy Cross would ever have—young ghosts leaving messages for an old ghost. I transcribed them. Each began, “Someday, when you read this,” and reflected on the school’s closing. “Someday, when you read this, you won’t hear the laughs and cries of the children. . . . Instead, you will hear profound silence.” The finale: “#RIPHC / Class of ’18!”

I walked back through the building, my mind crowded with names and faces from the past. They all were with me now, even more than they had been. Closing the double doors—last one out, HC, Class of ’80—I crossed Waukegan Road by way of Elder Lane and headed for Jewett Park, ready to warm up my throwing arm.

Paul Beston is the managing editor of City Journal and the author of The Boxing Kings.

Paul Beston Fifty years after the infamous crimes of his “family,” Charles Manson haunts American culture—but now Quentin Tarantino has something to say about that.
audio

A Radical Step in the Right Direction

Cultural Sensitivity for Me, But Not for Thee