The president of Emory University is the latest campus leader to grovel before narcissistic, delusional students, raising the question yet again: What do seemingly adult administrators so fear in their uneducated young charges?

Earlier this week, several dozen Emory students barged into the school’s administration building to demand protection from “Trump 2016” slogans that had been written in chalk on campus walkways. Acting out a by-now standardized psychodrama of oppression and vulnerability, the students claimed that seeing Trump’s name on the sidewalk confirmed that they were “unsafe” at Emory. College sophomore Jonathan Peraza led the allegedly traumatized students in a chant: “You are not listening! Come speak to us, we are in pain!” (This accusation of “not listening” was a thankfully toned-down version of the shriek “Be quiet!,” screamed by a Yale student last fall at her college master during an expletive-filled tirade.) As the Emory protesters entered the administration building, they drew on the Communist Manifesto (probably the only political theory they have even heard of) to express their pitiable plight: “It is our duty to fight for our freedom. It is our duty to win. We must love each other and support each other. We have nothing to lose but our chains.” 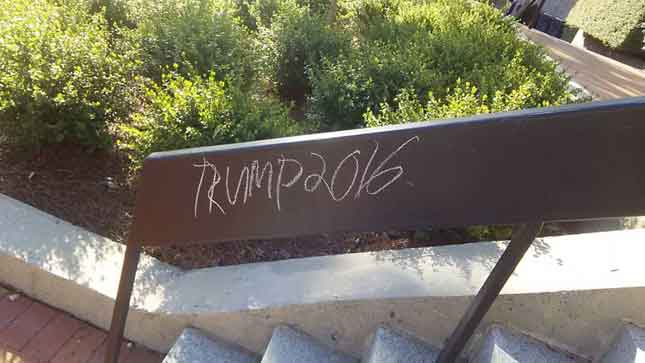 The order of the day was feelings. “What are we feeling?” protest leader Peraza asked his fellow sufferers, consistent with the neo-Victorian sentimentalism currently dominant on campuses. “Frustration” and “fear” were the answers. “I’m supposed to feel comfortable and safe [here],” a student told an Emory Wheel reporter. “I don’t deserve to feel afraid at my school.”

Showing the viral nature of student self-pity, the Emory protesters leveraged their Trump-induced “pain” and “unsafety” into the same demand for more diversity hires made last fall by Black Lives Matter student protesters on campuses across the country. The Emory students also picked up on an exculpatory meme most recently on display at Brown University: the claim that affirmative-action admits are not competitive scholastically because they are so burdened by the need to create safe spaces for themselves. An Emory student told President James Wagner that “people of color are struggling academically because they are so focused on trying to have a safe community.”

Put aside for a moment the students’ ignorant demand for protection from political speech. Their self-image as immiserated proletarians, huddled together for safety and support, is pure fantasy. In fact, they are the most privileged group of human beings in history, enjoying unfettered access to intellectual, scientific, and social resources that would have been the envy of every monarch in the age of absolutism. And any college adult who has any sense of his responsibility to fit his charges for an objective relationship to reality would seek to convey that truth. By contrast, rewarding students’ delusional self-pity only increases the likelihood that they will fail to take advantage of the enormous intellectual riches at their fingertips and go through life with self-defeating chips on their shoulders. But President Wagner followed slavishly in the footsteps of virtually every other college president confronted by student claims of “unsafety”—he rolled over completely.

After initially declining, to his credit, to send a campus e-mail decrying support for the “fascist, racist” Trump, Wagner nevertheless penned a grammar-challenged missive that validated every aspect of the students’ self-pity. He told the “Emory Community” that the students “voiced their genuine concern and pain in the face of this perceived intimidation” from the Trump chalkings, and that he “cannot dismiss their expression of feelings and concern as motivated only by political preference or over-sensitivity.” Therefore, he was announcing a four-point plan to “recognize, listen to, and honor the concerns of these students.” That plan included “a formal process to institutionalize identification, review, and addressing of social justice opportunities and issues,” as well as an annual Racial Justice Retreat and better procedures for reporting and responding to bias. The university would be reviewing security videotape to identify the chalkers and submit them to the “conduct violation process,” according to the Wheel, for possible violations of regulations requiring preapproval for chalkings. (That approval may not hinge on content.)

Wagner paid the usual lip service to free speech—only, as usual, to qualify it with “safe spaces” jargon: “As an academic community, we must value and encourage the expression of ideas, vigorous debate, speech, dissent and protest. At the same time, our commitment to respect, civility, and inclusion calls us to provide a safe environment that inspires and supports courageous inquiry.” Why does “courageous inquiry” require a “safe environment”? If inquiry is “courageous,” presumably it can withstand the pampered, hothouse climate of a college campus.

Any college president who adopts the rhetoric of “safe spaces” is already lost. Such rhetoric implies that there is somewhere on his campus that is not “safe”—a complete fiction. Wagner is an engineer by training, reconfirming that a science background, with its grounding in the empirical method, is of no use whatsoever in inoculating a college president against cowardice when facing student neurasthenia.

Wagner wrapped up his campus-wide message with another echo from Yale: a fawning paean to the protesters for teaching him so much. “I learn from every conversation like the one that took place yesterday and know that further conversations are necessary,” Wagner wrote, recalling Yale president Peter Salovey’s even more revolting love letter to the student harpies who had so violated the norms of civility by screaming and cursing at their college master. “In my thirty-five years on this campus, I have never been as simultaneously moved, challenged, and encouraged by our community—and all the promise it embodies—as in the past two weeks,” Salovey wrote last November, en route to promising more identity studies and diversity bureaucracy for Yale. “You have offered me the opportunity to listen to and learn from you.”

Obviously, the Emory students need some basic civics lessons in political debate. They are likely to encounter more names of candidates they deplore over the course of their adult lives. They will not have a campus bureaucracy to run to for protection, in what has become the reflex reaction of students today to any behavior they don’t like. The adult response to political speech that you disagree with is argument.

But the Emory students need something even more fundamental than an understanding of free speech and democratic persuasion. They need to gain some perspective on their own privilege and to stop feeling sorry for themselves. If a college leader is unwilling to help them toward that understanding of themselves and of reality, he does not belong in the office.

Heather Mac Donald is a contributing editor of City Journal and author of the forthcoming The War on Cops (Encounter Books).

Heather Mac Donald Despite ceaseless warnings on the left, Election Day came and went without right-wing violence.
More on