In 1991, Oklahoma City lost out to Indianapolis in the competition for a United Airlines maintenance base. Mayor Ron Norick wanted to know why. He was certain that Oklahoma City had put the most compelling financial deal on the table for United. The company answered that its decision had nothing to do with the subsidy package. Rather, United simply couldn’t imagine its employees living in a place as bleak as Oklahoma City. “The quality of life had sunk so low we couldn’t buy someone’s attention,” as current mayor Mick Cornett puts it. “No matter how many incentive dollars we put in place, corporate America wasn’t interested in us.”

Back then, the Oklahoma City economy offered little beyond the oil and gas industries, and the collapse of crude prices in the 1980s had hit the region hard. In response, area leaders created the Metropolitan Area Projects (MAPS), a series of efforts to improve Oklahoma City’s dowdy downtown. Funded by a temporary percentage-point increase in the local sales tax, MAPS was controversial but passed a public vote with a slim majority. The thought was, Cornett says, “If no one from the outside ever notices, at least we’ll have a better city for us.”

The city struggled to build the projects, which ran late and over budget. But the deadly 1995 bombing of the Alfred P. Murrah Federal Building created a new impetus to make the MAPS a reality. MAPS-financed improvements included renovations of the Civic Center Music Hall, the convention center, and the state fairgrounds. The city also built a new main library, a canal to help redevelop an old warehouse district, and a series of dams on its river to create recreational areas.

A unique aspect of MAPS is its pay-as-you-go financing structure (the city didn’t issue bonds). “This particular funding mechanism is debt-free,” Cornett stresses. The program also includes a citizens’ oversight committee, and the money from the special sales tax is kept separate from the city’s general fund, reducing the potential for political mischief.

Oklahoma City’s political culture is partly responsible for its conservative approach to financing MAPS. Like Norick before him, Cornett is a Republican. In fact, the city has had only Republican mayors since 1987. Yet governance in Oklahoma City isn’t particularly party-driven. The city technically has nonpartisan elections, and, Cornett says, “There isn’t much partisanship in our city hall or in general.” This may be part of the bombing’s legacy: it has produced a durable governing consensus that combines a willingness to invest in public capital improvements with a cash-in-advance financing approach.

This rejection of Tea Party–style attitudes toward government has led some to brand Oklahoma City’s leaders as “tax and spend Republicans.” But Cornett is unapologetic. “You wouldn’t necessarily think a string of Republican mayors would be pushing penny-on-the-dollar sales taxes, but we have.” And voters like what they see. After the original $350 million MAPS program, 61 percent of voters approved a $700 million second round directed toward building and renovating schools. And in 2009, voters approved MAPS-3, a ten-year, $777 million program to build trails, parks, and sidewalks in a city that mostly doesn’t have any. MAPS-3 passed with only 54 percent of the vote, though, and Cornett admits that it was “in some ways a tougher sales pitch.” The first two MAPS were born out of “desperation,” as he put it, but the third wasn’t as clear-cut. “We had to justify capital expenditures based on a city that we thought could be created—not one that we had to build but that we wanted to build.”

Though the oil and gas industries remain strong here, Oklahoma City now has a more diverse economy. The city is booming today, thanks to two decades of innovative and fiscally conservative governance. In 2014, the city’s unemployment rate was 4 percent, and it dipped as low as 3.3 percent earlier in 2015. Oklahoma City has grown its job base 13.5 percent since 2000, adding more than 73,000 new jobs, and has added population as well. In some ways, Oklahoma City’s success is a throwback to Republican urban governance of the early 1990s, when mayors like New York City’s Rudolph Giuliani and Indianapolis’s Stephen Goldsmith focused on delivering better public services and improving the quality of life in their cities. That’s a message that Republicans might need to recapture if they want to increase their limited appeal in urban America. 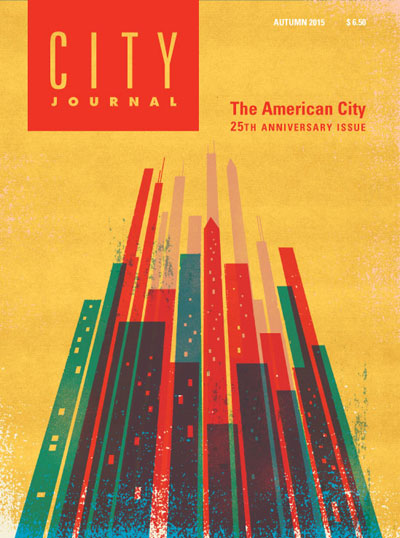