The Consolations of History

New York City is no stranger to monstrous incinerations. Some examples come immediately to mind, because they took place in the vicinity of what would become the World Trade Center.

In 1776, a hostile army occupied the city. The British general, Lord Howe, imposed martial law, ejected colonists from their dwellings to house his troops, and maintained tight watch on the city lest anyone have dark ideas about expanding the Revolution to its streets. Howe was a scrupulous, if ruthless, man, and people said that he thought of everything. But that wasn't true: he failed to maintain a fire brigade, and in September that year an accidental blaze destroyed almost a third of the city's housing, consuming wooden houses like so much kindling. Thereafter, the city fielded two firefighting companies, the Military Club and the Fire Club.

Ill-trained volunteers manned the clubs, though, and they moved too late and too ineptly with their buckets and pumps to stop an even wider conflagration in 1778. After this fire, thousands of dispossessed and destitute colonists made their way to "Canvas Town," a fetid arena of tents and jerry-built shacks that sprouted on Broad Street and continued west. An English visitor toured the scene with nose held high: "If any author had an inclination to write a treatise upon stinks," wrote Nicholas Creswell, "he could never meet with more subject matter than New York." Those with greater means and more acute sensitivities fled the city for shelter in neighboring territories. In 1779, inflation swept the town. The black market thrived; the price of food rose 800 percent; rents shot up astronomically.

All the while, General Washington and his troops were pressing on. By the summer of 1781 the tides of war had turned, and in October the Tories of Manhattan received the bad news that General Cornwallis had surrendered at Yorktown. The British retreated from New York; their sympathizers receded into the background.

The following year, the newly independent Americans streamed back to Manhattan. What greeted them was not very encouraging. As Edwin G. Burrows and Mike Wallace observe in Gotham: "Many streets, stripped bare of trees, were obstructed by trenches, redoubts, and other fortifications. Garbage and refuse lay everywhere. Wharves and warehouses had crumbled from years of neglect. The merchant fleet had all but vanished."

And yet: dwellings went up; businesses opened their doors on the charred ground. Within three years, overseas trade resumed with countries from China to Peru. A consortium of merchants created the Bank of New York to restore the city's infrastructure and underwrite new buildings. The Chamber of Commerce came back to life. These institutions helped bring the Whigs and Tories together—money has a way of reconciling opposites even as it repairs damage.

By the end of the decade, Government House, an imposing three-story building complete with waterfront promenade, stood at the former Battery site of a razed Anglo-Dutch fort. A theater opened on John Street, and bets now went down at the new Maidenhead racetrack near the Delancey mansion. The construction boom, the increase in speculators, the vast swelling in population—all testified to New York City's elasticity. An awed Philadelphia merchant wrote to New York banker Andrew Craigie, "More money is to be had in Your City" than anywhere else in America.

A more cataclysmic fire caught the city by surprise in the next century. On the frigid night of December 15, 1835, as children counted down to Christmas, coal gas leaked from a stove and ignited a five-story warehouse near the south waterfront. Flames leaped from roof to roof and quickly engulfed almost all of lower Manhattan. Before the now-professional firemen arrived, some 50 buildings were burning. More were about to go up. Shortly after midnight, the flames grew so intense that you could see them from New Haven to the north and Philadelphia to the south.

The fire brigades would have had little hope of containing the blaze under the best conditions; here they faced the worst imaginable. The temperature was 18 below zero. Water froze in the hydrants and cisterns, and when seawater was pumped into the hoses, it turned to ice before reaching the nozzles. Two weeks would go by before the city could completely extinguish the fire. By then, the flames had destroyed or damaged 674 buildings. Financial losses swelled to more than $20 million, an astronomical sum in those days—so astronomical, in fact, that, of the city's 26 fire insurance companies, all but three declared bankruptcy.

And yet: four days after the flames finally died, the stock exchange resumed trading. Workmen began to dig foundations for new buildings, sometimes while the earth was still warm. The moneyed Swiss brothers John and Peter Delmonico lost no time bemoaning the loss of their restaurant, the most elegant in town, but instead ordered a new establishment built. This one would be fit not only for a mayor but for an emperor: the new brick and brownstone building had ancient marble columns shipped in from Pompeii, unearthed only 20 years before.

In Albany, state authorities let New York float a $6 million bond issue, and more relief came in the form of low-cost loans. In the rush to build, property values skyrocketed. Manhattan real estate, valued at $143 million in 1835, was worth $233 million just one year later. The Greek Revival got a supercharged start in New York; even warehouses now came in granite, with iron shutters and walls so thick that fire wouldn't harm them.

Former New York mayor Philip Hone typified the beneficiaries of Gotham's rebuilding boom. He had purchased an elegant home across the street from City Hall for $25,000 in 1821, intending to stay there for the rest of his life. But the ambitious owner of the American Hotel next door wanted to expand his holdings and made Hone an offer he couldn't refuse. "I have turned myself out of doors," Hone wrote in explanation, "but $60,000 is a lot of money."

Once again, proof of New York's resilience was as tangible as stone. Walt Whitman, 16 years old when the great December fire raged, expressed astonishment at the splendor that now greeted him as an adult. "City of the world!" he proclaimed in Leaves of Grass, his love letter to New York. "For all races are here; all the lands of the earth make contributions here. City of spires. . . ."

More boom times lay ahead for the city of spires—as well as civic corruption, a civil war, and several minor and major financial troughs before the Great Depression of 1929, sandwiched between two world wars. None of these difficulties remotely compares to September 11, of course. The last abhorrence was not an act of God, like the fires, but an act of war on our soil. Nonetheless, when we look at the rubble of the World Trade Center, it is some consolation to read the lessons of history. More than once we have repaired the broken city and built marvels upon the ruins. Each time, a more prosperous New York arose.

The chattering classes have recently invoked the image of the Angel of Death to characterize this moment in our city. But with our collective refusal to bend before the destroyers, the image of the phoenix will prove more apt. 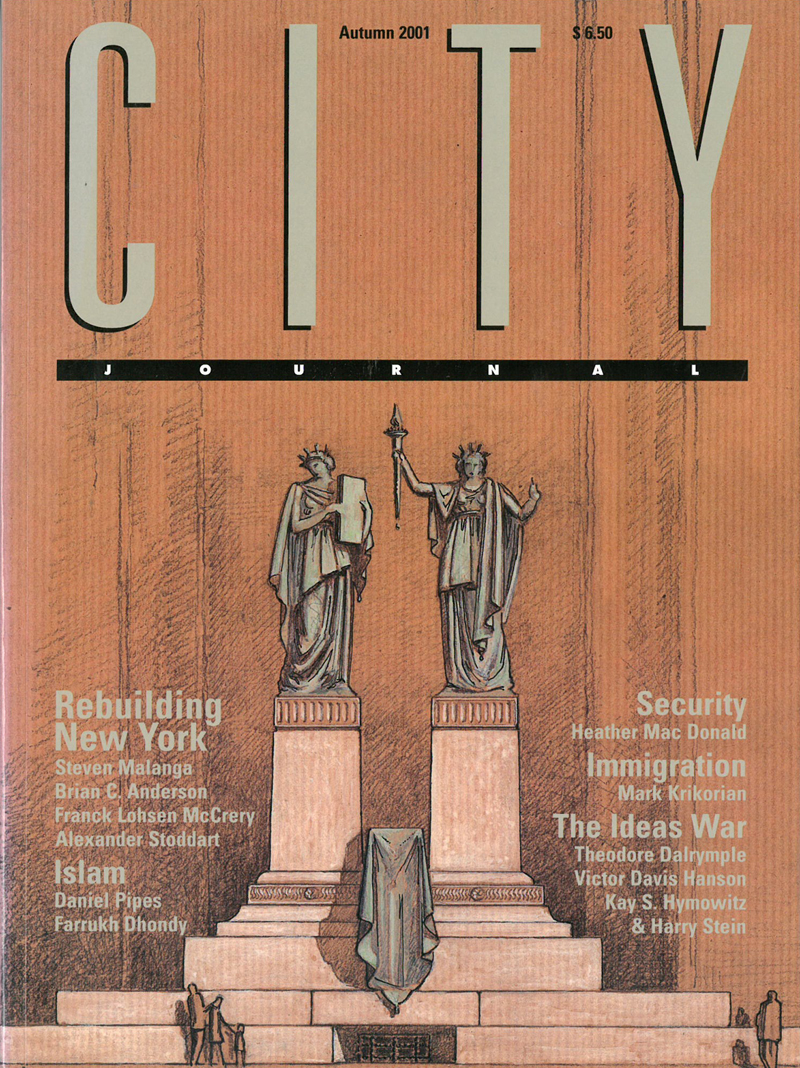