Municipalities across New York State face myriad financial problems, ranging from flat economic growth and stagnating tax revenues to expensive state mandates. It’s not surprising, then, that dozens of cities, counties, and towns, especially in upstate New York, have embraced a program allowing them to postpone billions of dollars of contributions into the state’s pension system. Unfortunately, the future cost may prove tough to repay. In the last fiscal year, 139 New York municipalities deferred $472 million in retirement-system payments, while the state government skipped another $937 million, according to state comptroller data. Since New York introduced what is euphemistically known as the “contribution-stabilization program” three years ago, governments have put off $3.3 billion in payments—apparently unconcerned that pension underfunding helped propel cities such as Stockton, California, and Detroit into bankruptcy.

The program lets governments “amortize” required payments into the pension plan over a period of ten to 12 years, to slow the budgetary impact of rising retirement costs. Though New York has one of the better-funded government-pension systems, its pension costs have rapidly swelled, thanks to the generous benefits that the state offers and the financial downturn in 2008 and 2009, which increased the system’s unfunded liabilities. Instead of paying off the pension system’s rising debt now, New York governments are borrowing money by deferring required contributions into the future.

Governments that have opted into the program say that they have little choice. “We have zero in economic growth here. Sales tax revenues are down; we’re under the constraint of a tax cap,” Elmira mayor Sue Skidmore said earlier this year, explaining her city’s participation in the program. She has lots of company. The city of Yonkers reduced its $60 million pension tab last year by deferring $21 million. “We have limited resources to pay the bill in full,” a Yonkers official admitted in April. The upstate city of Rochester—which has seen its pension costs more than double since 2010, from $20 million to $44 million—deferred $10 million in pension contributions last year. Monroe County, facing a $57 million bill last year, put off nearly $22 million in payments.

Pension systems typically moderate the effect of dramatic drops in financial markets by averaging or smoothing their assets over three to five years, which produces a gradual rise in contributions. But New York’s plan to defer debt over a decade is unusual and carries substantial risks, including the possibility that markets will decline again before debt from the previous downturn gets repaid. To remain healthy, the New York pension system must achieve a relatively high 7.5 percent annual rate of investment return. But a 2013 study by the benefits-consulting firm Cheiron concluded that Rhode Island’s pension system had only a 40 percent chance of achieving its similar projected 7.5 percent return over the next 20 years. If New York misses its target, the shortfall will pile new obligations on top of the current borrowings.

Facing criticism of the program, Governor Andrew Cuomo’s administration argues that pension costs will begin easing soon, thanks to recent state reforms that raised the retirement age by one year, to 63, for government employees; and to calculated benefits based on a worker’s final salary averaged over five years, instead of three. The reforms are modest, however, and apply only to new employees, so the savings will kick in slowly, as current workers retire. Further, the new pensions still offer a worker retiring at age 63 with 40 years of service an expensive pension benefit, equal to 75 percent of his final average salary.

Many local New York officials remain wary of the borrowings. A 2013 survey by the New York State Association of School Business Officials found that 90 percent of education districts said that they would avoid the program, if they could. One unnamed school official described the plan as “postponing the inevitable,” while another argued that it “shifts burdens onto the backs of future taxpayers.”

Local officials grumble that Cuomo and the state legislature have imposed a cap on municipal property-tax increases but have done nothing to relieve local governments of heavy state-mandated costs. Earlier this year, Maggie Brooks, the county executive of Monroe County, observed that state directives on Medicaid, pensions, and other programs constitute 83 percent of her budget. One challenge to cost-cutting is the Triborough Amendment (to a 1982 state law), which prohibits government employers from changing any provisions of a labor contract after it expires—and thus encourages unions to resist making wage and benefit concessions.

The comptroller’s bleak assessment raises the question of how communities with long-term fiscal woes will repay their pension borrowings. As former Rochester mayor William A. Johnson, Jr. told the Rochester-Democrat earlier this year: “You’ve got this perfect storm that’s building, and you know, nobody can really see the light at the end.” 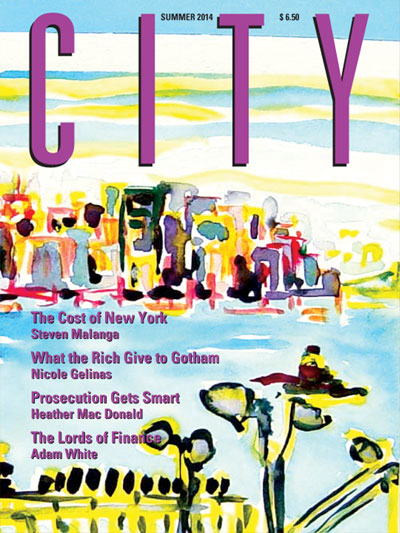