Back to Welfare’s Future in New York New York is embarking on an interesting policy experiment—interesting, that is, if you don’t have to live through it. Mayor Bill de Blasio intends to turn the city’s recent governing philosophy 180 degrees in the opposite direction and make New York a laboratory for so-called progressive politics, against a clear benchmark of conservative urban governance. We will see which approach works better.

This is not a perfect experiment, of course. De Blasio will benefit initially from the halo effect of the Bloomberg and Giuliani years. It will take time for the dynamism and prosperity that those two mayors created to fade. Businesses are not going to pick up and leave immediately, despite the warning signs on the horizon. Criminals are not immediately going to start carrying their guns again, but only after they’re good and sure that the city’s stop, question, and frisk policy has been permanently altered in their favor.

In fact, the only reason that de Blasio can indulge his and the voters’ progressive fantasies is that the conservative leadership of the past 20 years was so successful. This is a quite different situation from 1993, when Rudolph Giuliani rode into City Hall on the inability of Democratic mayor David Dinkins to stem the anarchy then engulfing New York. Had de Blasio run in 1993, his message of class resentment and police-bashing would have gone nowhere. Today, however, Michael Bloomberg has handed over to de Blasio the most crime-free big city in the country, the product of the greatest urban-policy triumph of the last half-century, which released New York’s energies as never before. And it is this success that has allowed voters to disregard the lessons of the last 20 years in favor of a preening redistributive agenda, forgetting that law and order can never be taken for granted—and that personal responsibility and entrepreneurship, not big government, are the cornerstones of urban vitality.

De Blasio’s repudiation of the Giuliani-Bloomberg policing philosophy has drawn extensive media coverage. Almost entirely ignored, however, is his likely demolition of another essential element of the New York turnaround: welfare reform. De Blasio has publicly opposed every element of the welfare policies that have put more New Yorkers into the workforce than ever before. When Giuliani became mayor in 1994, one in seven New Yorkers was on the dole. Eight years later, the welfare rolls were down 69 percent; they fell another 24 percent under Mayor Bloomberg, a reduction that went hand in hand, not coincidentally, with the crime drop. How did this happen?

Giuliani explicitly rejected New York’s prior welfare philosophy of unconditional entitlement and advocated instead a reciprocal social contract: taxpayers would help the needy, but the poor needed to help themselves as well. The most important element of this change was the concept that welfare recipients should work, or at least look for work, in exchange for benefits. Received wisdom had held that low-wage or workfare jobs were demeaning; welfare recipients should be asked, at most, to engage in what is euphemistically known as education and training, regardless of their capacity to work or the amount of time spent stalled in the same education program. Never mind that education and training had repeatedly been shown to be useless in getting welfare recipients off the dole. The City University of New York filled up with young unwed mothers on welfare who could barely read or write and who never graduated, while other students worked to put themselves through school.

Giuliani stepped up the city’s efforts to detect welfare fraud by requiring finger-imaging and in-person eligibility interviews. And he embraced the practice of diversion, which held that the best way to escape the dole was never to get on it in the first place. Rather than reflexively signing applicants up for benefits, caseworkers tried to find alternative means of assistance, such as a one-time cash grant or rental payment.

Giuliani’s frontal attack on the city’s welfare-industrial complex provoked a firestorm of protest and invective, which he blithely ignored. To Bloomberg’s credit, he maintained Giuliani’s welfare policies, if without Giuliani’s taste for ideological combat. His implicit belief in the dignity of every job, however, undergirded all his administration’s poverty policies. The Giuliani-Bloomberg philosophy embodied a unifying vision for New York—one that says that everyone but the most severely disabled can participate in the social fabric through work, that work is ennobling, and that it binds us to one another in a mutual system of exchange.

Now here comes de Blasio. The new mayor calls Bloomberg’s conviction that everyone should work for a living an “ideological hang-up.” He plans to reinstate education and training as core activities of welfare recipients. He fought Bloomberg’s insistence that food-stamp applicants be finger-imaged on the grounds that such a requirement was stigmatizing. Somehow, that stigma has not deterred hundreds of thousands of New Yorkers from seeking government employment, despite an identical finger-imaging requirement. And rather than divert applicants from welfare, de Blasio wants to sign up even more people.

He will ask Obamacare outreach workers to enroll Obamacare applicants in all possible welfare programs, and he believes that the city’s nearly 2 million food-stamp recipients are at least a quarter-million too few. Far from stressing personal responsibility, as Mayor Giuliani did, de Blasio believes that it is government’s role to “provide basic income and food security to all New Yorkers.” No wonder de Blasio views private-sector experience as a disqualifier for working in his administration; the private sector competes with his vision of a society in which all initiative resides in the government. De Blasio will likely eviscerate performance contracting, whereby the city paid its for-profit and nonprofit social-services partners only if they actually moved welfare recipients into jobs. Instead, expect a return to the racial spoils system, whereby feckless neighborhood nonprofits were given indefinite city contracts based on identity politics and get-out-the-vote capacity alone.

We don’t need to guess how de Blasio’s welfare philosophy will pan out. New York has been down this road before. In 1960, 328,000 New Yorkers were on cash assistance. By 1972, after two terms of Mayor John Lindsay, the rolls had exploded to nearly 1.25 million. One in every ten welfare recipients in the United States lived in New York City. As de Blasio promises to do again, Lindsay dismantled the city’s welfare-fraud detection system, leading the Daily News to dub his welfare commissioner “Come-and-Get-It Ginsberg.” Lindsay sniffed that asking welfare recipients to work would return the city to the “dark ages.” What emerged from the Lindsay years was a true tale of two New Yorks, in which an ever-diminishing taxpayer base supported an ever-growing dependency class that lived outside the norms of bourgeois society. Today’s welfare rolls stand at 348,000—barely over the level of 1960, before the entitlement mentality took over large swaths of the New York population. Watch that number, as well as the city’s crime data, to see how de Blasio’s progressive experiment is faring. 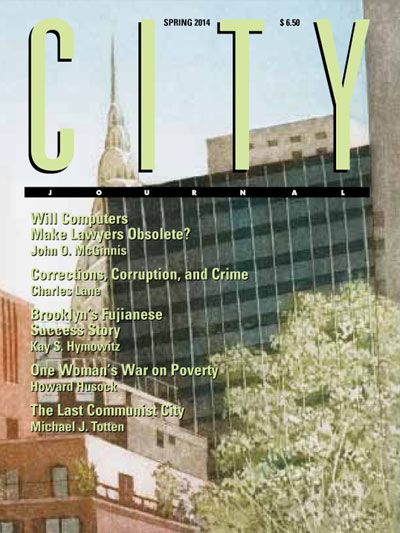